The Canadian dollar expects another rather calm week, but with one key event to rock it – GDP. Here’s an outlook for the Canadian events and an updated technical analysis for USD/CAD, now on higher ground. 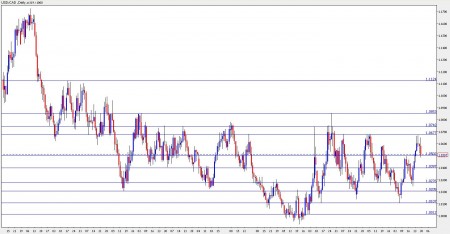 Weak retail sales and the growing notion of a double dip recession in Canada’s main trade partner – the US, hurt the Canadian dollar. Will it recover? Let’s start:

The Canadian dollar had a bad start to the week – USD/CAD broke above the 1.05 resistance line (mentioned in last week’s outlook) and challenged the 1.0680 twice. Towards the end of the week, USD/CAD dropped and closed just above the 1.05 line.

Looking up, the 1.0680 line became a stronger line of resistance after being tested twice in the past week. It was also a stubborn resistance line at the beginning of July.

Looking down, 1.04 is a veteran line of support and resistance, and currently works as support. Below, the 1.0280 proved to be rather strong in recent months, and is the next line of support.

The ultimate line of support is parity – which seems far now.

I turn neutral on USD/CAD.

The Canadian economy cannot keep pushing forward as its main trade partner is still behind. Recent retail sales showed it. While the situation is still OK in Canada, more range trading seems likely at the moment.

The Canadian dollar expects another rather calm week, but with one key event to rock it - GDP. Here's an outlook for the Canadian events and an updated technical analysis for USD/CAD, now on higher ground. USD/CAD daily chart with support and resistance lines marked. Click to enlarge: Weak retail sales and the growing notion of a double dip recession in Canada's main trade partner - the US, hurt the Canadian dollar. Will it recover? Let's start: Current Account: Published on Monday at 12:30 GMT. This is a late figure in comparison in comparison with the related trade balance figure,…

USD/CAD Weekly Forecast: Confluence at 1.26 to Catch Bids Before NFP