USD/CAD reached parity but couldn’t close below this level in a nervous week, after it bounced off downtrend support. Will the pair continue south? Ivey PMI, Trade Balance and employment claims are the highlight of this week. Here is an outlook on the major market-movers and an updated technical analysis for USD/CAD.

Last week Canada’s gross domestic product disappointed with a 0.1% rise in May after expanding 0.3% in April, amid small gains in retail trade and the financial sector. Overall manufacturing dropped 0.5% and construction also declined by 0.2%. Economists expected a 0.2% growth rate. Is this a temporary relapse or a beginning of a downside trend?

Updates: Monday is a Bank Holiday in most of Canada. Building Permits and PMI will be released on Tuesday. The USD/CAD is choppy as we begin the trading week. The pair was trading at 1.0013. The loonie edged higher, as USD/CAD dropped back below parity. The pair was trading at 0.9987. After a strong July reading, Building Permits dropped 2.5%. However, the Ivey PMI sparkled at 62.8 points, a four-month high. The reading easily beat the estimate of 52.0 points. BOC Governor Carney will be speaking at a conference in London later on Wednesday. The loonie edged higher, as USD/CAD was trading at 0.9967. Three releases will be published later on Thursday, including Trade Balance. The markets are expecting little change in this key indicator. USD/CAD is choppy, as the pair was trading at 0.9948. 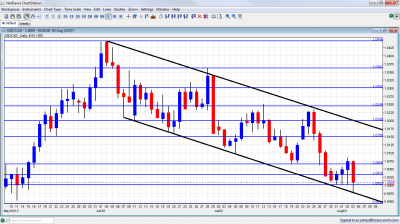 Dollar/CAD started the week above the 1.0030 line (mentioned last week) before making repeated attempts on parity. Only after rising higher, the fall that followed found the pair temporarily below parity, before closing at 1.0009.

1.0150 was a swing low in September and worked as resistance several times afterwards. It was challenged in June 2012. and served as a separator in July 2012.

1.0066 was key support before parity. It’s strength during July 2012 was clearly seen and it gave a fight before surrendering. Now, it is somewhat weaker. 1.0030 is another line of defense before parity after capping the pair earlier in the year. The move below this line is not confirmed yet.

The very round number of USD/CAD parity is a clear line of course, and the battle was very clear to see at the beginning of August 2012.  Under parity, we meet another pivotal line at 0.9950. It served as a top border to range trading in March 2012 and later as a line in the middle of the range.

As you can see on the graph, the pair is trading in a downwards channel that began at the beginning of June. The pair bounced off downtrend support towards the end of the week, making it even more important. Downtrend support is more significant than downtrend resistance. It’s important to note that the pair is close to support now.

Even if the optimism in Europe towards massive ECB bond buying fades, Canada’s fundamentals certainly support it: higher demand from the US that enjoyed a good jobs report, higher oil prices and an economy that continues growing. Employment is critical.

USD/CAD reached parity but couldn't close below this level in a nervous week, after it bounced off downtrend support. Will the pair continue south? Ivey PMI, Trade Balance and employment claims are the highlight of this week. Here is an outlook on the major market-movers and an updated technical analysis for USD/CAD. Last week Canada's gross domestic product disappointed with a 0.1% rise in May after expanding 0.3% in April, amid small gains in retail trade and the financial sector. Overall manufacturing dropped 0.5% and construction also declined by 0.2%. Economists expected a 0.2% growth rate. Is this a temporary…