A few interesting releases expect the loonie. Here’s an outlook for the Canadian events, and an updated technical analysis for USD/CAD. 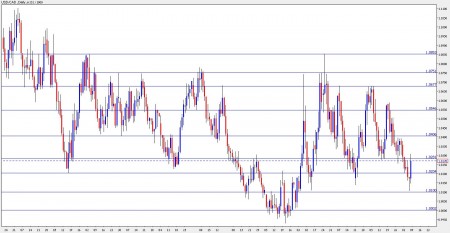 Canada’s employment figures were very disappointing, and only a bigger disappointment in Non-Farm Payrolls from the US stopped USD/CAD from going higher. Let’s start:

Tight range trading, between 1.0280 and 1.02 characterized the pair’s trading at the beginning of the week. It then broke below 1.02 and got close to the next support line of 1.01 before bouncing back up and closing at 1.0270.

Looking down under 1.0280, the 2009 low of 1.02 is the next support line. Note that it also worked as resistance after the pair hit parity in April. Lower, 1.01 is a minor line of resistance, and it’s followed by the ultimate support line – parity.

Despite the blow from the employment figures, the situation in Canada is still great, and the Federal Reserve could weaken the greenback, sending USD/CAD for another attempt on parity.

A few interesting releases expect the loonie. Here's an outlook for the Canadian events, and an updated technical analysis for USD/CAD. USD/CAD chart with support and resistance lines marked. Click to enlarge: Canada's employment figures were very disappointing, and only a bigger disappointment in Non-Farm Payrolls from the US stopped USD/CAD from going higher. Let's start: Housing Starts: Published on Tuesday at 12:30 GMT. This important housing sector figure always rocks the loonie. After peaking at 201K, the annualized number of starts fell to 193K. A small rise is expected this time. A jump back above 200K will sure help…