USD/CAD dipped into lower ground in the past week. The rate decision, BOC Press Conference, inflation data and retail sales are the highlights of a busy week. Here’s an  outlook  for the Canadian events, and an updated technical analysis for USD/CAD. 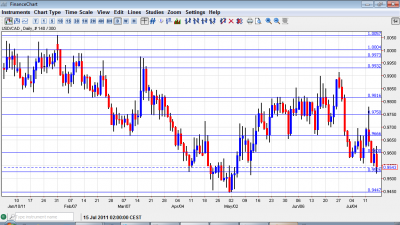 The Canadian dollar started the week retreating (cadusd falling). USD/CAD temporarily breached the 0.9750 line (mentioned last week), but this was short lived. It then changed direction and fell as low as 0.9550 before bouncing.

Distant and minor resistance, above parity, appears above parity, at 1.0060. This was the highest level in 2011 and is getting further away.  The very round number of USD/CAD parity is the obvious line below, although it isn’t too strong.

0.9816 capped the pair over and over again, but after temporarily failing to hold three weeks ago. It is somewhat weaker.  0.9750 was a very distinctive line earlier, separating ranges in a great way. The break above this line just now was temporary and short lived.

0.9667 was a cushion in March and later worked as resistance. This line provided support a few weeks ago, and had an important role in holding back recovery attempts, including a very recent one. 0.96 was a minor support line that played a role earlier in the year. After being broken, it worked very well as resistance. The same scenario repeated itself more than once.

The  prices of oil  refuse to fall, no matter what, in this helps the loonie. More importantly,  Canadian jobs are on the rise, and this is significant for the loonie. While the US economy is still dragging its legs, the low chance of QE3 also indirectly helps the Canadian dollar.

USD/CAD dipped into lower ground in the past week. The rate decision, BOC Press Conference, inflation data and retail sales are the highlights of a busy week. Here's an  outlook  for the Canadian events, and an updated technical analysis for USD/CAD. Last week Canadian housing starts rose unexpectedly amid strong sales activity in Ontario reaching 197,400 new building starts following 194,000 inthe previous month. The prosperous housing market continues to thrive despite the restrictions on mortgage lending issued at the beginning of 2011. USD/CAD  daily chart with support and resistance lines on it. Click to enlarge: Let's Start: Foreign Securities…