The rate decision is the highlight of a very busy week in Japan. Here’s an outlook for the Japanese events and an updated technical analysis for USD/JPY. 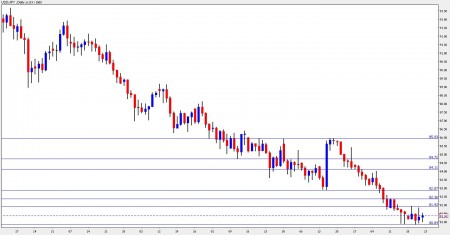 The Japanese yen enjoyed the return of risk aversion in the past week, and dropped even lower. Will it reach all time lows, or will another yen intervention occur? Let’s start:

A rise at the beginning of the week stopped at the 81.92 line (a new line that didn’t appear last week), but the USD/JPY continued south and went as low as 80.84 before closing at 81.36, almost at the same level as last week.

80.84 is the fresh 15 year low, and serves as support. Below, the historic lows await the Japanese yen, and could trigger an intervention.

Looking up, the past week’s peak of 81.92 provides immediate resistance. It’s followed by 82.36, which capped the pair earlier this month. Above, 82.87 was the line where the BOJ intervened. It now serves as a strong line of resistance.

Higher, 84.11 is a minor resistance line, after working as such a few weeks ago. 84.72 follows – it provided support in August and also way back in 2009. The next significant line is 85.93, the peak that USD/JPY touched after the intervention.

I remain bullish on USD/JPY.

The small recovery of the US dollar translated into stability in USD/JPY in the past week. Following the G-20 meetings, Japan reiterated to “act as needed” to boost its economy, continuing the forex war. If there isn’t an intervention, a  strengthening  dollar could send the pair higher this week.

The rate decision is the highlight of a very busy week in Japan. Here's an outlook for the Japanese events and an updated technical analysis for USD/JPY. USD/JPY daily chart with support and resistance lines marked. Click to enlarge: The Japanese yen enjoyed the return of risk aversion in the past week, and dropped even lower. Will it reach all time lows, or will another yen intervention occur? Let's start: Trade Balance: Sunday, 23:50. Japan continues to enjoy a surplus in its trade balance, despite the strength of the yen. This surplus is expected to squeeze from 590 billion to…

USD/JPY Weekly Forecast: Paring Gains Despite a Big Rally Above 116