One of the leading lights of the DeFi space, Aave, is an open-source, non-custodial lending protocol. As per DeFi Pulse, its the third largest protocol in the space, with around $1.45 billion locked in. Aave is currently in the middle of a rebranding process as it plans to migrate from its governance token LEND to its new and improved avatar AAVE. The protocol handed over the voting rights to the community to see if they really wanted this change.

This changeover allows users to earn income by staking the new AAVE tokens in a reserve via a “Safety Module.” To do this, users need to give up their existing LEND holdings and receive AAVA at a ratio of 100 LEND to 1 AAVE.

The community seems to have overwhelmingly greenlit this migration.

The proposal has been approved by 100% of the votes and further announcements are expected this Friday. 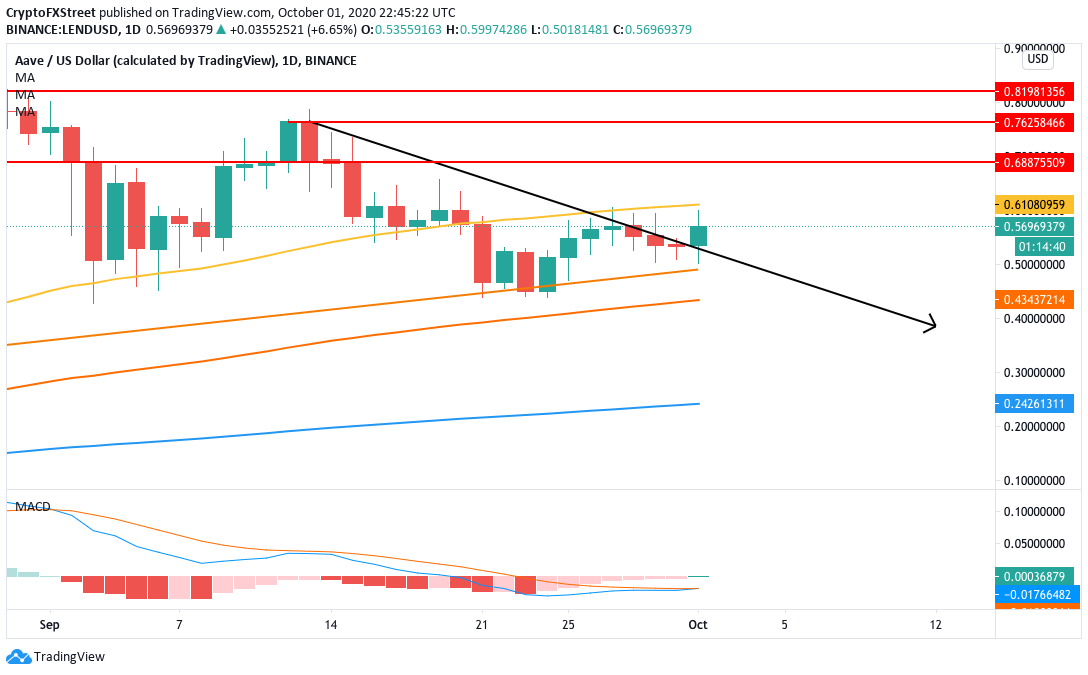 LEND/USD went up from $0.53 to $0.56, breaking above the downward trending line in the process. The buyers are now going to aim for the SMA 50 curve ($0.61). The MACD shows that the market momentum is about to reverse from bearish to bullish, which will give the buyers enough firepower to make this move. 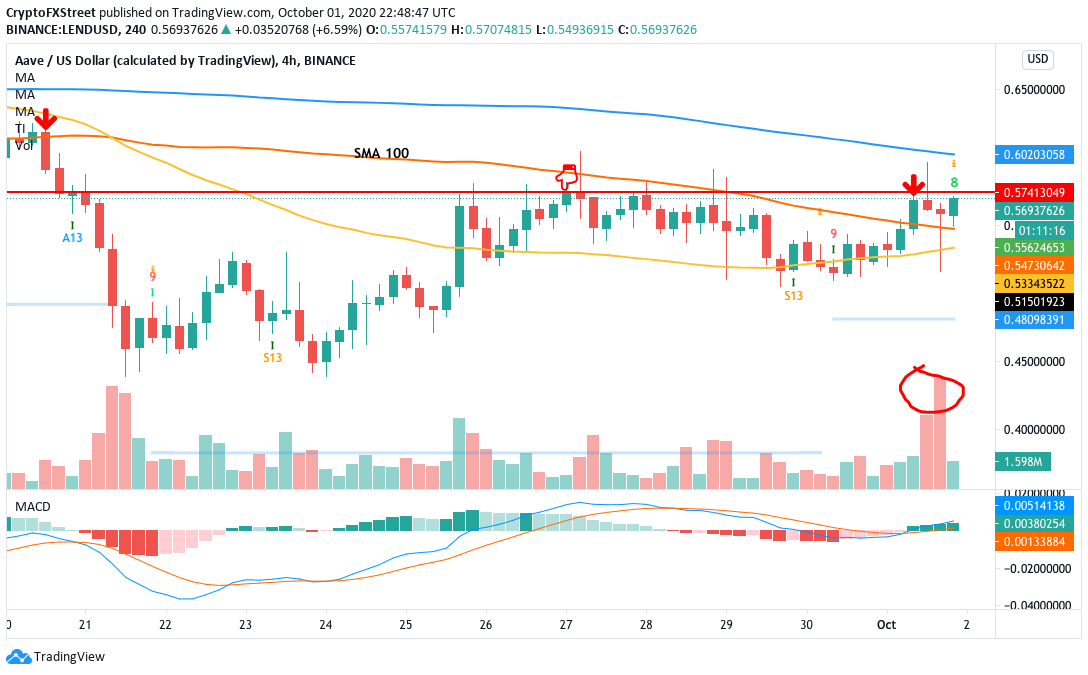 In the 4-hour chart, LEND has managed to cross above the SMA 100 curve for the first time since September 20. As of now, the $0.57-level acts as a significant psychological barrier for the DeFi lending protocol in this time-frame. The price is already floundering from selling pressure as it approaches this level, as signified by the two tall bearish volume spikes. On the flip side, if the buyers ride the positive momentum wave and break past the 0.57 resistance level, they should easily reach the SMA 50 curve at $0.60.

However, the TD-sequential indicator can throw a monkey wrench at our bullish thesis. As shown in the chart, the TD will be flashing a sell signal in a little over an hour. However, the SMA 100 should provide healthy support and absorb a tremendous amount of selling pressure in that case.

In fact, to get a better understanding of the potential price movement, let’s take a look at LEND’s IOMAP.

IntoTheBlock’s “In/Out of the Money Around Price” (IOMAP) model reveals there are strong support walls underneath LEND that could absorb a significant amount of selling pressure and keep the price up. The immediate support level lies at $0.55, where previously 1,800 addressed had purchased 31.44 million LEND tokens.

On the upside, we have a moderate-to-strong resistance wall at $0.57 (as previously validated in the 4-hour chart). In this level, nearly 1,490 addresses hand bought roughly 24.29 million LEND tokens. If the buyers break above this level, the next noticeable resistance they will face will be $0.625.

It’s not all sunshine and rainbows

While things look pretty good for Aave right now, there is one worrying indicator that we should definitely take into account.

IntoTheBlock’s “Daily Active Addresses” model shows that the number of new addresses created on the Aave network topped-out on August 12 at a high of 1,250 addresses per day, calculated on a 3-month trailing average. Since then, Aave’s network growth has declined by new active addresses per day.

At press time, only 248 new addresses were created based on this trailing average, which can be considered a significant bearish sign for LEND.