The release of employment data is the main event for the rising Aussie. Here’s an outlook for the Australian events, and an updated technical analysis for AUD/USD. 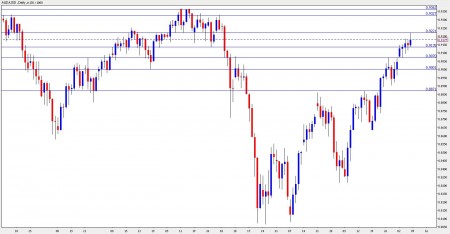 Glenn Stevens left the interest rate unchanged at 4.50%, exactly as expected. The Aussie enjoyed other figures and US weakness to rise. Will this continue? It now depends on jobs. Let’s start:

The Aussie began the week with a storm, jumping above the 0.9070 it struggled with in the previous week. It then traded in a tight range between 0.9070 to 0.9135, and it eventually broke this strong barrier as well. After touching the next resistance line of 0.9220 it closed lower, at 0.9177.

Looking down, 0.9070 now turns into a support line, after capping the pair recently. Below, the round number of 0.90 is the next support line – it was also a swing low in March.

Lower, 0.8870 was a stubborn resistance line in June and in July and now works as strong support. There are many more lines below, but they’re too far at the moment.

Above 0.9220, the next line one of the most persistent lines – 0.9327, which first capped the pair in October 2009, and continued being tested many times afterwards.

Australia continues to enjoy a surplus in its trade balance, a high interest rate, and it should receive a boost from job data, which tends to exceed expectations.

Read Review
Open My Free Account
Your capital is at risk.
AUD/USD Forecast

The release of employment data is the main event for the rising Aussie. Here's an outlook for the Australian events, and an updated technical analysis for AUD/USD. AUD/USD chart with support and resistance lines marked. Click to enlarge: Glenn Stevens left the interest rate unchanged at 4.50%, exactly as expected. The Aussie enjoyed other figures and US weakness to rise. Will this continue? It now depends on jobs. Let's start: ANZ Job Advertisements: Published on Monday at 1:30 GMT. Delayed from last week. This unofficial employment gauge serves as warm up for the official job figures due 9 days later.…

AUD/USD Weekly Forecast: Bears to Extend Losses to 0.72 Before FOMC

AUD/USD Crumbles Beneath 61.8% Fibonacci Level Despite Weaker US Inflation

AUD/USD Trades Choppy at 0.7365 ahead of RBA Gov Lowe Speaks