Four events await Aussie traders in the upcoming week. Here’s an outlook for these events and an updated technical analysis for AUD/USD. 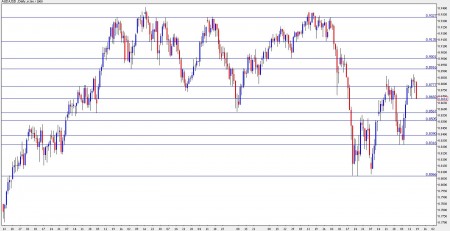 From the close at the support / resistance line, the Aussie can go back up and make another attempt towards 0.8770, which provides immediate resistance. Stronger resistance is found at 0.8915 which worked as a support and resistance line many times in the past.

The Australian fundamentals, including the strong job market and also the recovering housing sector, continue to shine on Australia.

Four events await Aussie traders in the upcoming week. Here's an outlook for these events and an updated technical analysis for AUD/USD. AUD/USD daily chart with support and resistance lines marked. Click to enlarge: Australia's home loans finally rose. This positive figure joined the employment figures we've seen beforehand and boosted the Aussie. Monetary Policy Meeting Minutes: Published on Tuesday at 1:30 GMT. We've seen two consecutive months of pauses in rate hikes, something that didn't happen for quite a while. The minutes will show us what the different members think of state of the economy, and more importantly, when…