Bitcoin price capitulates while whales buy BTC at a discount

Bitcoin price has rallied over 40% from yesterday’s intra-day low to the price at time of writing ($41,728) but remains almost 35% below the all-time high of $64,899 printed on April 14. The substantial rebound has alleviated some of the pain of the past two weeks, but it has not clarified the outlook for the bellwether cryptocurrency moving forward.

Bitcoin price crashed 53.7% from the all-time to yesterday’s low, making it the 5th largest decline for BTC in its relatively short history, according to Coin98 Analytics. Such violent moves in a condensed period are consistent with panic selling built on forced liquidations driven by cascading margin calls. 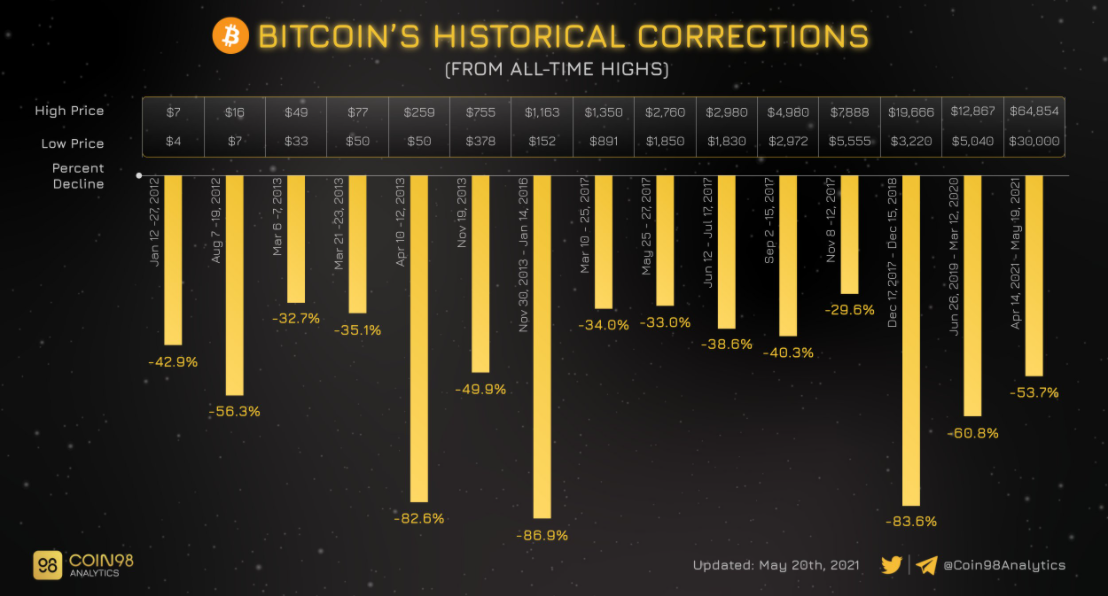 The chaos on the major platforms left investors infuriated. Some tried to buy the decline while others tried to either adjust their stops to accommodate the selling or liquidate holdings. Instead, they were forced to be spectators.

BTC open interest on Bitmex experienced the most significant drop in 2021 and the largest since 2020. It highlights the size of positions being closed, largely due to forced liquidations. 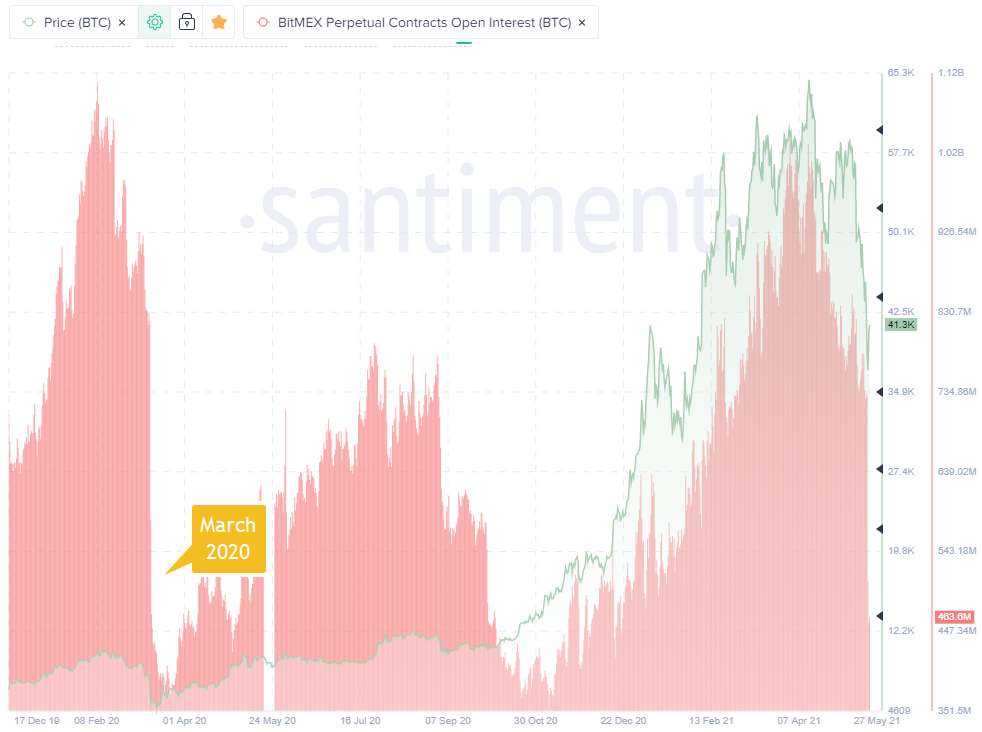 The market value to realized value (30day) shows the average profit or loss of those holding BTC tokens that moved in the last 30 days, based on the price when each token last moved.

During this crash, the metric fell into an extreme undervalued zone. The decline did offer an excellent risk-reward opportunity, at least for the tactical investor. Time will tell if it was beneficial for the longer-term orientated investor.

According to Philip Gradwell, a bullish development during the decline was that investor whales were buying the dip, accumulating 34k BTC on Tuesday and Wednesday after cutting their positions by as much as 51k bitcoin in the last two weeks. 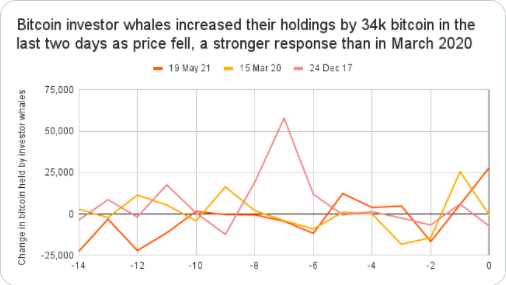 As with all major market events, investors and experts question whether it is the end for the specified asset class or a new beginning. Bitcoin price will dictate whether it was another violent correction in a long process of adoption and acceptance as a long-term investment opportunity and, ultimately, a relevant and credible store of value.

Yesterday, Bitcoin price closed with a bullish hammer candlestick on the four-hour chart. A buy signal was triggered on the following candlestick when BTC traded above the hammer high before stalling at formidable resistance. 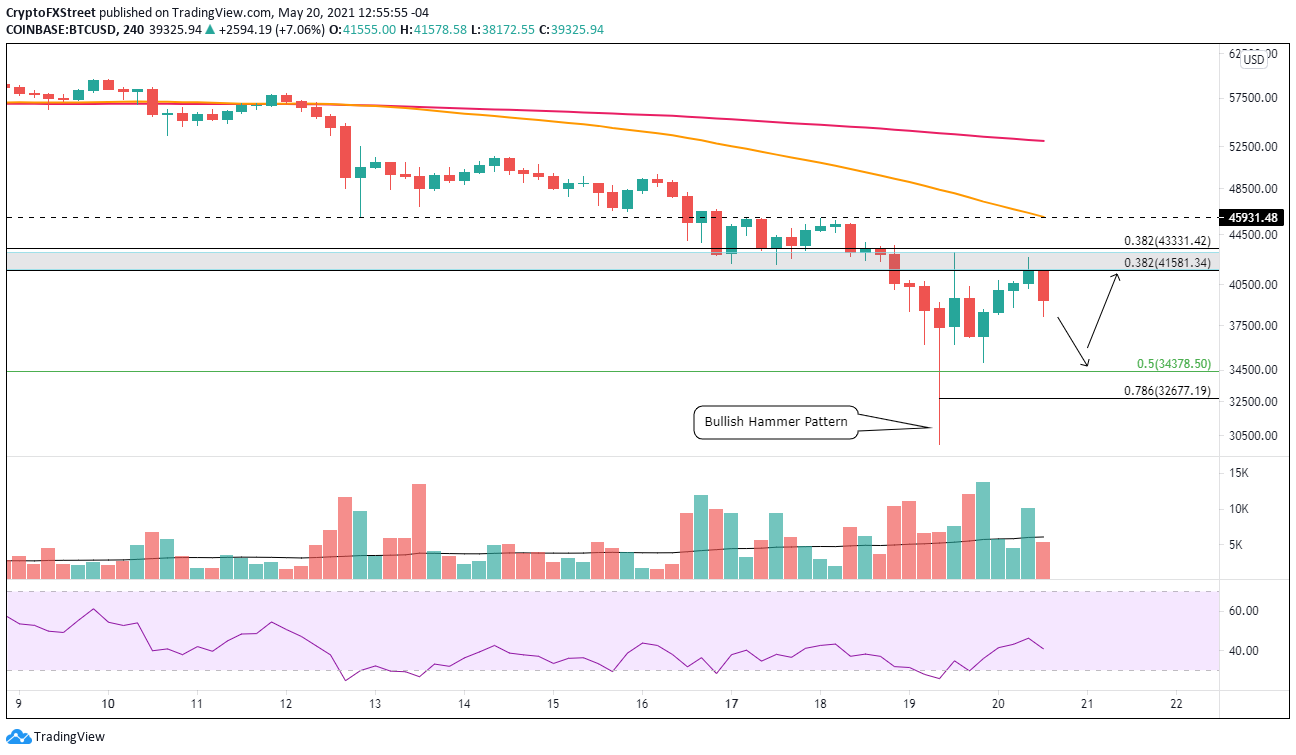 Bitcoin price rebounds, retaking the strategically important 200-day simple moving average (SMA). BTC is now challenging former support around the 38.2% Fibonacci retracement of the rally beginning March 2020. Bullish hammer candlestick on 4-hour chart provided tactical trading opportunity. Bitcoin price has rallied over 40% from yesterday's intra-day low to the price at time of writing ($41,728) but remains almost 35% below the all-time high of $64,899 printed on April 14. The substantial rebound has alleviated some of the pain of the past two weeks, but it has not clarified the outlook for the bellwether cryptocurrency moving forward. 5th largest…