Bitcoin is a better asset than gold – Tyler Winklevoss

Tyler Winkleswoss, the co-founder of Gemini exchange, said that Bitcoin is a better asset than gold.

The cryptocurrency industry, however, has seen an enormous increase in volume over the past decade. This shows that we have not yet seen the mass adoption of digital assets due to their novelty. Although launched initially for transactional purposes, Bitcoin has increasingly become a store of value.

Bitcoin correction is likely a dip to buy – Glassnode CTO

Bitcoin has undergone a significant drop in the past few days as legacy markets have been dragged lower. Rafael Schultze-Kraft, the CTO of Glassnode, said that the ongoing correction is likely a dip to buy. According to a chart he shared, the spent output profit ratio (SOPR) is “flirting with the pivotal level of one.” Generally, when SOPR falls below one in bull markets, investors see it as a medium-term buying opportunity.

Analyst Willy Woo noted that the recent drop was not a standard correction by on-chain standards. There were irregularities in the move lower that may soon be ironed out by Bitcoin returning higher.

Last week, Woo noted that Bitcoin is likely to enter an uptrend because of the recent spike in the “BTC changed hands” metric. Spikes in BTC changing hands on-chain often precedes a reversal in price action, he added.

BTC has dropped from $11,085 to $10,265 over the last five days, falling below the symmetrical triangle formation in the process. This Wednesday, the price tumbled down after encountering resistance at the SMA 20 curve. 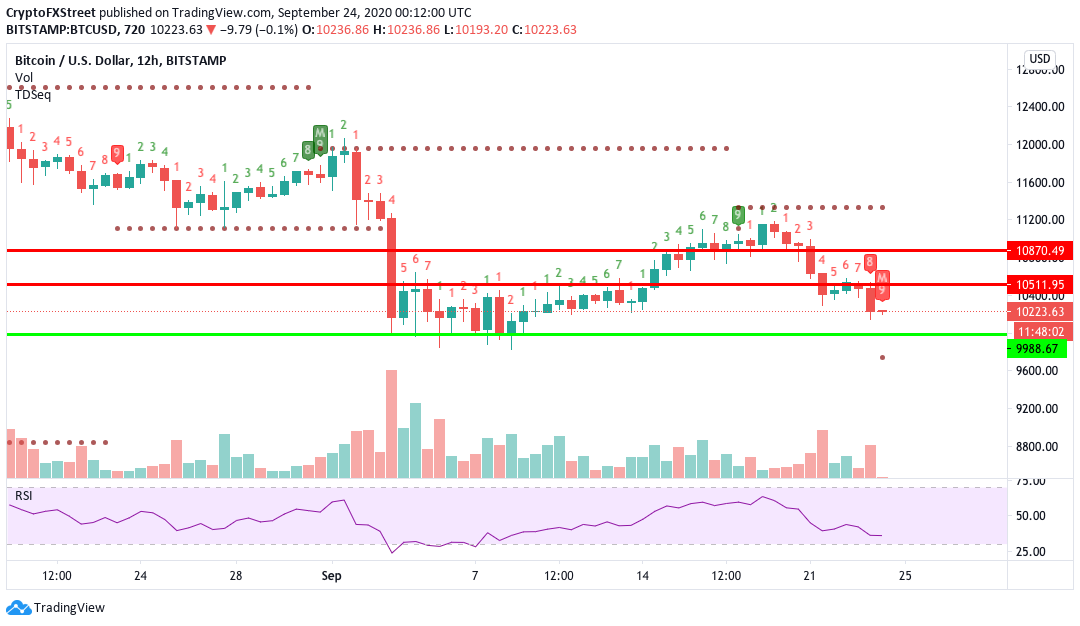 BTC/USD 12-hour chart is flashing a buy signal in the TD sequential. The price has dropped from $11,150 to $10,287 over the last nine sessions. If the buyers make their comeback, they would ideally want to conquer the $10,500 resistance line.

BTC/USD has had a bearish breakout from the consolidation channel. The 4-hour price has broken below the $10,380 and $10,300 support levels in just two sessions. The signal curve was about to cross over the MACD, but the two have since diverged away, showing that the market momentum is still bearish. 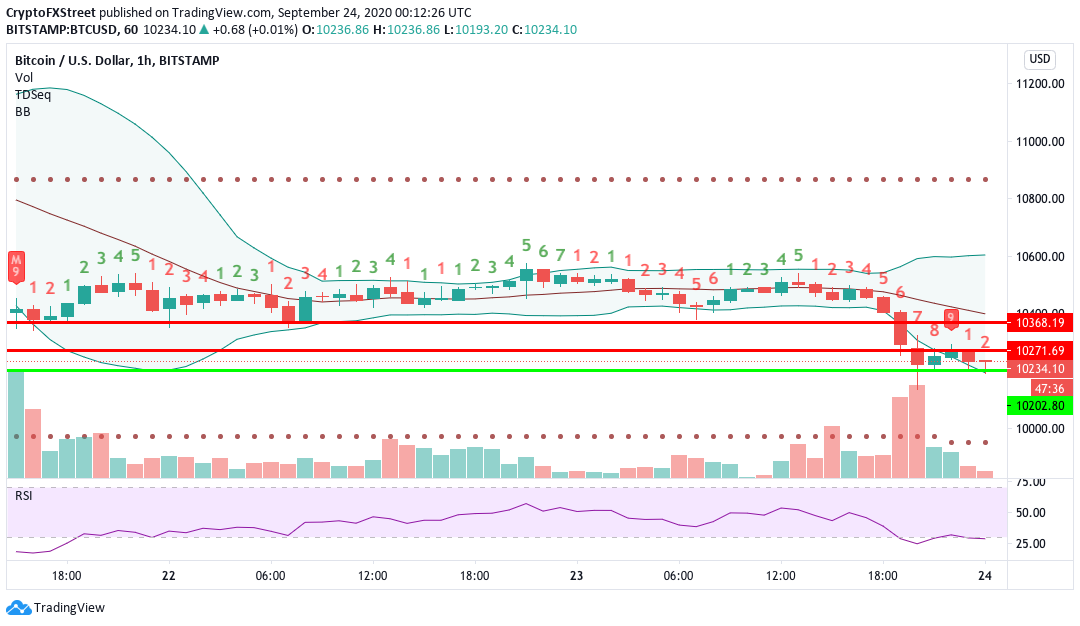 BTC’s hourly chart had flashed a buy signal, but the bears have retained control. Currently, the price is sitting on top of the lower curve of the Bollinger Band. The $10,200 support line must remain strong to prevent further downward movement. The RSI has crept into the oversold zone, which may soon trigger the bulls into taking action. 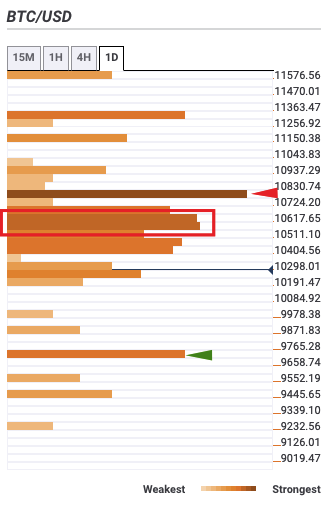 As per the daily confluence detector, the downside is capped off at the $9,700. On the upside, the price faces a robust resistance stack between $10,550-10,650, which has the one-day Previous High and Previous Month low. Above that, there is a stronger resistance level at $10,800.

Data from Santiment reveals that the number of BTC-related mentions across different social media networks has experienced significant spikes in the early hours of Thursday. The social volume reached 688 and 539 in the two latest spikes. With the recent falling price, this spike in social media mentions can generally be classified as a FUD. This outcome could benefit those betting on the upsides since assets perform best when social perception is poor.

After reaching a low of 806.84k on September 20th, Bitcoin’s daily active addresses have climbed significantly over the last three days. Nearly 990,000 Bitcoin addresses were active this Wednesday. This is a positive sign, as it shows that the network is healthy and interactive.

Silver Price Analysis: XAG/USD off monthly lows, not out of the woods yet

BTC has flashed a buy signal in the 12-hour chart Gemini exchange co-founder Tyler Winklevoss believes that Bitcoin is better than gold. Bitcoin is a better asset than gold – Tyler Winklevoss  Tyler Winkleswoss, the co-founder of Gemini exchange, said that Bitcoin is a better asset than gold.  Winklevoss's aspects include scarcity, storage, durability, portability, divisibility, counterfeit opportunities, and adoption. Except for adoption (market capitalization), BTC surpasses gold in all metrics.  The cryptocurrency industry, however, has seen an enormous increase in volume over the past decade. This shows that we have not yet seen the mass adoption of digital assets…