Bitcoin made a run for $12,000 this week but hit a barrier at $11,100. Attempts were made to sustain gains above $11,000 but, dwindling buying pressure continued to ail the largest cryptocurrency. BTC retreated under $11,000 and currently holds above short term support at $10,900. 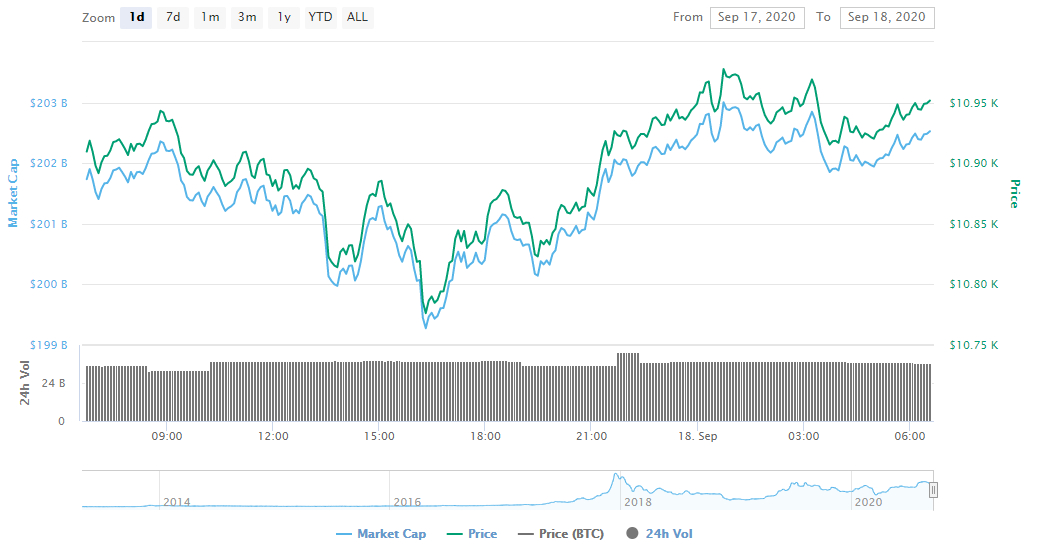 The 4-hour chart highlights the formation of an ascending wedge pattern. A rising wedge illustrates an asset’s bullish momentum over some time. As the trendlines converge, they alert the trader that a breakout reversal is in the offing. Note, the breakouts can either be up or down, but rising wedges tend to signal a reversal from an uptrend.

In this case, the wedge pattern formed in the 4-hour range signals that Bitcoin could plunge to refresh levels towards $10,000 or hold above $10,500 as previouly discussed. However, traders must wait for a confirmed breakout before going all-in on Bitcoin’s potential downtrend. Realize that Bitcoin will seek support at both the 100 Exponential Moving Average (EMA) and 50EMA. Other levels of interest to Bitcoin include $11,800, $11,400 and $11,200 before making the final leg down to $10,000. For now, Bitcoin appears to be settling for consolidation in the range between $10,800 and $11,000. The Relative Strength Index (RSI) is leveling at 64, emphasizing the sideways trend.

Short term analysis using the Bollinger Band appears to confirm the beginning of consolidation, as mentioned earlier. Bitcoin price is settling above the middle layer ($10,890). If the price slides below the middle layer, we can expect Bitcoin to retest the lower band at $10,800. Moreover, the RSI in the short term range also suggests that sideways price action will take precedence in the coming sessions.

According to the IOMAP metric provided by IntoTheBlock, Bitcoin is unlikely to make a drastic move downwards due to the immense support accorded to it in the range between $10,582 and $10,891. Note that previously 1.25 million addresses purchased 768,460 BTC in the area.

The chart above shows that Bitcoin whales are currently taking a hiatus from buying. While there was an increase in BTC held by whales, selling has started because of failure to sustain gains to $12,000. Wallets holding between 1,000 and 10,000 coins decreased from 2,107 on September 15 to 2,099 BTC on September 17.

Subsequently, wallets holding between 10,000 and 100,000 coins have remained unchanged at 104 BTC in the same period. This data shows that whales are doubtful that Bitcoin will complete its bid for $12,000 in the near term. However, they are not worried that Bitcoin can drop to $10,000 because they seem to be selling less.

The daily chart highlights a bullish Moving Average Convergence Divergence (MACD). The indicator is heading towards the positive region amid recovery from the recent dip to -315. Moreover, a bullish divergence above the MACD emphasizes that bulls have the upper hand.

If the MACD crosses above the midline, we can expect Bitcoin to soar through the resistance at $11,000, hence igniting gains towards $12,000. Generally, BTC is in an upward trend above the multi-month trendline from the losses posted in March 2020. Therefore, the delay emanates from the $11,000 seller congestion zone, which, after being broken, would pave the way for the much-awaited liftoff to $12,000.

Coronavirus update: Germany’s new infections jump by 1,916, the most since April

Bitcoin price slides back under $11,000 after hitting a snag at $11,100 mid-week. BTC bulls appear to be settling for consolidation before they can forge the rally to $12,000. Some Bitcoin whales remain doubtful that the price will hit $12,000 soon, which explains the selling pressure. Bitcoin made a run for $12,000 this week but hit a barrier at $11,100. Attempts were made to sustain gains above $11,000 but, dwindling buying pressure continued to ail the largest cryptocurrency. BTC retreated under $11,000 and currently holds above short term support at $10,900.  Bitcoin price movement over 24 hours Bitcoins’ ascending wedge…