Bitcoin SV creator, Craig Wright, seems to be back in the spotlight yet again. But this time around, Wright could end up paying a whopping $17.5 million in fines according to a legal serving from Anderson Kill P. C on behalf of its client, Danny Brewster.

This response is a result of the notice sent by Craig Wright’s law firm, DCA Ontier, to Bitcoin developers regarding the ownership of a few BTC addresses. The letter described the attack on Wright’s computer network around February 5, 2020, which has led to a loss of around 111,000 BTC worth $5.5 billion at the time of writing.

In his notice, Wright included a Mt. Gox address “1FeexV6bAHv8ybZjqQMjJrcCrHGW9sb6uF” aka “1Feex.”  Interestingly, independent security auditor WizSec mentioned that the 1Feex address was a victim of the 2011-2013 Mt. Gox attack, which puts Wright and his notice in a tough spot.

“You and your clients Tulip Trading Limited and Craig Steven Wright, and their agents are hereby placed on notice that our client and many others similarly situated have an equitable interest in the Bitcoins held at 1Feex address in an amount not less than, and likely exceeding $17,500,000.00.”

To further his attempt, Wright allegedly threatened to “bankrupt” and “destroy the lives” of developers from Bitcoin, Bitcoin Cash (BCH), and Bitcoin SV (BSV) camps by suing them.

Bitcoin SV price showed a stark selling pressure since February 18, which has resulted in a collapse from $273 to $170. Since then, BSV seems to have recovered above a crucial barrier at $188. As it stands, the buyers and sellers are fighting to establish dominance.

If the sellers take over Bitcoin SV price, it will spell disaster for the hard-forked cryptocurrency, triggering a correction that could extend well-below the immediate support at $175.

Adding credence to the bearish scenario is the Parabolic SAR indicator which has moved above the Bitcoin SV price. Such behavior suggests that a trend reversal is still underway. 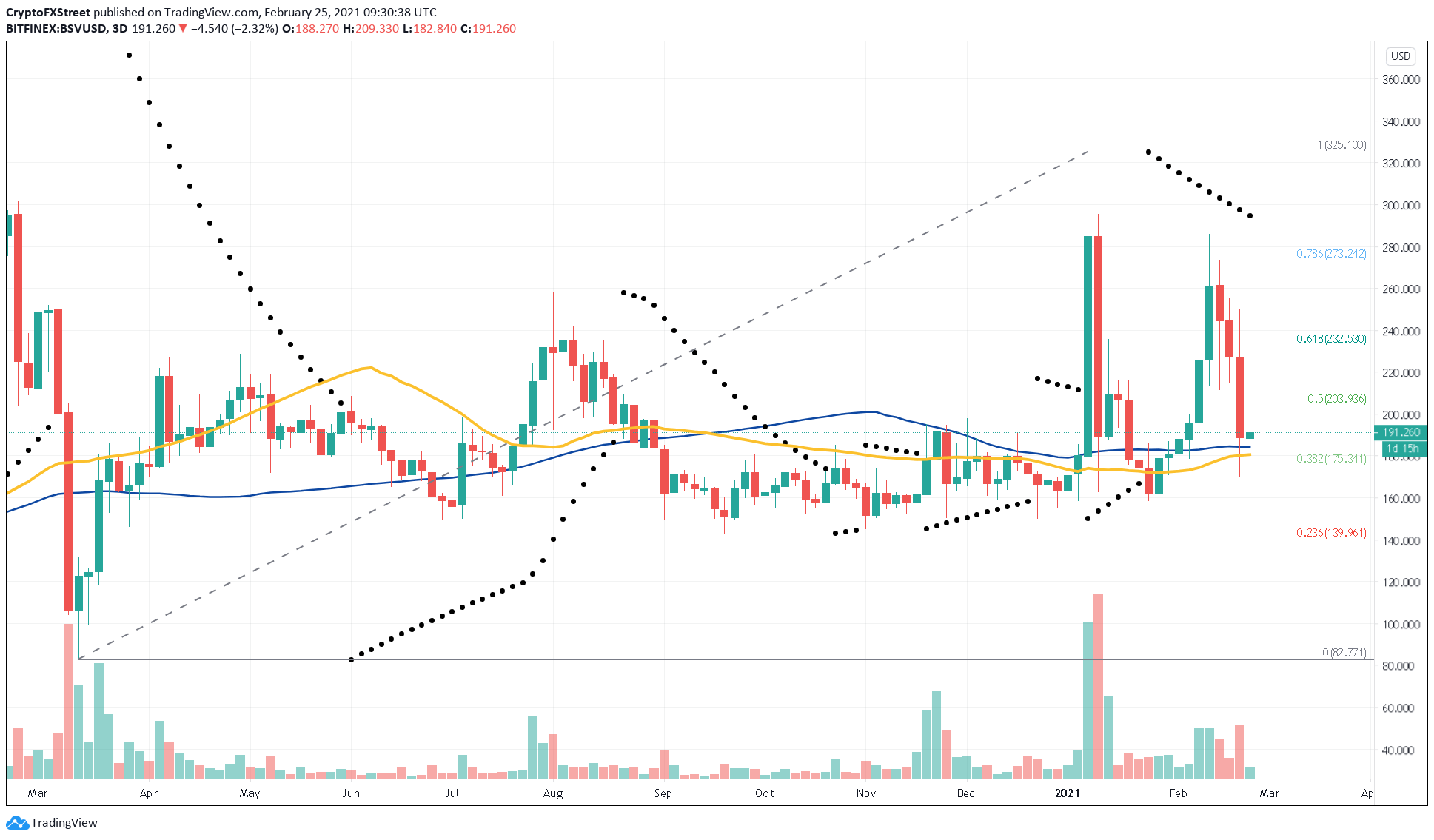 Investors should note that the $188 price level is critical in defending the sell-off. This demand barrier is a confluence of buyers and the 50 and 100 three-day moving averages (MA).

Based on IntoTheBlock’s In/Out of the Money Around the Price (IOMAP) model, nearly 175,000 addresses hold about 1.31 million BSV here. So, if Bitcoin SV price slices through this support level, others demand walls will quickly collapse.

In such a case, Bitcoin SV price will head down to the 38.2% Fibonacci retracement level at $175. A continuation of the selling pressure here could extend the correction by another 20% to 50% to $140 or $82, respectively.

Bitcoin SV price sits on a confluence of support ranging from $188 to $175. Technicals suggest that a continuation of selling pressure could spell disaster for BSV. Adding credence to the bearish case is Craig Wright’s claim to a BTC address that has backfired. If BSV slices through the initial support, it could trigger a 20% to 50% sell-off. Bitcoin SV price has seen massive spikes in buying pressure followed by equally extreme selling pressure. Now, BSV stands at a make-or-break point as the main figure behind the project faces another legal battle.  Craig Wright’s unending legal battles Bitcoin SV…