Bitcoin transaction fees have reached an all-time high amid a massive hash rate decline on the network.

The latest surge in Bitcoin transaction fees come in at a time when the Bitcoin network witnessed a major drop in hash rate. Over the weekend, amid the Bitcoin price plunge, BTC saw the largest daily drop in the network’s hash rate since late 2017.

The massive decline in Bitcoin’s hash rate could be attributed to power outages in China’s major BTC mining farms in Xinjiang. According to Dovey Wan, founding partner at Primitive Crypto, the Xinjiang and Sichuan provinces in China collectively have over 50% of the overall Bitcoin hashrate.

When a large proportion of the hash rate shuts off, blocks that are mined on the network slow down as a result. Few transactions can be confirmed on the blockchain, leaving Bitcoin’s mempool – where all valid transactions wait to be confirmed – are filled with pending transactions.

Miners select the highest-paying fees attached to the transaction and decide to include them in the block that they mine, giving them a direct economic incentive. With the sluggish hash rate witnessed over the weekend, total miner revenue has also reached an all-time high. 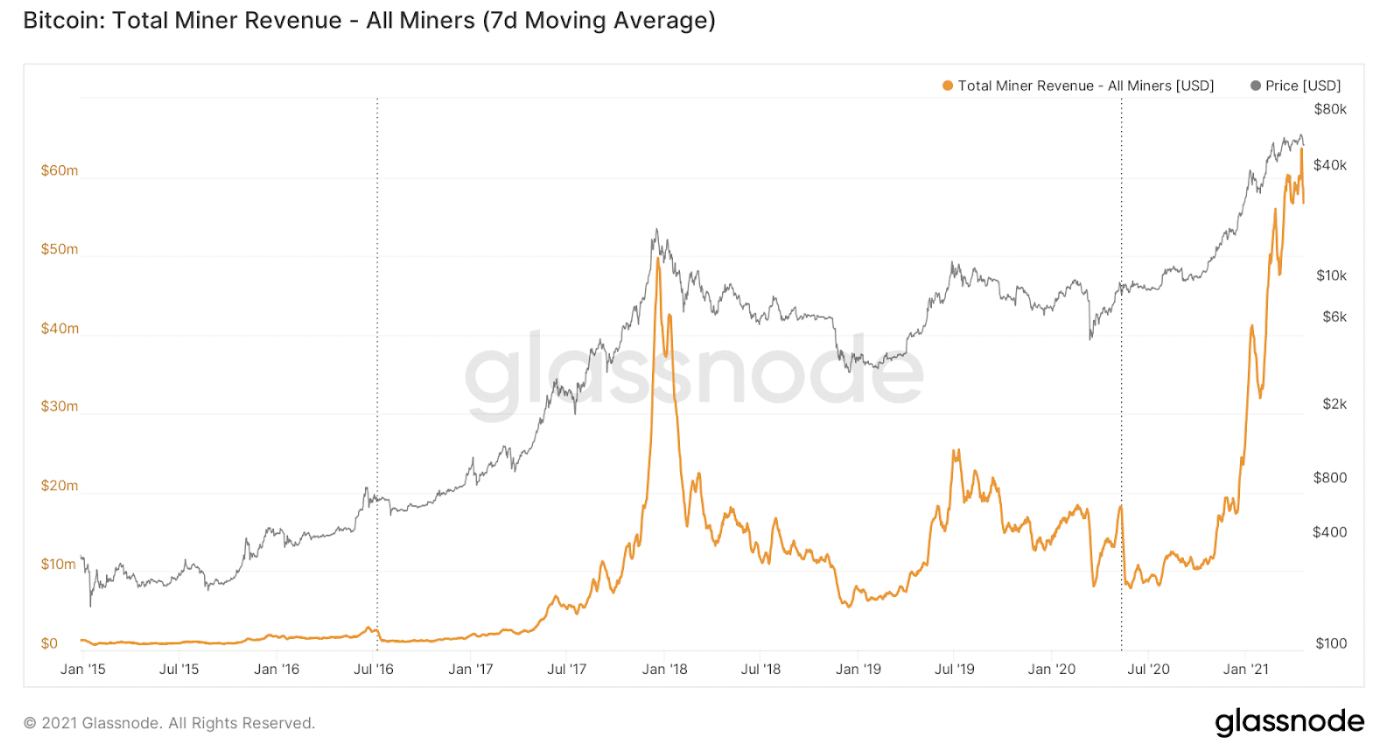 More miners would be incentivized to participate and join in the network, increasing the hash rate in the future, enhancing network security.

Despite the number of miners joining or leaving the network, mining difficulty would be adjusted either upwards or downwards, proportional to the rate of blocks mined compared to the average 10-minute target after a 2,016 block period.

Bitcoin’s mining difficulty is expected to be adjusted in early May according to the current rate. To correct for the drop in hash rate, Bitcoin is due for a 30% adjustment. However, Bitcoin can only adjust its difficulty by 25%, implying more than one downward adjustment ahead.

The average transaction cost of sending Bitcoin has reached nearly $60, according to BitInfoCharts data.

Despite the Bitcoin price decline over the weekend, new addresses and daily active addresses have seen an uptick during the same time.

High fees on the network could lead to more development of the Lightning Network – a scaling solution that acts as a second-layer solution for Bitcoin. The solution could potentially speed up transactions compared to the cryptocurrency’s main network. However, the majority of crypto exchanges currently do not support the solution. Despite the network’s initial intent of being a new payment gateway, Bitcoin continues to own the narrative of a store of value.