Bitcoin Weekly Forecast: BTC bulls wrestled out control over the market and hit the pause button

Bitcoin (BTC) partially regained the losses of the previous week to trade at $9,150 at the time of writing. The first digital coin bottomed at $8,400 on Monday and resumed the recovery in the middle of the week. BTC/USD has gained over 5% in recent seven days, though it is still well below the highest level of 2020 reached at $10,485 on February 12. Bitcoin’s market dominance has settled at 63.5% as some altcoins demonstrated a stronger recovery than the first digital coin.

This week has been packed by various regulatory developments in different corners of the world, from India to South Korea and the United Kingdom.

Thus the Financial Conduct Authority (FCA) of the UK started paying attention to cryptocurrency companies that operate on the territory of the country without authorization. At first, the financial watchdog published a warning about the US-based cryptocurrency exchange Kraken. However, later the regulator took down the warning as it contained some factual mistakes including wrong contact numbers and email addresses. Now the site if the regulator contains the warning about BitMEX, one of the largest cryptocurrency derivatives exchanges.

This firm is not authorized by us and is targeting people in the UK. Based upon information we hold, we believe it is carrying on regulated activities which require authorization.

This is a standard wording used by FCA in relation to unauthorized entities that offer financial services on the territory of the UK. The regulator says that the firms that act without authorization are often scammers. though this warning can hardly scare BitMEX users in the UK.

Anyway, this trend emphasizes FCA’s growing scrutiny towards the cryptocurrency industry. Notably, the outgoing head of FCA, Andrey Bailey, is known for his critical approach to digital assets. Speaking recently to lawmakers in parliament, he said that traders who bought bitcoin should be ready to lose their money as the digital coin had no intrinsic value. Bailey will replace Mark Carney as the head of the Bank of England.

In a separate development, South Korea adopted the amendment to the Act on Reporting and Use of Specific Financial Information. Once approved by the president, the bill will legalize cryptocurrency trading in the country that is considered one of the biggest and most active markets for digital assets. All crypto-related business and trading platforms will have to ensure compliance with strict regulatory requirements to anti-money laundering procedures

On a weekly chart, BTC/USD recovered above SMA50, which is a positive signal, which means that in the long-run Bitcoin is still on the recovery track. However, we will need to see a sustainable move above $9,250-$9,300 area for the upside movement to gain momentum. This resistance area includes several technical barriers like DMA50 and 38.2% Fibo retracement for the downside move from July 2019 to December 2019. Once it is out of the way, the upside is likely to gain traction with the next focus on $10,000. This psychological level coincides with the highest level of the previous week and 50% Fibo retracement for the above-said move.

Both daily and weekly RSIs stay in a neutral zone, which means that the coin may be vulnerable to range-bound trading in a wide channel limited by $9,300 on the upside and $8,700 on the downside.

The  Forecast Poll of experts has improved slightly since the previous week. The expectations on all timeframes turned bullish, which may signal that the market sentiments have improved. Though the percentage of investors with positive long-term sentiments stayed below 70%. The average price forecast on all timeframes except weekly stayed above 9,000. 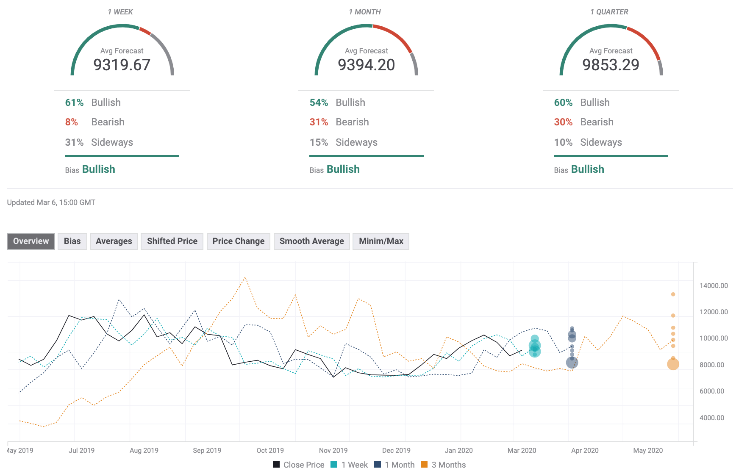 Bitcoin (BTC) managed to recover above critical resistance amid positive fundamental developments. The further recovery may be limited as RSI implies range-bound trading ahead. Bitcoin (BTC) partially regained the losses of the previous week to trade at $9,150 at the time of writing. The first digital coin bottomed at $8,400 on Monday and resumed the recovery in the middle of the week. BTC/USD has gained over 5% in recent seven days, though it is still well below the highest level of 2020 reached at $10,485 on February 12. Bitcoin's market dominance has settled at 63.5% as some altcoins demonstrated a…