Bitcoin price action this week does not match the frantic headlines in the leading financial publications. Price did not close with excessive daily losses this week, and the weekly close is similarly muted compared to historical precedent.

Bitcoin price volatility attributable to a wave of bearish commentary

It was a mixed week for BTC bulls as Federal Reserve Chairman Jerome Powell began the week stating that cryptocurrencies were not a means of payment but an instrument for financial speculation and “a substitute for gold rather than for the dollar.”

Ray Dailio, founder of the world’s largest hedge fund, Bridgewater Associates, warned that BTC could be banned in the United States if it becomes too successful. He paralleled it to the 1934 Gold Reserve Act, which made it illegal for investors to own gold because the government did not want gold to compete with money and credit as a store of wealth.

India continued to debate a national ban on BTC and other digital assets, leading some experts like HashCash CEO Raj Chowdry to say the ban would have grave implications for the future of the economy and result in currency devaluation “of the worst form.”

The Nigerian Central Bank clarified earlier comments and measures introduced in February that ordered all commercial banks to close all accounts associated with cryptocurrency exchanges and businesses directly involved in transacting in digital currencies. The deputy governor told the media that the measures introduced did not prevent residents from cryptocurrency trades.

In contrast, it was revealed that Singapore’s state-owned fund Temasek, with over $300 billion in assets under management, has been buying BTC directly from miners for some time. A clear signal to the investment world that it identifies pioneer cryptocurrency as a store of value.

To end the week, Dawn Fitzpatrick, the CIO of Soros Fund Management, appeared in an interview confirming the fund’s interest and investments in Bitcoin’s infrastructure while hinting it was a BTC owner.

As Bitcoin continues to build on its momentum with individual investors, corporations, and leading investment leaders, it is simultaneously being questioned or even banned by governmental authorities. There is no doubt there is an ongoing tug-of-war that is far from reconciliation, but adoption is accelerating. The changing mood about BTC being a store of value presents a big challenge for national authorities moving forward.

Bitcoin price trend is not broken

From a macro perspective, the week’s price volatility did nothing to derail the bull market that has yielded six consecutive months of positive closes. The daily losses and even the weekly loss do not overwhelm the charts with bearish connotations. All critical long-term moving averages and trendlines remain intact.

Yes, according to Google search data, Bitcoin popularity has dropped 45% over the last five weeks, but it is only natural after the hysteria earlier this year.

What is important is that Bitcoin at the most recent high almost tagged the 3.618 Fibonacci extension of the 2017-2018 bear market at $63,774. Simultaneously, the Relative Strength Index (RSI) continued to show a bearish momentum divergence with price that began at the February high, as the current monthly RSI reading is over 90.

The confluence of bearish technical indicators supported a correction and even still supports further downside in the short-term, but at this point, there is nothing that confirms a trend change.

If BTC does weaken further, it needs to hold the 10-week (SMA), a standard support level for any bull market correction. It would be a 20% decline from the high, and from the price at the time of writing, it would be a further decline of just over 10%. This is right in line with a normal correction.

A weekly close below the 10-week SMA will raise the caution level and, more importantly, hint at further losses. Critical support emerges at the 0.382 Fibonacci retracement level of the entire rally from the 2020 low at $39,659. It coincides with resistance that appeared in January. 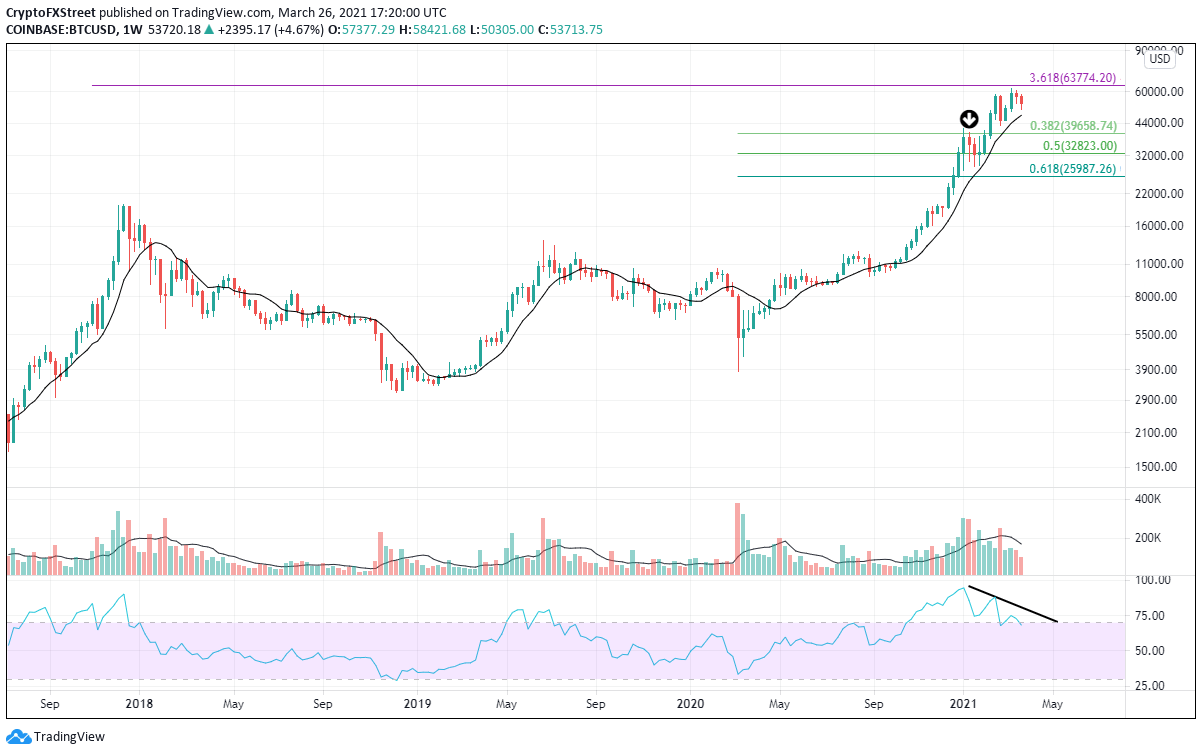 Bitcoin needs to shake off the overbought condition and build a constructive base before targeting notably higher price levels. Corrections are healthy, and the main risk level is precise, so traders need some patience to allow the process to complete.

Bitcoin price will close March in positive territory for the 6th consecutive month. 10-week simple moving average (SMA) to contain any further downside.   A correction was due after hitting the 3.618 Fibonacci extension level. Bitcoin price action this week does not match the frantic headlines in the leading financial publications. Price did not close with excessive daily losses this week, and the weekly close is similarly muted compared to historical precedent. Bitcoin price volatility attributable to a wave of bearish commentary It was a mixed week for BTC bulls as Federal Reserve Chairman Jerome Powell began the week stating…