Home » Bitcoin Weekly Forecast: BTC teetering on the verge of an abyss after conquering a new all-time high

Bitcoin Weekly Forecast: BTC teetering on the verge of an abyss after conquering a new all-time high

Bitcoin lived through a momentous week. The pioneer digital currency hit the new all-time high at $19,915 and stopped within a whisker of a crucial $20,000. A sustainable break above this psychologically significant level will push the price into uncharted territory and potentially trigger a massive bull run. That’s when we start singing our “to the moon” songs.

At the time of writing, BTC is changing hands at $19,000, having gained over 15% on a week-to-week basis. Bitcoin’s market capitalization exceeded $353 billion, while its market share increased to 62.4%.

November has proven to be one of the most successful months in Bitcoin’s history. The coin’s price increased by nearly 50% and posted a seven-week streak of bullish weekly closings.

Bitcoin’s move to the new all-time high was followed by massive profit-taking triggered a cascading leveraged positions liquidation, which is a natural thing on the cryptocurrency market. According to ByBit, over 81,000 traders were kicked out from the market, with the positions worth over 30,000 BTC were liquidated in a matter of hours. The largest single liquidation took place on Huobi, where a trader lost about $6 million.

Notably, the same happened during the Thanksgiving rally, when Bitcoin’s 11%- sell-off was fueled by collapsing longs on marginal exchanges. At that time, nearly $2 billion were wiped away within a few hours after the correction had started.

From the fundamental point of view, the week was quite eventful, with institutional investors showing confidence in BTC growth and pumping the price.

Thus, the head of PayPal, Dan Shulman said that cryptocurrencies could become mainstream and eventually become an everyday payments tool. He believes that the COVID-19 pandemic sped up the digitalization and cryptocurrency adoption process.

I think that if you can create a financial system, a new and modern technology that is faster, that is less expensive, more efficient, that’s good for bringing more people into the system, for inclusion, to help drive down costs, to help drive financial health for so many people… So, over the long run, I’m very bullish on digital currencies of all kinds, he said in the recent interview with CNN.

Also, Laurence Fink, CEO of investment management firm BlackRock, recently stated that Bitcoin is gaining a lot of legitimacy as an asset class. More regulatory clarity and transparency attracted institutional investors that otherwise preferred to stay away from a new lucrative financial instrument.

Moreover, Bitcoin is now regarded as a more attractive investment and a store of value than gold. Considering the seismic shifts in the market sentiments, the digital coin may soon outshine its physical counterpart. Read more details about why Bitcoin has been gaining popularity gaining traditional gold bugs.

Meanwhile, the US regulators focused on stablecoins that they consider risky for the financial system. As FXStreet recently reported, Congressmen proposed to outlaw the issuance of stablecoins by private companies or individuals. They suggest that the issuers of digital coins pegged to the US dollar should obtain permission from the Federal Reserve Bank, the Federal Deposit Insurance Corporation (FDIC), and other relevant banking bodies. Notably, Chinese regulators are also considering a blanket ban on privately issued coins backed by yuan.

Despite the strong bullish momentum seen this week, Bitcoin is in a vulnerable position now. At least three technical indicators are flashing red, while short-term investors are cautious after the recent rejection from $19,900.

The TD Sequential indicator flashed a sell signal, in the form of a red nine candlestick, on the monthly chart, meaning that the price may start a downside correction from one to four candlesticks. Moreover, the price has reached an upper boundary of an ascending triangle pattern with the potential to reverse to its lower border at $13,000 before another growth attempt.

This bearish target coincides with the previous estimates of 20-30% correction from the current overstretched bullish momentum. As FXStreet previously reported, Bitcoin’s bull trends are often interrupted by major setbacks before a new price peak.

Meanwhile, on-chain data implies that BTC faces stiff resistance above the current price. The  IntoTheBlock’s “In/Out of the Money Around Price” (IOMAP) model shows that nearly 300,000 addresses previously purchased over 138,000 BTC between the current price and $19,100. Even stronger barrier cones on approach to $19,300. A sustainable move above this area will invalidate the bearish scenario and bring the bullish trend back on track.

Bitcoin In/Out of the Money Around Price

On the other hand, the downside is even more cluttered with support areas. A wall of potential buy orders goes all the way down to $16,100. In aggregate, over 2.5 million addresses with about 1.5 million BTC may absorb the selling pressure and push the price back up. 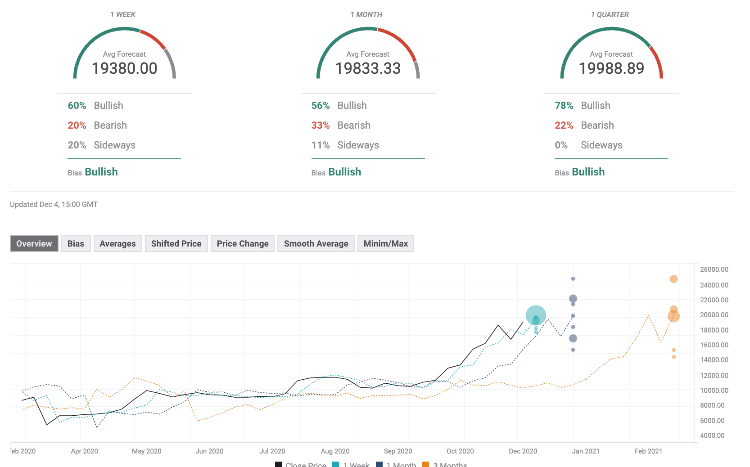 Bitcoin Forecast Poll of experts improved significantly from the previous week as the expectations on all timeframes turned bullish. Notably, the price predictions imply that the participants bet on Bitcoin’s consolidation above $19,000; however, they do not foresee a breakthrough above $20,000 within the nearest three months.

Bitcoin's price hit a new record high this week. A downside correction started on approach to $20,000. The sell-off may be extended as BTC remains overbought. The fundamental picture implies that Bitcoin has strong long-term potential. Bitcoin lived through a momentous week. The pioneer digital currency hit the new all-time high at $19,915 and stopped within a whisker of a crucial $20,000. A sustainable break above this psychologically significant level will push the price into uncharted territory and potentially trigger a massive bull run. That's when we start singing our "to the moon" songs. At the time of writing, BTC is…