Bitcoin price tried recovering from last week’s severe drop on May 12, but things took a u-turn as the cryptocurrency market fell off the rails, repeating the disaster last seen in March 2020. As BTC finds its footing, several on-chain developments suggest a consolidation could follow a swift upswing, while others indicate another sell-off.

From flash crashes to costly mistakes

Bitcoin price depreciated from $58,021 on May 12 to $30,066 by May 19, a 48.2% nosedive that triggered a widespread panic that still grips the crypto populace. While some investors are trying to make sense of this volatility, others are accumulating BTC.

Perhaps one of the main attractions before and after this drop is Elon Musk, the CEO of Tesla. Elon Musk’s tweet triggered a crash on May 12. Likewise, on May 16 Musk startled Bitcoin enthusiasts when he replied to a user and created confusion about Tesla having sold its BTC holdings.

Although the CEO clarified the confusion in a later tweet, Bitcoin price had already suffered the consequence. During the panic-induced market crash, Musk alleviated the panic as he tweeted,

Despite the brutal plummet, the pioneer cryptocurrency rose roughly 43% to set up a temporary swing high at $43,000.

Regardless of the current market conditions, US President Biden proposes to strengthen tax compliance for cryptocurrencies by requiring the investors to report transactions worth $10,000 or more to the Internal Revenue Service (IRS), according to recent reports.

The IRS stated in Thursday’s release,

As with cash transactions, businesses that receive cryptoassets with a fair-market value of more than $10,000 would also be reported on.

Reports of Biden increasing capital gains tax by 50% in late April stirred the market and sidelined Bitcoin price below $50,000. But with the recent sell-off, BTC seems to be unfazed so far.

However, if the Bitcoin hash rate, which has plummeted roughly 20% over the past week, continues to drop, things might get messy with BTC price as it did in mid-April during the Xinjiang blackout, which coincided with a 17% decline in Bitcoin price in under 48 hours.

While this crash, like always, has split the community into pieces, BlockFi, a popular crypto lender, mistakenly sent BTC to its users as rewards instead of dollars.

One user reportedly received 701 BTC, worth nearly 35 million, on May 14. While some users withdrew the tokens, others are returning the funds.

While most new entrants panicked, institutions and hedge funds took this opportunity to accumulate the flagship cryptocurrency. Interestingly, MicroStrategy announced the acquisition of 229 BTC for approximately $10 million on May 18, a day before the 31% nosedive.

Bitcoin price shed roughly $28,000 and tagged $30,066 on Wednesday, causing around 5.49 billion worth of long and nearly $1 billion short positions to face the ax. 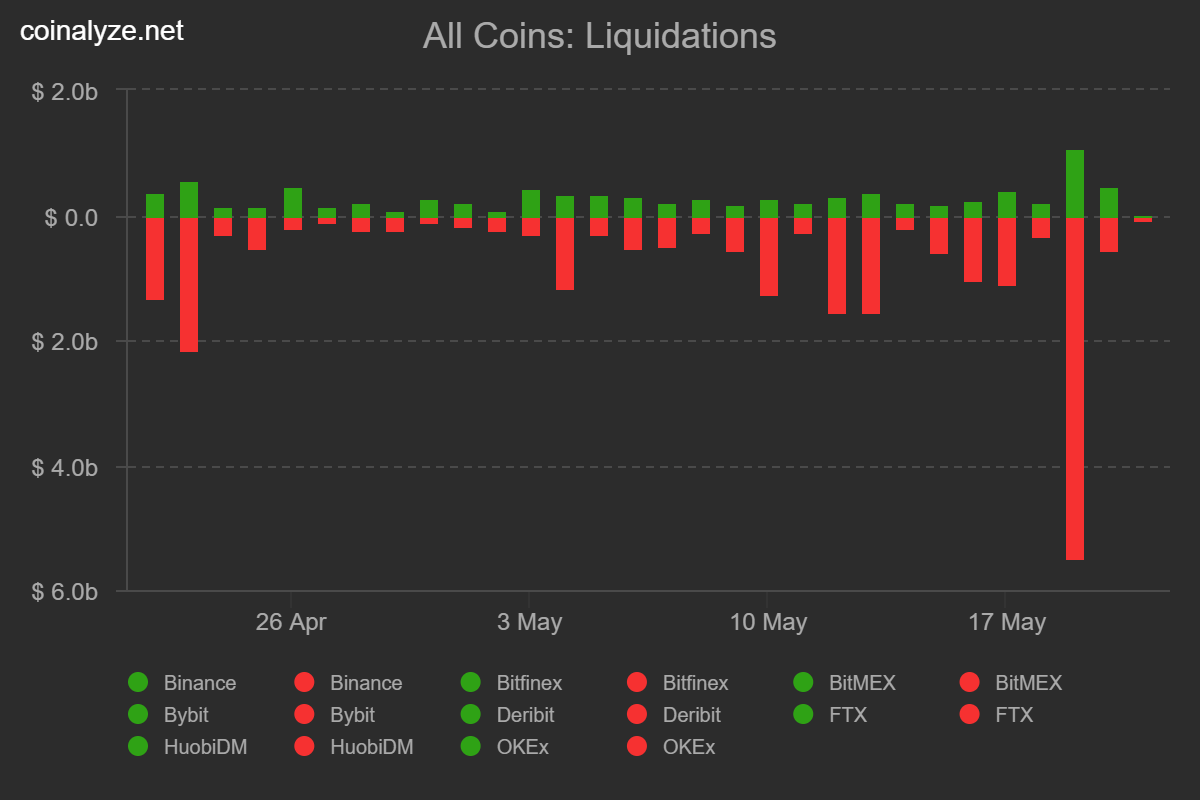 Although this crash was not as severe as March 2020’s black swan event (51.7% drop between March 12 and March 13), the panicking retail and overleveraged traders helped cascade the tailspin. 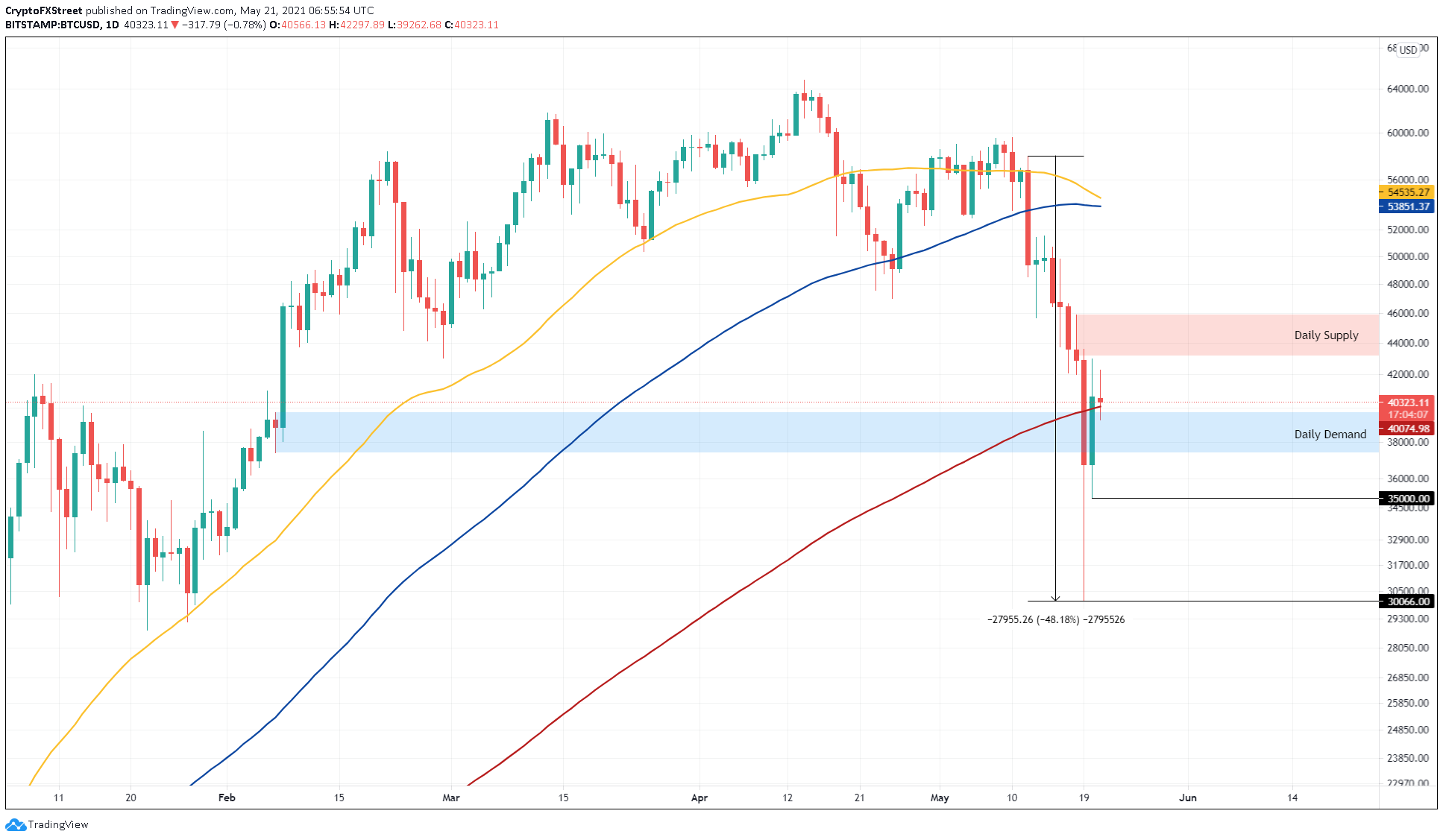 Adding credence to this bullish outlook are two major BTC outflows of 165,300 and 107,600 BTC on May 19 and May 20, respectively. This metric reveals that high-net-worth individuals or institutions took advantage of the flash crash and are moving their purchases off exchanges, suggesting that they are optimistic about Bitcoin price performance.

Providing a tailwind to the rise in Bitcoin price is the 365-day MVRV model, which tracks the profit/loss of investors that purchased BTC over the past year. This fundamental index dipped from 53.8% to 0%, noting that the massive selling pressure from profitable holders has been extinguished.

Another on-chain metric supporting an ascent in Bitcoin price is the Stable Coin Supply ratio (SSR). This metric is the ratio between Bitcoin market capitalization and the aggregated supply of stablecoins.

A lower SSR suggests a potential yet higher buying capacity/power. At the time of writing, SSR displayed bullishness as it dipped to 13.21, a six-month low, suggesting that the stablecoin supply is far higher than the Bitcoin market capitalization.

Indeed most of the on-chain metrics are indicating that a surge in Bitcoin price seems likely. However, this narrative depends on the fact that BTC bounces from the 200-day SMA at $40,0073.

The inability of the buyers might push BTC to venture lower. Mirroring these bearish signs is the BTC exchange reserve, which has been on an ascent. The number of BTC held on centralized entities rose from 2.36 million on April 19 to 2.45 million as of this writing. This 3.8% increase might hint that the sellers are not done yet.

If the buyers fail to rescue the pioneer crypto here, investors could expect a 14% crash to $30,066.

Bitcoin price suffered a fatal crash as it slid from roughly $58,000 on May 12 to $30,000 on May 19. This violent downturn has stacked up $5.49 billion worth of long positions in liquidations. On-chain indicators do not reveal a clear bias for BTC as it consolidates. Bitcoin price tried recovering from last week's severe drop on May 12, but things took a u-turn as the cryptocurrency market fell off the rails, repeating the disaster last seen in March 2020. As BTC finds its footing, several on-chain developments suggest a consolidation could follow a swift upswing, while others indicate another…