This brought an excitement and a sense of bullish frenzy to the market. Bitcoin smashed several resistance levels and touched $9,476, the level, not seen since the end of February. Altcoins also gained ground significantly. Moreover, at some point, it was altcoins, like XRP and ETH that drove the market higher. While all coins retreated from the recent highs, Bitcoin is still trading with 18% of gains since the start of the week. ETH and XRP gained 13% and 12% respectively.

It’s all about halving

The market is agitated ahead of Bitcoin’s halving as many industry experts bet on strong rally following the event that will lead to a block reward reduction. The halving takes place every 210,000 blocks and it usually takes for years to mine them. This time the halving block is expected on May 12, which means we have less than two weeks left. Basically, 99% of blocks before the halving has been already mined, according to the data, published by Bitcoin Block Bot on Twitter.

The proximity of the event increases the uncertainty mixed with a sense of urgency and FOMO (Fear of Missing Out). People are anxious that they won’t be able to join the presumably upcoming strong rally at the most favorable level.

Search volumes for “Bitcoin halving” is on the rise. Google Trends data shows that the number of searches for this term has been growing throughout April, moreover, this search request is even more popular than Bitcoin itself. These statistics reflect the sentiments on the market that has been driving the price of the first digital coin higher the whole week.

The unprecedented QE programs launched by global central banks is another powerful drive behind Bitcoin’s growth. The US FED promised to “do whatever it takes” to support the financial system and the economy infected by the virus, which has proved to be deadly not only for humans but also for the economies.

It remains to be seen If massive liquidity injections and money-printing can bring the desired effect and prevent the large-scale recession. However, the inflationary consequences of the Fed’s policy have long been used by cryptocurrency supporters as a key selling point for Bitcoin, which is deflationary by its nature.

Notably, since March 11, the US central bank launched a QE worth $2 trillion, and it is not the limit yet. The US citizens have already received their stimulus checks, and new financial aid may on the way. Some of them have chosen to spend their “helicopter money: on Bitcoins and other digital assets. Thus, the US-based cryptocurrency exchange registered the increase of new deposits in the amount that coincides with the size of governmental support ( $1,200).

Bitcoin is about to have one of the best weeks since the end of October 2019 and one of the longest periods of weekly gains since the bullish rally of 2017. The coin bottomed at $3,886 on March 13 and has been moving upwards ever since. Bitcoin’s price more than doubled in seven weeks, and traders bet that more to come. However, we will need to see a sustainable move above $9,000 for the upside to gain traction again. The longer BTC hovers below this barrier, the more the risks of sidelined trading with a bearish bias and a re-test $6,000 before the growth is resumed.

The Forecast Poll showed a mixed picture as the expectations stayed weekly and a monthly basis stayed bearish and moved to neutral on a quarterly basis. It means that the market does not believe that the current growth is sustainable. The price expectations on all time-frames are below $9,000, though all forecasts suggests that BTC will stay above $8,000. 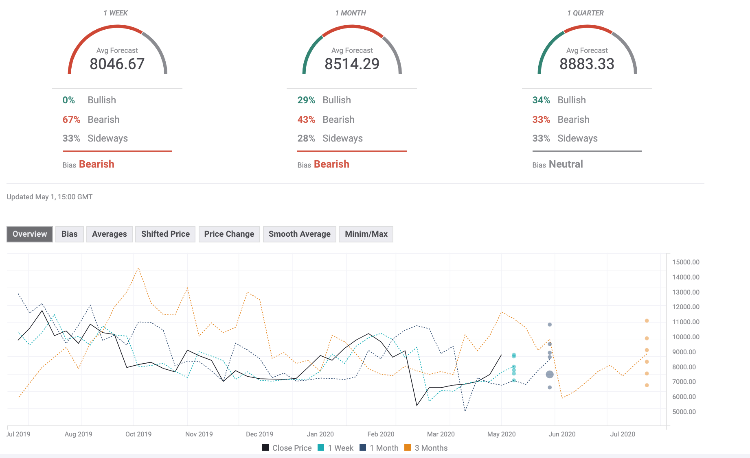 Fed’s Barkin: Downturn likely to last more than a couple of months

Bitcoin has had a stellar week and registered over 18% of gains. Halving expectations and massive QE drive the price higher. BTC/USD needs to regain $9,000 to avoid deeper correction. This brought an excitement and a sense of bullish frenzy to the market. Bitcoin smashed several resistance levels and touched $9,476, the level, not seen since the end of February. Altcoins also gained ground significantly. Moreover, at some point, it was altcoins, like XRP and ETH that drove the market higher. While all coins retreated from the recent highs, Bitcoin is still trading with 18% of gains since the start…