The impressive rally Cardano price has enjoyed comes after a significant update to its blockchain. The Goguen ‘Mary’ update allows users to create custom on-chain tokens that are ‘native’ to the network, making ADA a multi-asset blockchain.

The so-called “Ethereum killer” has been on fire throughout 2020. Cardano price first saw a 600% increase in its market value between March and July 2020. Then the token rose by another 130% as the year ended.

In 2021 alone, ADA’s market value has increased by a whopping 300%. With the team of engineers at IOHK rolling out more protocol updates, the price is seeing a positive reaction and shows no signs of slowing down.

ADA has seen a 50% increase in its market value in the last three days. On the one-week chart, Cardano price shows the formation of an inverse head and shoulders pattern, suggesting further gains in the horizon.

This technical pattern hints at a 900% target obtained by measuring the distance from the head to neckline.

Cardano price has already seen a 230% increase since it broke out in early January. But it is far from being done as the inverse head and shoulders forecasts it will rise to $2.00. 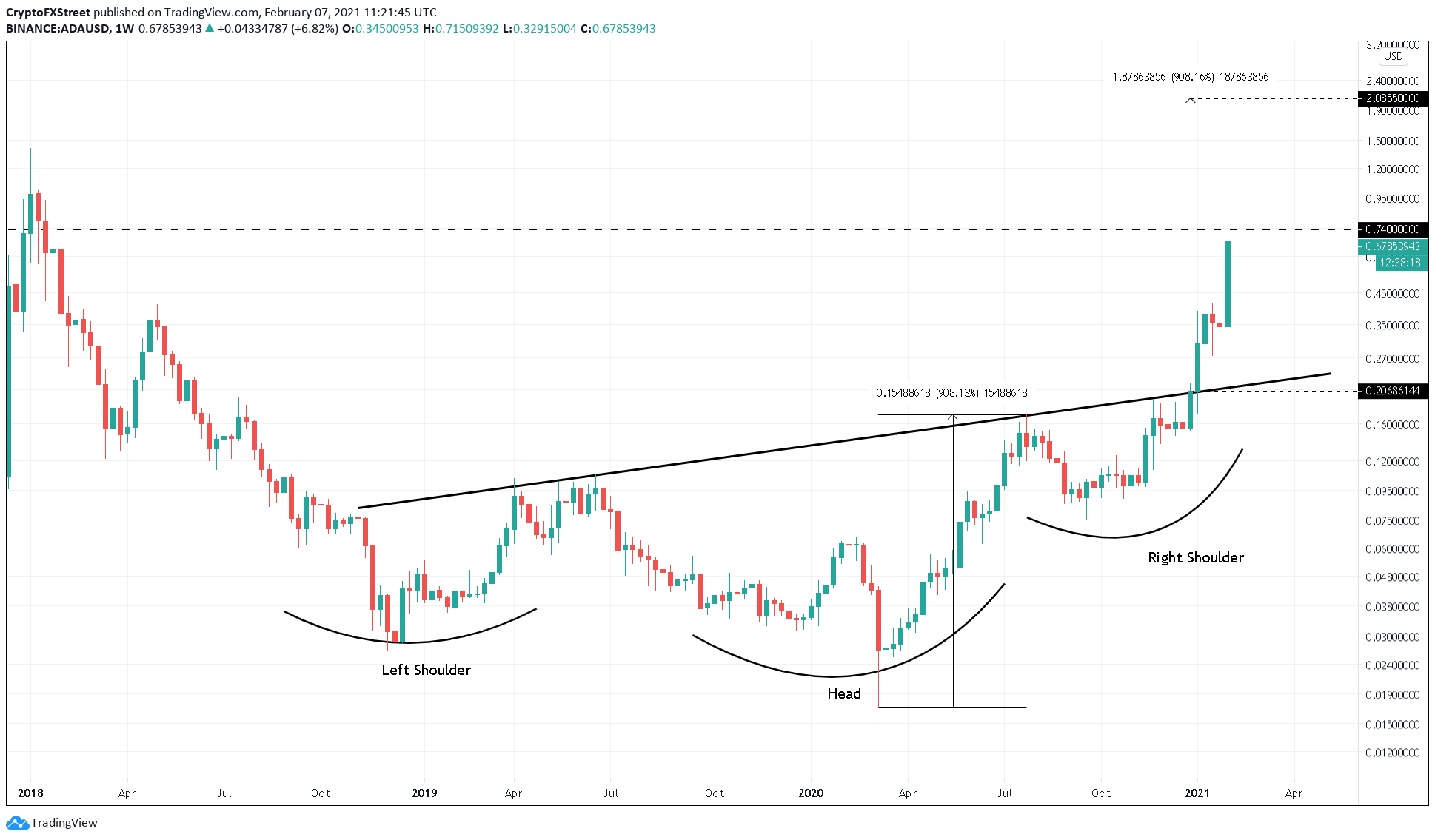 Based on IntoTheBlock’s In/Out of the Money Around Price (IOMAP) model, there is one resistance barrier ahead of Cardano price that may absorb some of the buying pressure seen recently.

At $0.75, roughly 3.85 million ADA were purchased by nearly 800 addresses. Given the important numbers of holders that have been “Out of the Money” around this price level, they may try to break even, putting a stop to Cardano’s uptrend.

Regardless of the significant supply barrier ahead, whales’ activity on the network adds fuel to the optimistic outlook.

The number of large transactions with a value of $100,000 or greater has seen a 424% increase since late January. As more value is transferred within Cardano’s blockchain, higher fees are paid, which tends to affect ADA’s market value positively.

It is worth mentioning that a failure to overcome the $0.75 resistance level could spell disaster for ADA. Indeed, the rejection might result in a downswing pushing it to the next immediate support at $0.60.

Cardano price is up more than 50% in the past three days after rolling out a new network update. ADA’s uptrend shows no sign of stopping, but there is a critical resistance barrier ahead. On-chain data suggest the presence of whales behind the current price action, supporting a further advance. The impressive rally Cardano price has enjoyed comes after a significant update to its blockchain. The Goguen ‘Mary’ update allows users to create custom on-chain tokens that are ‘native’ to the network, making ADA a multi-asset blockchain. The so-called “Ethereum killer” has been on fire throughout 2020. Cardano price first saw…