Cardano price has exceeded the measured move target of the cup-with-handle base constructed from April 15 to May 5. The rally may extend in the short term as key technicals are not highly overbought.

Yesterday, Dallas Mavericks owner, Mark Cuban, struck a Twitter conversation with ADA’s CEO Charles Hoskinson. The conversation began with Cuban asking a person on Twitter if Cardano can be used for anything. A question he said he asks of any cryptocurrency.

Are you, personally,   able to use $ADA for anything? If so, what have you used it for? That’s the question I ask about all Crypto. Do you find yourself using it for anything that you find value in?

Hoskinson later followed up his Twitter messages with a 12-minute video, in which he directly spoke to Cuban and offered further information about ADA and the failings of Ethereum.

Over the last four days, Cardano price has rallied 47%, based on the current price. It is the largest 4-day gain since February 10. The rally was kickstarted by a powerful, bullish engulfing day covering the previous six trading days, and it closed with a 23% gain.

Underpinning the rally is the attention being directed towards ADA’s less intensive mining and transaction network. A huge benefit in light of Elon Musk’s comments earlier in the week about the notable environmental impact of Bitcoin mining.

In an FXStreet article published on May 13, it was projected that Cardano price would extend the breakout from the cup-with-handle base to the measured move target of $2.40, generating a 65% gain from the handle breakout at $1.46. Yesterday, ADA reached the target.

Cardano price momentum is clearly in favor of higher prices. The path higher may be a blowoff move from the current price taking ADA through $3.00 and on to the 261.8% Fibonacci extension of the April decline at $3.93. Alternatively, Cardano price could slide in a mild correction, enabling it to digest recent gains and release the mildly overbought condition on the daily Relative Strength Index (RSI). 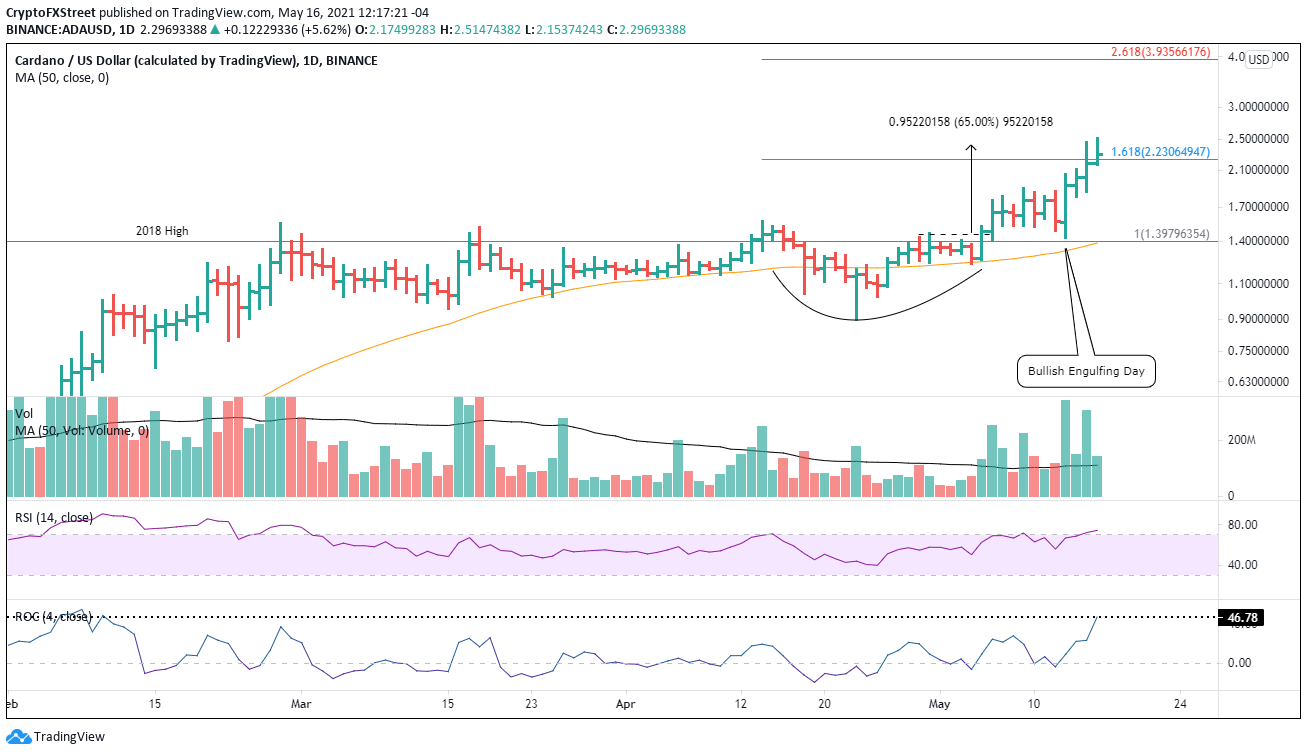 With the cryptocurrency market showing volatility over the last few days, investors need to be prepared for a bearish scenario. A bearish reversal today followed by a decline below $1.89 could signal that ADA is preparing for a deeper correction or that the rally has reached its pinnacle.

AUD/USD remains on the way to 0.7820 hurdle ahead of China data dump

Cardano price leads cryptocurrency leaderboard after bullish engulfing day. ADA currently shows the largest four-day gain since February 10. Mark Cuban offers his support for Cardano but wants to see utility and marketing. Cardano price has exceeded the measured move target of the cup-with-handle base constructed from April 15 to May 5. The rally may extend in the short term as key technicals are not highly overbought. Mark Cuban and ADA's CEO engage in Twitter conversation Yesterday, Dallas Mavericks owner, Mark Cuban, struck a Twitter conversation with ADA's CEO Charles Hoskinson. The conversation began with Cuban asking a person on…