Cardano price continues to increase, showing no sign that it wants to stop. While on-chain metrics turn bullish, ADA seems poised to reach new all-time highs in the near future.

The so-called “Ethereum killer” broke out of a massive head-and-shoulders pattern in late December 2020. Since then, its price has risen by more than 100%, but still has a long way to go.

By measuring the distance between the pattern’s head and neckline, it forecasts that Cardano price is primed to rise another 800%. Therefore, the ongoing uptrend suggests ADA will climb to $2 to meet the head-and-shoulders formation’ target. 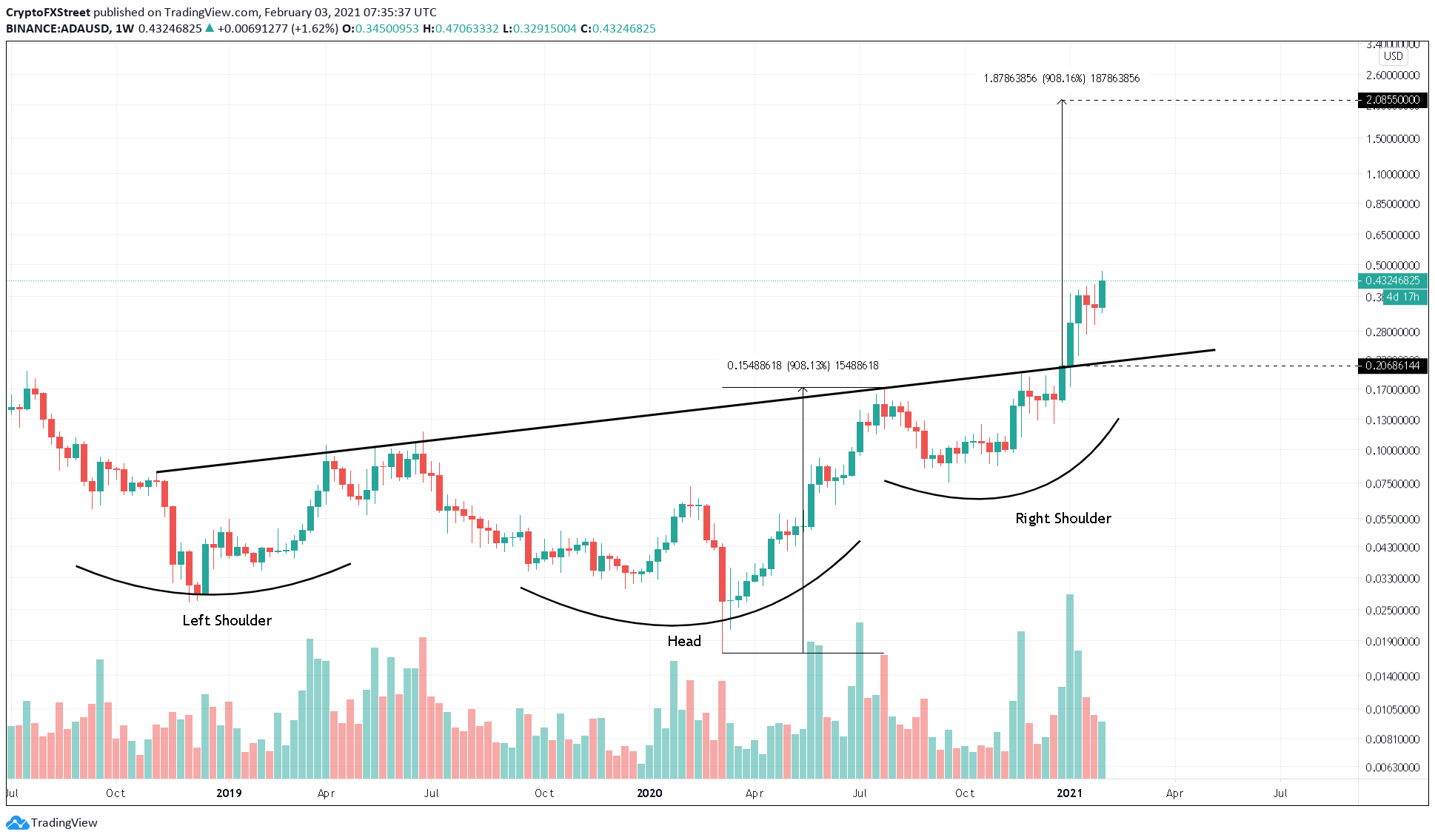 Such market behavior indicates that whales or high-net-worth individuals are once again interacting on ADA’s network, which can be seen as a very positive sign. The last time the number of large transactions grew by 325%, Cardano price rose nearly 76%. Now, similar price action could take place.

IntoTheBlock’s In/Out of the Money Around Price (IOMAP) shows little to no resistance ahead of Cardano that will prevent it from achieving its upside potential. Instead, the IOMAP cohorts show that this altcoin sits on top of stable support at $0.42, where 21,000 addresses purchased 1.65 billion ADA.

This crucial area of demand may serve as a sponge that absorbs any selling pressure and propels Cardano price higher. Indeed, holders within this price range may even buy more tokens if prices were to correct to avoid seeing their investments go “Out of the Money.”

Nonetheless, if for any reason the $0.42 support level is breached, investors should expect a downswing towards the next important interest area at $0.38. Here, 20,000 addresses previously purchased 862 million ADA.

USD/JPY: No signs of a bearish movement ahead in the near-term

Cardano price is back in the green after breaking through a crucial resistance barrier.   ADA’s market value has risen by roughly 25% in less than 72 hours, adding credence to the macro-bullish perspective. On-chain metrics confirm that whales are back in the network, which could help push prices higher. Cardano price continues to increase, showing no sign that it wants to stop. While on-chain metrics turn bullish, ADA seems poised to reach new all-time highs in the near future. Cardano price targets new all-time high of $2 The so-called “Ethereum killer” broke out of a massive head-and-shoulders pattern in…