Home » Cardano Price Prediction: ADA resets before the next leg up to new all-time highs

Cardano Price Prediction: ADA resets before the next leg up to new all-time highs

Cardano price is traversing an ascending triangle pattern formed when multiple higher lows and a series of highs are connected using trend lines.

In this setup, buyers aggressively bid up the ADA price creating higher lows, while a cluster of sellers at $1.48 absorb this momentum which produces swing highs.

A bullish breakout will occur when the sellers lose steam resulting in a surge higher. In Cardano’s case, the 48% upswing is determined by measuring the distance between the first swing high and low and adding it to the breakout point at $1.48.

At the time of writing, the so-called “Ethereum killer” created another swing high as it failed to breach the triangle’s base. Interestingly, the Momentum Reversal Indicator (MRI) flashed a cycle top signal in the form of a red-one candlestick on the 12-hour chart.

This technical formation projects a one-to-four candlestick correction. The retracement will likely end around the MRI’s State Trend Support at $1.34, coinciding with the short-length, 25 Simple Moving Average (SMA).

A breakdown of this wouldn’t necessarily affect the upswing and would find stable grounds for a reversal around the triangle’s hypotenuse at $1.26, which coincides with the long-length 50 SMA. 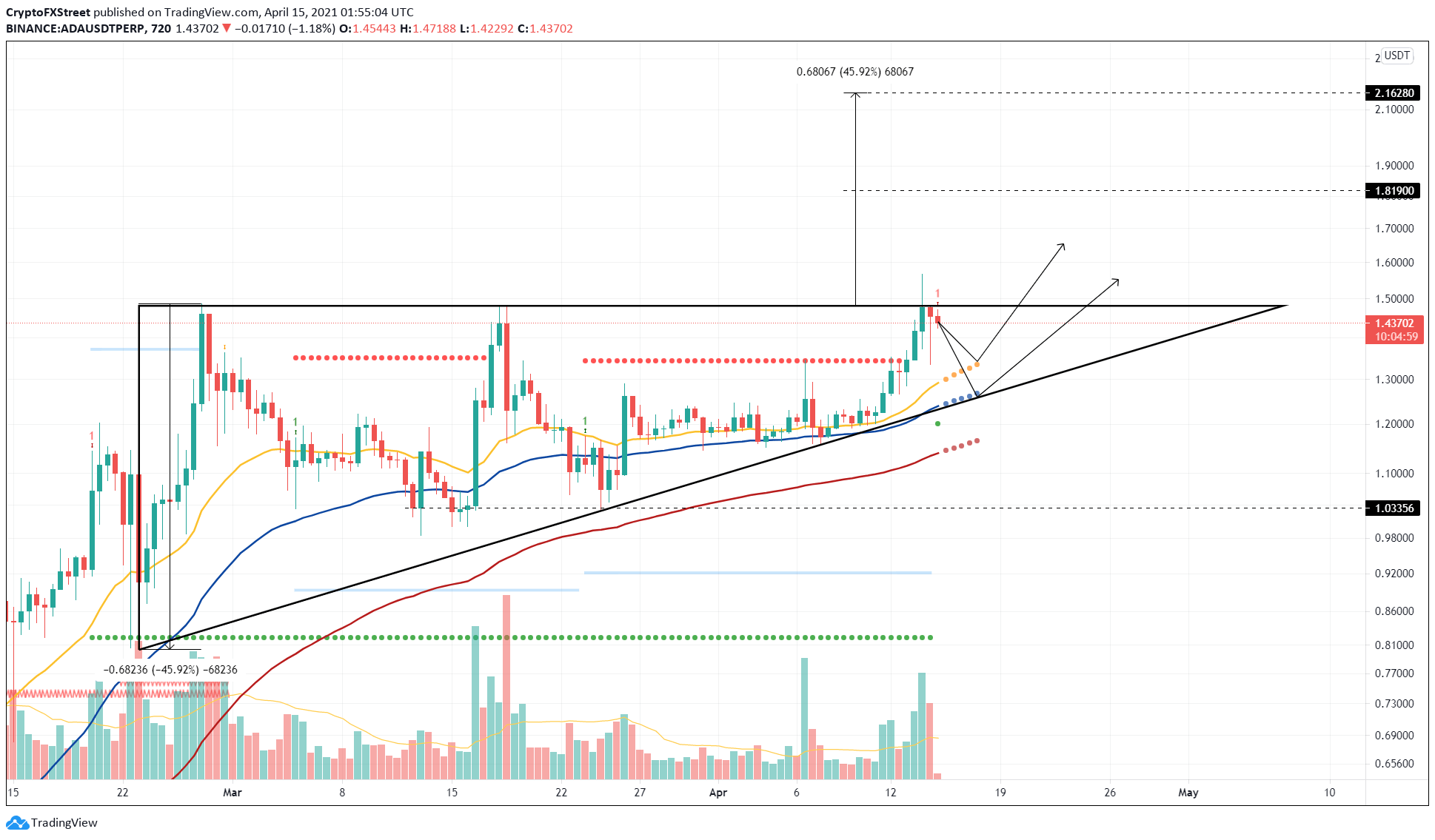 On the flip side, if the sellers’ ask orders dominate, the trend line connecting the swing lows could be breached. In such a scenario, market participants should expect a swift correction to $1.20.

If Cardano price breaches $1.15 and continues to descend, the bullish thesis will face invalidation and result in an 11% correction to $1.03.

Cardano price faced exhaustion of bid orders as it hit the base of an ascending triangle at $1.48. A minor retracement to the immediate demand barrier at $1.34 seems likely. Shattering the resistance level at $1.48 forecasts a new all-time high for ADA. Cardano price awaits an expansion as buyers re-enter an accumulation phase before breaching a crucial overhead barrier.   Cardano price to pullback before catapulting higher Cardano price is traversing an ascending triangle pattern formed when multiple higher lows and a series of highs are connected using trend lines. In this setup, buyers aggressively bid up the ADA…