The Canadian central bank dived deeper into the central bank digital currency issues and tried to access the risk and practical usage aspects of the new form of money.

According to the report published by the regulator, a token-based central bank digital currency would create security
risks to users, while the safety of the state-backed money would be reliant on third parties, such as exchanges and storage solution providers.

Bank of Canada is concerned about risks

The authors of the report elaborated on the “Not your keys, not your crypto” motto, pointing out that it creates legal and logistical barriers for the central bank’s digital currency and makes users vulnerable if they lose their keys.

Considering that a lot of CBDC users will come to crypto without a clear understanding of the concept, many of them would turn to third-party service providers to manage their cryptocurrency keys of store assets.

“The safety of CBDC will also depend on the competition between providers of aggregation solutions and the interaction of individual security protocols chosen by each supplier. Externalities from the competition will be present because suppliers will not internalize the risks to their users that result from their security standards.”

At this point, the issue of liability in case of money loss gets tricky. Since CBDC is supposed to be a state-backed and issued money, the central bank should figure out how to deal with intermediaries to ensure customer protection.

The Bank of Canada started building its CBDC in February. However, the regulator emphasized that it would turn to the new form of money only when companies turned to cryptocurrency to handle payments or reduced cash usage significantly.

Other regulators are cautiously positive

At this point, the vast majority of global central banks and regulators are involved in investigating or creating the prototypes of their digital currencies. The trend is gaining traction as digitalization has already penetrated in all aspects of our everyday life, including finance.

Interest in CBDC is growing 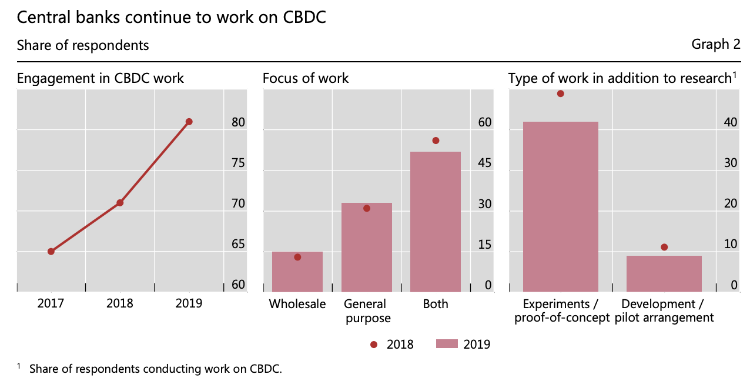 At the end of September, the European Commission presented a comprehensive draft proposal on integrating the new phenomena with the existing reality. The authors of the lengthy document admitted that cryptocurrencies were moving fast towards mass adoption. As such, they need to be regulated to prevent and weed out corrupt practices and abuse in the industry.

Eventually, the Commission’s proposals boiled down to the fact that the industry players should meet specific requirements and adhere to an established set of rules.

This month, the European Central Bank (ECB) announced public consultations on the digital euro and launched experiments with CBDC. However, the regulator emphasized that it would be a cryptocurrency due to the risks related to this type of asset.

The same idea of risks and regulations is translated by the US and UK regulators that are also engaged in investigating CBDC risks and benefits.

The central bank of Estonia recently announced the launch of its long-term research project on digital currencies. Notably, the government has already moved to blockchain named KSI some of its processes. Now The experts will focus on whether this blockchain KSI suits for issuing and operating CBDC.

Also, the FXStreet previously reported that the central bank of Brazil plans to launch its digital currency in 2021.

The community has mixed opinions

James Wallis, the VP Global Sales Strategy & Operations in Ripple, and a founder of 7e4 LLC, recently expressed an opinion that CBDCs are inevitable as a logical path of the evolution of money.

The head of Ripple, Brad Garlinghouse, also repeatedly emphasized that the regulation is a critical ingredient of the successful cryptocurrency industry development.

However, some die-hard Bitcoiners oppose the idea of the state-backed money on the assumption that they kill the concept of privacy and independence from all sorts of authorities.

The Canadian regulator published the report on CBDC. Bank of Canada is moving with the global trend. The industry adapts to the idea of the state-backed digital money. The Canadian central bank dived deeper into the central bank digital currency issues and tried to access the risk and practical usage aspects of the new form of money. According to the report published by the regulator, a token-based central bank digital currency would create security risks to users, while the safety of the state-backed money would be reliant on third parties, such as exchanges and storage solution providers. Bank of Canada…