Chainlink adoption has been on a tear during this recent bull run. Likewise, LINK price explored into the discovery phase as it erected new all-time highs.

Chainlink oracles will get a boost as New Change FX, a data and analytics firm, announced that it would make its regulated benchmarks for traditional markets, precious metals, and others available on leading blockchains via Chainlink Network.

High-quality price data of over 2.300 currency pairs will allow developers to create applications in the rapidly expanding DeFi sector.

The decision to transition to a blockchain data provider on the Chainlink Network should come as no surprise as DeFi markets are quickly expanding in value. Most DeFi products require high-quality financial data, and Chainlink is the industry leading oracle provider to DeFi.

In addition to this significant development, Oddz, a multi-chain options trading platform, revealed the integration of Chainlink’s Implied Volatility data feed for BTC/USD and ETH/USD pairs across multiple blockchains.

We selected Chainlink as our go-to oracle solution because it sources high-quality data using decentralized, time-tested, and hyper-reliable infrastructure that have strong built-in resistances to potential exchange inaccuracies or data manipulation attacks.

With such a rapid rate of adoption, Chainlink has become one of the most popular oracle blockchains to rely on, especially when it comes to accurate and tamper-proof data.

Chainlink price was trading inside a bullish pennant for more than two months. This setup contains an initial spike in LINK’s market value known as the flag pole, followed by consolidation into a pennant.

The continuation pattern forecasts a 53% bull rally to $45.2, determined by adding the flag pole’s height to the breakout point at $29.41. The oracle token sliced through the pennant’s upper trend line on April 1, signaling the start of an uptrend.

So far, LINK has surged nearly 43%, which leaves another 7% surge on the table. While the target is only a few ticks away, the Momentum Reversal Indicator seems to have flashed a cycle top signal in the form of a red-one candlestick on the 12-hour chart.

This setup projects a one-to-four candlestick correction to either $39.05 or $37.19 demand barriers.

Following this pullback, investors can expect a healthy surge in bullish momentum that propels Chainlink price toward the intended target at $45.2.

In case of a sell-off, LINK might even bounce off the support level at $34.75, which provided a strong foothold for the second leg of the bull rally after the breakout. 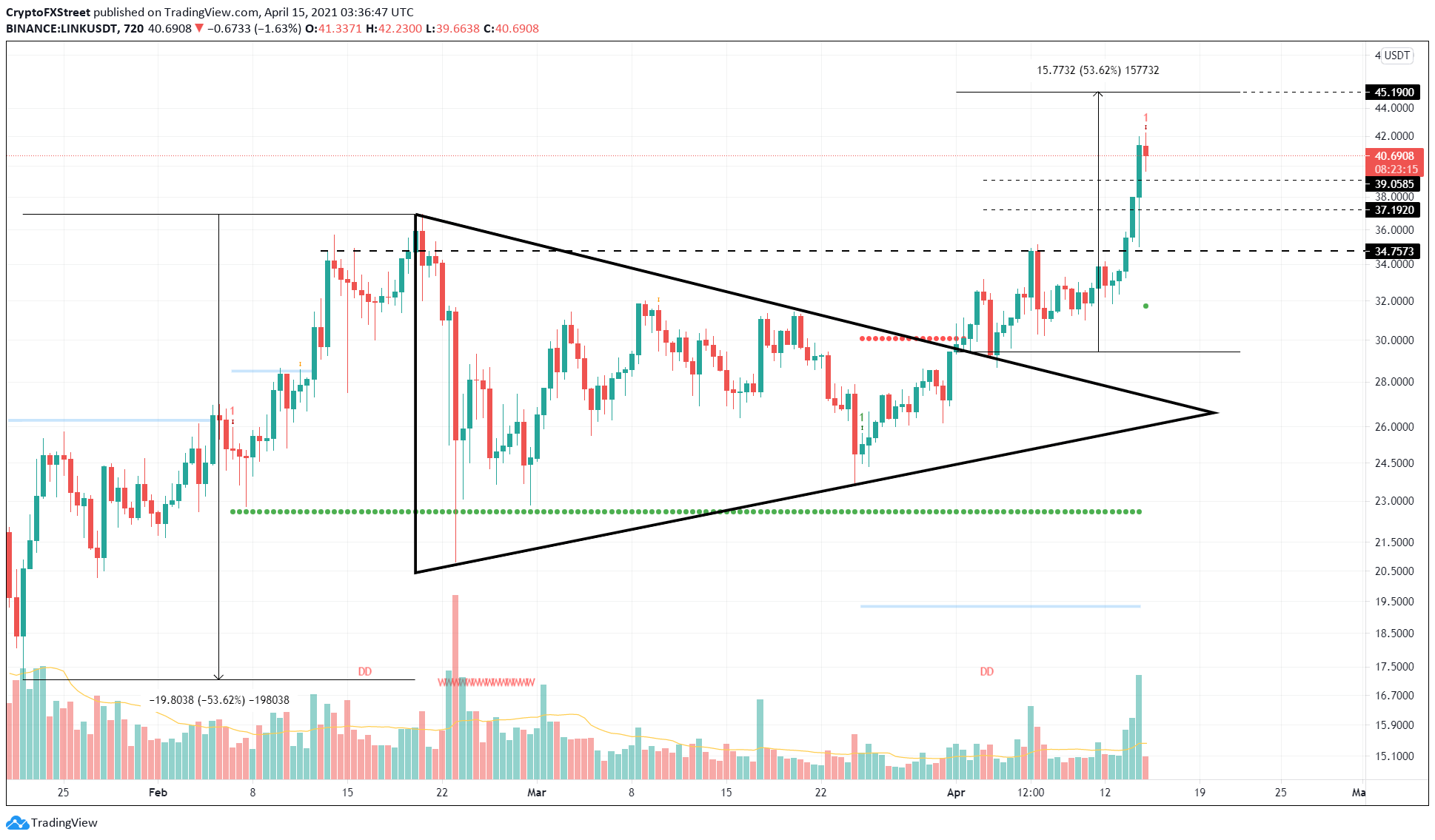 While things seem to be looking up for Chainlink price, a range-bound move below the $34.75 level could spell disaster for the oracle token. Additionally, a sudden spike in selling pressure might result in descent to $31.8, which is an 8% drop.

Chainlink Network will now receive high-quality price feeds from traditional markets via data provider New Change FX. LINK price shows signs of exhaustion as the MRI flashed a cycle top signal. A minor retracement will arrive before a climb to record levels at $45.2. Chainlink adoption has been on a tear during this recent bull run. Likewise, LINK price explored into the discovery phase as it erected new all-time highs. Traditional market data enters cryptocurrency ecosystem Chainlink oracles will get a boost as New Change FX, a data and analytics firm, announced that it would make its regulated benchmarks for…