BTC/USD is currently trading at $8911 (+4.80%), as the price receives some respite from harsh selling pressure. Catching support from critical ascending trend line. 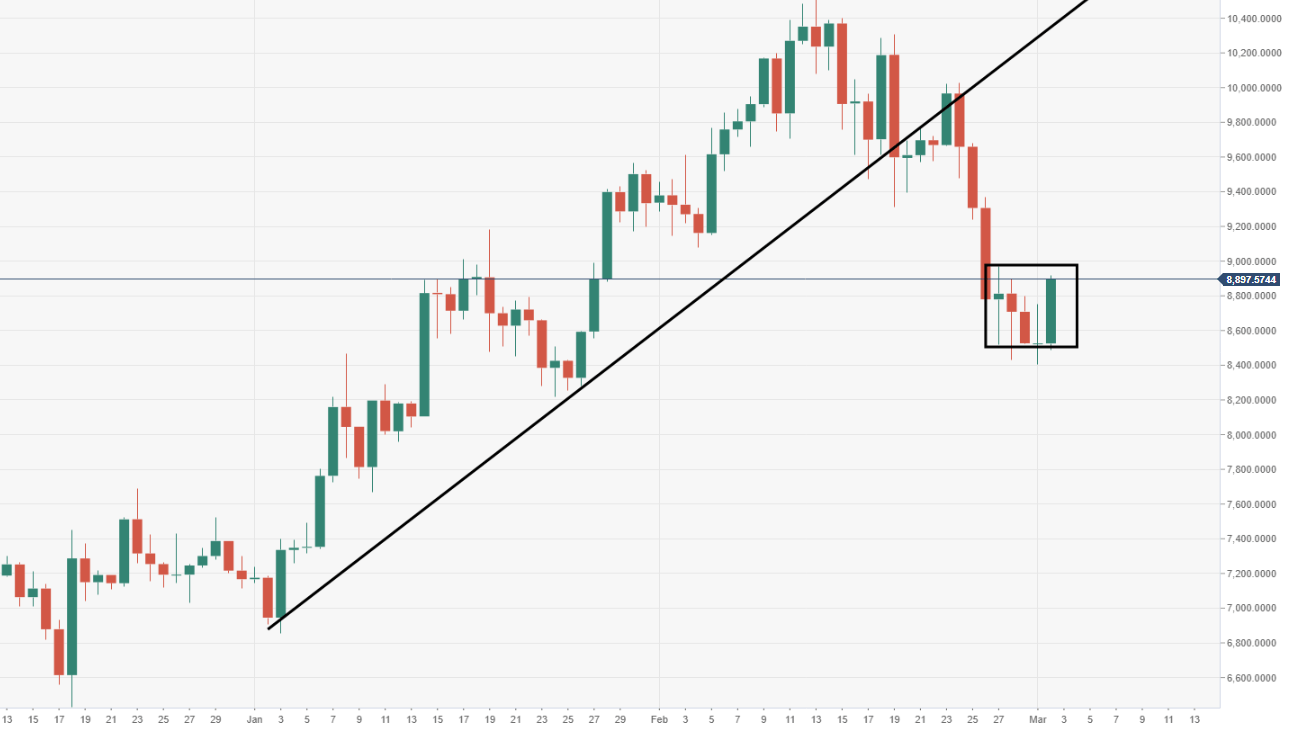 Bitcoin (BTC) has hit a new all-time high in terms of hash rate despite dropping almost 12% last week, data suggests. According to various resources tracking hash rate growth on the Bitcoin network, the metric was circling its highest value ever as of March 1.

Ripple just unlocked one billion XRP from escrow. The amount is worth approximately $226 million. This move has been spotted by cryptocurrency whale watchers and now the question is up again regarding the quantity of the XRP the San Francisco-based startup is selling on a monthly basis. Once a month, one billion XRP coins get unlocked from Ripple’s escrow wallet

Brad Garlinghouse, the CEO of Ripple,“We would not be profitable or cash flow positive without selling our XRP holdings. We XRP is one source. I don’t know how to answer that because if you took away our software revenue, we’ll become less profitable. If you took away all our XRP, that makes us less profitable. So I don’t think about it as one thing.”

A United States Securities and Exchange Commission (SEC) 8-K filing by remittance processor, MoneyGram, has revealed that Ripple has been injecting a significant amount of funds into the business since its investment in the company in June 2019.

Jon Cuncliffe, the deputy governor for the financial stability of the United Kingdom’s central bank, the Bank of England (BoE), has warned that the emergence of a cryptocurrency economy may weaken or eliminate bank credit issuance.

While global governments are competing to become the first country in the world to issue a central bank digital currency (CBDC), no CBDC project really focuses on cross-border payments, according to a new study released by the Bank for International Settlements (BIS).

Bahamas is pushing ahead with its central bank digital currency (CBDC), dubbed the ‘Sand Dollar’. Pilot projects have already reached two of its largest island chains.

It’s hilarious that I have the reputation for being someone who does “not short.” I do not short Bitcoin because I am American and don’t trust any of the leverage exchanges. I rarely short the stock market – the conditions have to be perfect. When I do, it’s heavy.