The cryptocurrency landscape is painted mainly in red as cryptoassets start to give in to selling pressure. Last week was an incredible week for selected altcoins such as Cardano, Tezos, Stellar and Dogecoin among others. The altcoins surged massively rising above some key resistance levels. However, the price actions hit walls leading to the ongoing retreats.

The largest cryptocurrency, Bitcoin is also in the red in spite of holding above $9,200. Price movements above $9,300 are becoming scarce with stagnation carrying the day. BTC/USD is dancing at $9,175 after dropping from $9,236.20 (opening value).

On the upside, $9,239.18 is the intraday high which fell short of the initial hurdle at $9,250. With the prevailing trend mainly bearish, chances of Bitcoin recovering above $9,300 are becoming slimmer. On the flip side, losses towards $9,000 are apparent.

Ethereum is also in the red with losses amounting to 0.9% on the day. The price is inching far away from the recent pivotal level at $240. Ether is trading at $237 but unlike Bitcoin, a weak bullish momentum is building up and supported by expanding volatility. Recovery above $240 is key for gains towards the psychological $250.

The fourth-largest cryptocurrency, Ripple is also on a downward roll after it recently hit a wall above $0.21. Like Ethereum and Bitcoin, Ripple has also lost its support at $0.20. XRP/USD is trading at $0.1960 amid a building bearish momentum. Losses are likely to continue unless bulls reclaim the position above $0.20.

Chart of the day: AOA/USDT 1-hour

Bitcoin hash rate: The measure of the computational power channeled towards BTC mining hit an all-time high on July 13. As the hash rate surged, Bitcoin price continued with the lull consolidating in the range between $9,000 and $9,400.

According to CoinCorner’s Matt Ward, the hash rate rose to 147.88 exahashes; a figure that is ten times higher than the hash rate when Bitcoin exchanged hands at $20,000. Ward reckoned that “the higher the hash rate, the more secure the network is.” 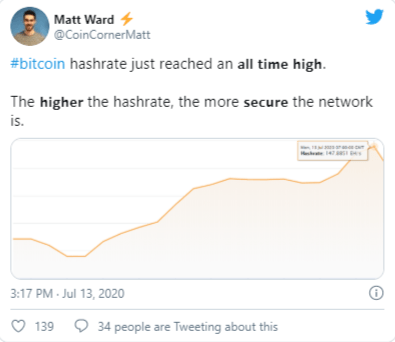 Consequently, Bitcoin’s ardent support and investor, Max Keiser that higher hash rate within the network tends to signal an incoming rally. He added that it also highlights the increasing confidence in the crypto. On the flip side, fiat money is likely to lose dominance to Bitcoin.

Hashrate precedes price BTC. Bitcoin price – not that important – as Gold price is not that important since both BTC and Gold trade inversely with the USD. BTC hashrate increasing shows confidence in fiat money collapsing Soon, BTC will actually be drawing energy away from fiat.

Ethereum as a network has been a great influence and enabler of innovation in the cryptocurrency industry. The emergence of decentralized finance (DeFi), decentralized exchanges, stable coins as well as layer-2 blockchain solutions all have Ethereum as the backing platform.

Activity within the network has also surged in the last three months with the number of Ethereum addresses increasing by over 350%. The wallets holding at least 0.1 ETH hit an all-time high in June. Recently, the DeFi system also hit an all-time after crossing the $2 billion mark. However, Ethereum’s price has remained in consolidation around $240 ignoring the growth of the network.

Quote of the day:

We are looking at the question of, should we create a Bank of England digital currency. We’ll go on looking at it, as it does have huge implications on the nature of payments and society. @Adrew Bailey

Get the 5 most predictable currency pairs
Previous ArticleUSD/JPY forecasted to remain within range near-term – UOB
Next Article EUR/JPY targets the 200-week moving average at 124.70 – Commerzbank