Cryptocurrency Market Update: Ripple puts altcoins in the spotlight as NEO and Dash catch the pace

The cryptocurrency market is relatively in the green, however, some digital assets are performing better than the others. For example, Ripple is trading 10% higher in a 24-hour period. On a daily basis, XRP is up 4.44%. Bitcoin is trading subtly upwards and hovering around $9,200. Ethereum, on the other hand, has grown 1.4% higher on the day.

Ripple is arguably the best-performing crypto on the market. The massive gains in a relatively bullish market are likely to have been a result of the partnership between a Nasdaq-listed international remittance company referred to as Money Express otherwise known as (Intermex).

Intermex is adopting Ripple’s On-Demand Liquidity (ODL) solution which utilizes XRP for cross-border transfers. The announcement was made by the two firms of Wednesday. The CEO of Intermex, Bob Lisy said in regards to the partnership:

“We are pleased to have begun the partnership with the Ripple team, and look forward to implementing new solutions on RippleNet and ODL to help drive growth and deliver greater efficiency.”

“Intermex is one of the largest U.S. to Mexico remitter service providers in the world—processing more than 30 million payment transactions a year through a network of 100,000 payer locations.”

At the time of writing Ripple is trading at $0.2787 after adjusting from $0.2817 (intraday high). It is apparent that XRP is unlikely to break past $0.3, although the level remains to be the buyers’ short term goal. TraderSmokey, a popular analyst on Twitter said XRP closing above the 200-day SMA suggests that more upside action seems imminent.

XRP Daily Close Update: Closed above the 200MA + Kumo Breakout on Poloniex, not yet on Binance though. Either way, highly bullish in my opinion. I could see a small retrace but ultimately I think XRP will run to 3744 Sats in the coming days / weeks. 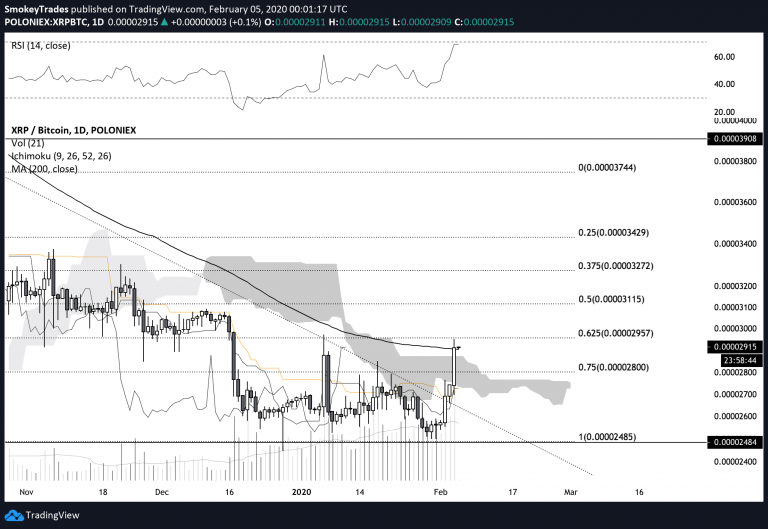 NEO is also sending fireworks across the cryptocurrency skyline just like XRP. The cryptoasset is up 4.43% on the day and trading at $12.68. The bulls remain largely in control during the European hours and the trend is expected to continue in the remaining sessions. However, traders should watch the RSI for reversal signals as well.

On the other hand, Dash is doing a great job catching up with both Ripple and NEO. It is up until 2.7% on the day while still maintaining a bullish trend. Dash has already jumped above the critical $115 hurdle but failed to sustain gains towards $120. It is essential that the buyers remain focused on breaking above $120 in the near term.

Ripple price has the ingredients for a sole rally likely to break above $0.30. NEO and Dash react in tandem with Ripple as Bitcoin’s dominance in the market falters. The cryptocurrency market is relatively in the green, however, some digital assets are performing better than the others. For example, Ripple is trading 10% higher in a 24-hour period. On a daily basis, XRP is up 4.44%. Bitcoin is trading subtly upwards and hovering around $9,200. Ethereum, on the other hand, has grown 1.4% higher on the day. Ripple price spikes on new partnership news Ripple is arguably the best-performing crypto…