The craze surrounding DeFi has relatively settled down since the September crash. IntoTheBlock noted on Twitter that the ratio of DeFi tokens’ market cap to Ethereum went from being around 25% in late August to just over 15%. As per Santiment, the total market cap of the DeFi space currently stands at $5.35 billion. We are going to put the three biggest losers in the DeFi space under the microscope – Loopring (LRC), SushiSwap (SUSHI) and Band Protocol (BAND). 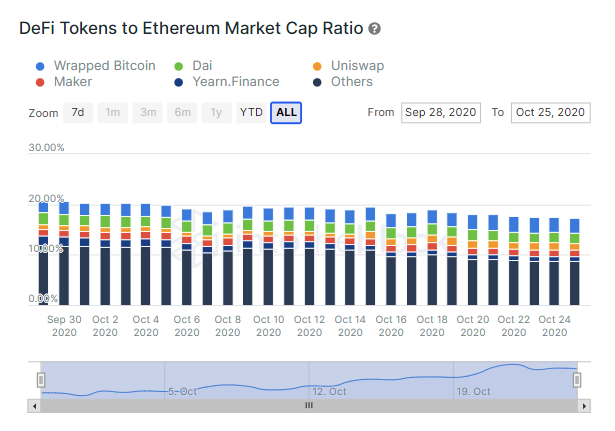 Loopring goes for a dive

The MACD shows increasing bearish momentum, so a further downturn in price is expected. IntoTheBlock’s In/Out of the Money Around Price (IOMAP) shows two strong support walls at $0.134 and $0.125. The latter is strong enough to absorb a significant amount of sell pressure.

The price has two strong resistance barriers, $0.67 and $0.695, as defined by the IOMAP. However, there is a lack of healthy support zones on the downside, which doesn’t bode well for the bulls. As such, one can expect the price to fall below $0.62.

Band Protocol in a downtrend

As per the IOMAP, previously at the $5.55 barrier, 182 addresses had purchased 372,000 BAND tokens. Looking at the downside, there is a lack of healthy support walls. As such, it won’t be a surprise to see the asset drop below $4.15.

For LRC, the bears will look to drop the price to $0.125. That’s the most notable zone for this asset.

SUSHI bulls will need to make sure that the price doesn’t fall below $0.62 to prevent a catastrophic drop.

Similarly, BAND buyers need to make sure that the asset doesn’t fall below $4.15. Quietly like SUSHI, BAND also doesn’t have any healthy support walls.

EUR/AUD stalls at resistance, AUD has been through the wars