Crypto crash! El Salvador’s experiment with bitcoin has turned out to be a risk not just for the citizens of the central American country but for the entire crypto market, with $500 billion wiped off the market and bitcoin trading down 10% at $46,000.

Ripple’s XRP is holding just above the all-important $1.04 but has seen a quarter of its value evaporate even as the court risks surrounding the SEC case lessen.

Another trading favourite Cardano, which is set to launch its smart contract feature in days, is 21% lower at $2.25. 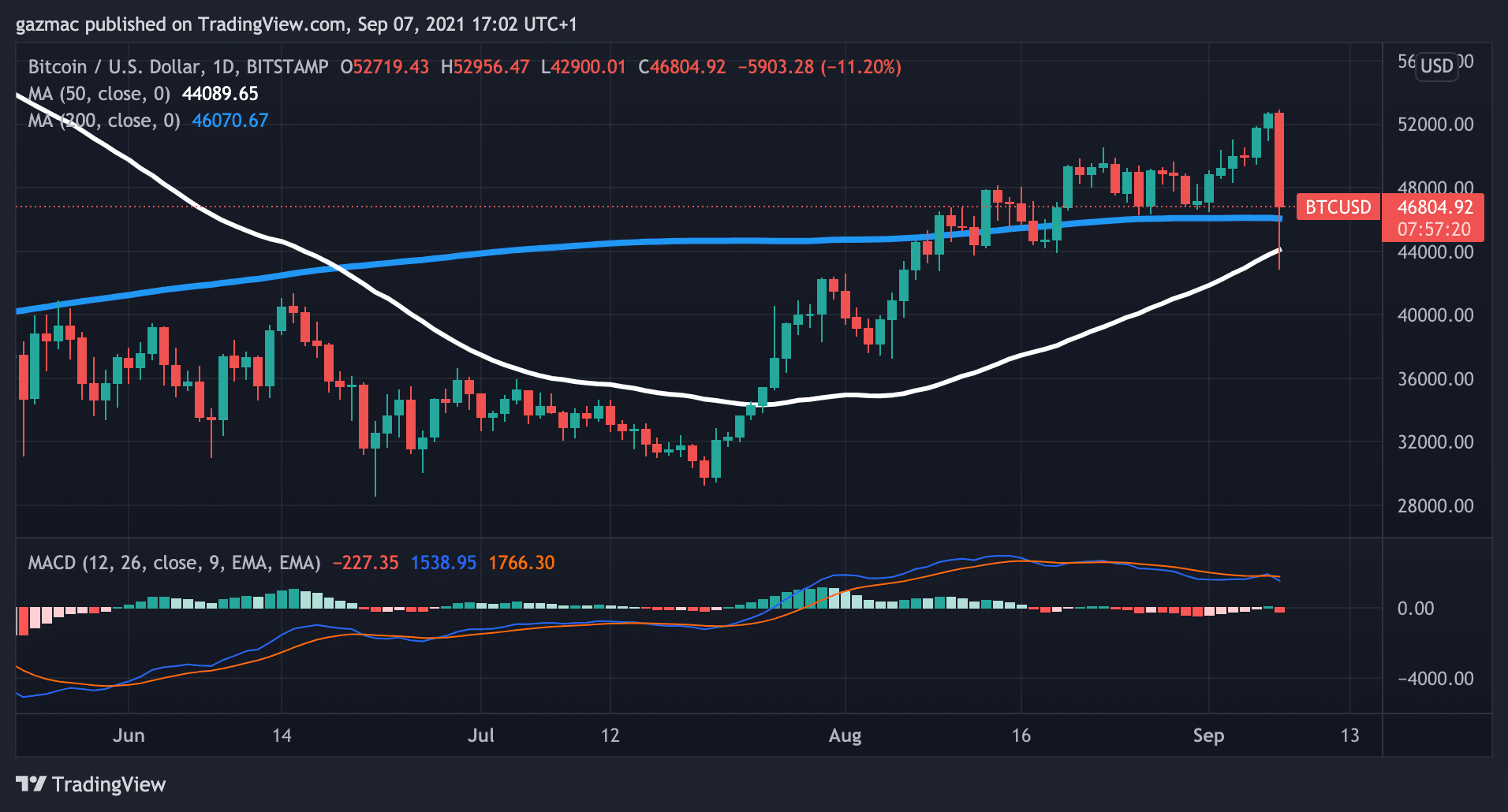 Solana (SOL), Fantom (FTT) and HEX in the green

However, holders of HEX, the so-called certificate of deposit crypto that has been dogged by controversy, are still smiling, with the coin up 5% at $0.37, although off its highs at $0.40.

El Salvador made bitcoin legal tender in the country today, but the initiative has had a rocky start to put it mildly.

The wallet – known as the Chivo (which means ‘cool’) fell over due to the load on servers.  President Nayib Bukele claims that the only way to fix the problem was to take the wallet offline.

El Salvador’s government is sending $30 to citizens via the Chivo wallet – presumably after they get it working.

The speed at which the digital currency has been adopted is likely the reason for the shaky rollout. There has been little education or training provided to the citizenry before the launch and that has led to protests. Some worry that only the crypto insiders will benefit.

The IMF has described the adoption of bitcoin by El Salvador as “dangerous” and the World Bank refused to help the country with its adoption process. Rating’s agency Moody’s has also downgraded the country’s debt, citing the risks associated with using bitcoin as legal tender.

Theoretically because BTC is legal tender, El Salvador’s foreign exchange reserves are now open to being transformed into bitcoin holdings which open’s its reserves to massive volatility risk.

This also applies to citizens who could find assets denominated in bitcoin subject to huge depreciation if the price of bitcoin drops dramatically as it is now.

Nevertheless, crypto true believers still see digital currencies as the future of money and a route to a fairer monetary system which addresses the underserved needs of the unbanked around the world.

However, the government of the South American country hopes bitcoin a legal tender will kickstart economic growth by attracting crypto investors and reduce the costs faced by those sending remittance payments to relatives in the country.

Agnostic traders on the other hand may treat the current crash as a buying opportunity for a host of crypto – at least after some frantic profit-taking.

The fact that Solana is still trading higher today is indicative of the strength in the marketplace as investors look for opportunities in the still nascent blockchain space, where use cases are starting to gain traction, such as in NFTs and DeFi.

Looking to buy or trade crypto now? Invest at eToro!

Crypto crash! El Salvador's experiment with bitcoin has turned out to be a risk not just for the citizens of the central American country but for the entire crypto market, with $500 billion wiped off the market and bitcoin trading down 10% at $46,000. Bitcoin fell as much as 17% to $43,000 at one stage. Ethereum, which has been leading the market higher of late, is off 15% at $3,322, although "ethereum killler" Solana is still holding on to the green, up 0.5% at %146 at one stage and is now back up 8% at $160, although it was trading…