Elrond Network’s latest development is significant, especially considering the hype around prediction markets. Mirroring the bullishness of the recent integration, the EGLD price prepares for a massive bull run as it nears the end of consolidation.

Elrond, the internet-scale blockchain, announced integration with Polkamarkets. This latest development among a barrage of other significant updates seen on the EGLD blockchain is crucial since it brings the prediction market to its platform.

Users can now monetize predictions via the Elrond blockchain on various events like the amount of eGold staked on a certain date, smart contract outcomes, prices and so on.

Blockchain technology is the missing piece enabling us to productively use the collective wisdom of the internet. The collaboration with Polkamarkets enables owners of use-cases deployed on the Elrond Network to introduce intelligent triggers into their decision making.

With the help of blockchain technology, predictions can be completely decentralized and reliable. It is estimated that prediction markets’ volume involving the US presidential elections is on average about 50% of the campaign budgets. This metric paints a picture of the prediction market landscape.

While this collaboration is just the start, Elrond aims for a deeper integration that might involve issuing a portion of the $POLK circulating supply as Elrond ESDT tokens.

The Elrond price is trading in a symmetrical triangle-like pattern known as a pennant. The 540% price spike that precedes this consolidation is known as the flag pole. Together, the technical formation is a continuation pattern called a bullish pennant.

This setup forecasts an 85% upswing, determined by measuring the flag pole’s height and adding it to the breakout point at $147.98. If achieved, this target places EGLD at $272.86.

EGLD is getting squeezed as it approaches the end of the pennant. If the buyers manage a decisive candlestick close above $147.98, it will mark the start of a bull run. In order for the bull rally to continue, this breakout needs to have a substantial volume backing it. 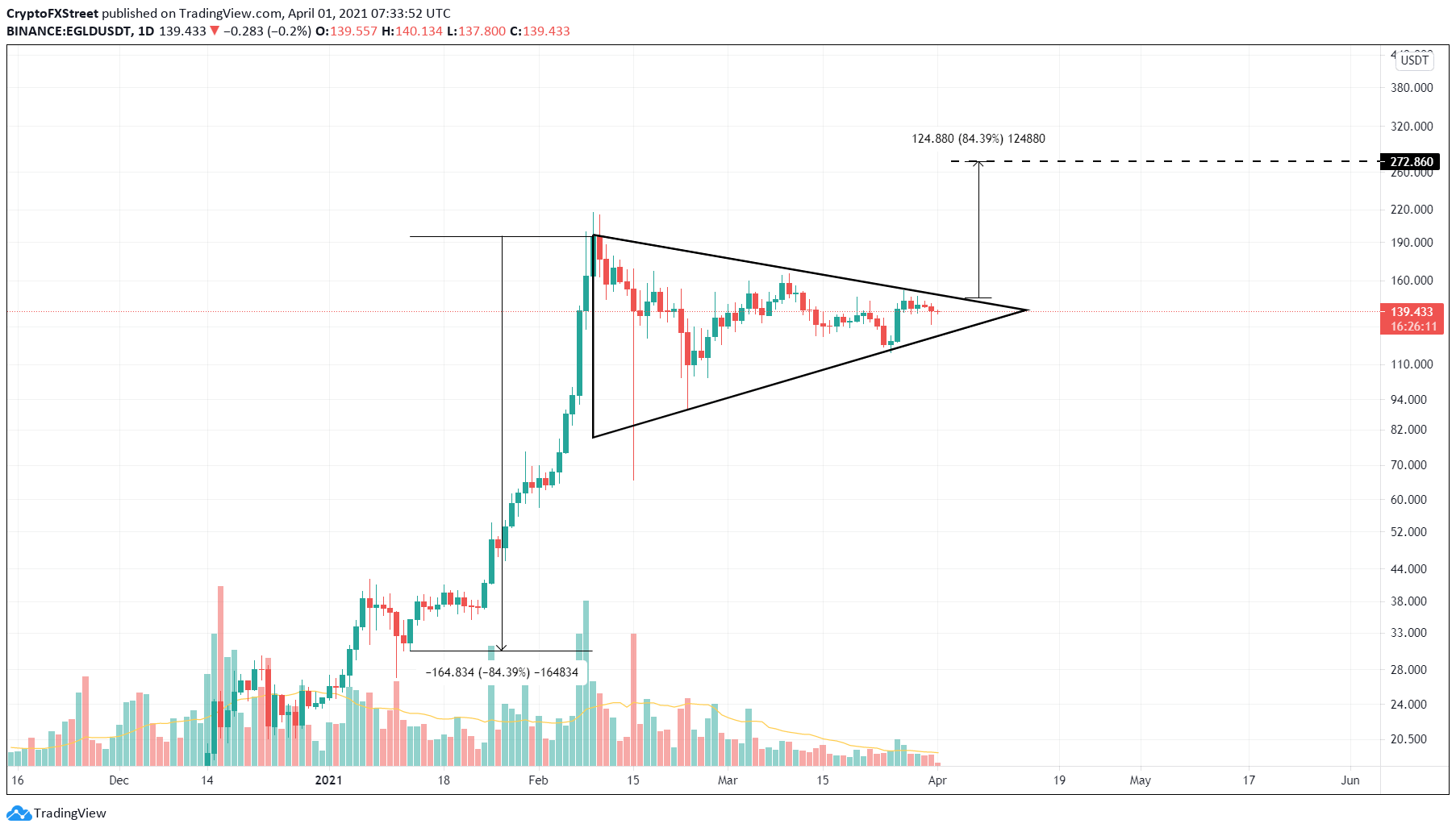 EUR/JPY Price Analysis: Room for a move to 2021 highs

Elrond Network integrates a prediction market via Polkamarkets. Users can monetize their predictions on events such as smart contract outcomes or asset prices. EGLD price prepares for an 85% liftoff as it nears the end of a bullish pennant pattern. Elrond Network's latest development is significant, especially considering the hype around prediction markets. Mirroring the bullishness of the recent integration, the EGLD price prepares for a massive bull run as it nears the end of consolidation. Prediction markets meet internet-scale blockchain, Elrond Elrond, the internet-scale blockchain, announced integration with Polkamarkets. This latest development among a barrage of other significant updates…