Latest
You are at:Home»Crypto News»Elrond price poised for a 50% decline despite new EGLD staking mechanisms

Elrond price is on the cusp of a significant decline that will shatter trend line support and could drive EGLD down to the February low at $89.31.

Elrond seeks to capitalize on the incredible momentum for the ecosystem

In a new staking proposal, EGLD offers an interim adaptation of some staking mechanisms to better align incentives towards further decentralization.

The Staking Phase 3.5 project targets three significant changes: adjust APR for base and top-up stake, allow current validators to become staking providers, as well as for validator nodes to be merged into staking pools.

Concerning the top-up APR and Base APR, the plan is to decrease the APR for base stake from 21% base to 20% and raise the APR for top-up stake from 9% to 14%. By reducing the gap in rewards between base and top-up stake, staking more “EGLD becomes more attractive and therefore staking providers can increase their striking caps.”

Secondly, an existing validator using their staked EGLD has to unstake, unbound and create a new staking pool to become a staking provider. In the future, a “validator can choose to transform its standalone validator nodes staked from its own wallet into a staking pool.”

The third change solves the problem of merging existing validators and existing staking pools. At the moment, to add more validators, they need to set up a node, stake EGLD and wait for the validator to go through the queue while not earning rewards. Following the change, a staking pool will whitelist an external wallet and thus, all the validator nodes staked from that wallet.

The whitelisted wallet can then merge its stake with the Pool’s stake, and all the rewards will be distributed accordingly.

It is anticipated that the changes will be implemented by the middle of June, ensuring the momentum in the staking community continues moving forward. Moreover, a definitive proof of stake ecosystem will lead to higher decentralization and augmented network security, thereby attracting more valuable use cases.

Since February, Elrond price has been a clear laggard relative to the broader crypto complex, shaping a bearish price pattern that has been barely supported by a multi-month trendline beginning in mid-February. Adding some support has been the 50-day simple moving average (SMA)

The most recent attempt at a new all-time was short-lived, falling victim to the critical resistance at the 161.8% Fibonacci extension of the 2019-2020 decline at $233.36. The extension level also halted the rally in February.

It may be an organic catalyst or bearish turn in the entire cryptocurrency market. Still, Elrond price is poised for a notable decline in the weeks ahead, potentially reaching 50% from the current price.

Once Elrond price closes below the dominant trend line, selling pressures should overwhelm the altcoin, sending it down to the April 18 low at $124.22. Additional support emerges at the 23.6% retracement of the rally beginning in late October 2020 through April at $106.01.

The bearish target for Elrond price is at the confluence of the 200-day SMA at $89.23 with the February low of $89.31. Any further weakness will reflect an accelerated deterioration in the fundamental outlook for the Elrond network. 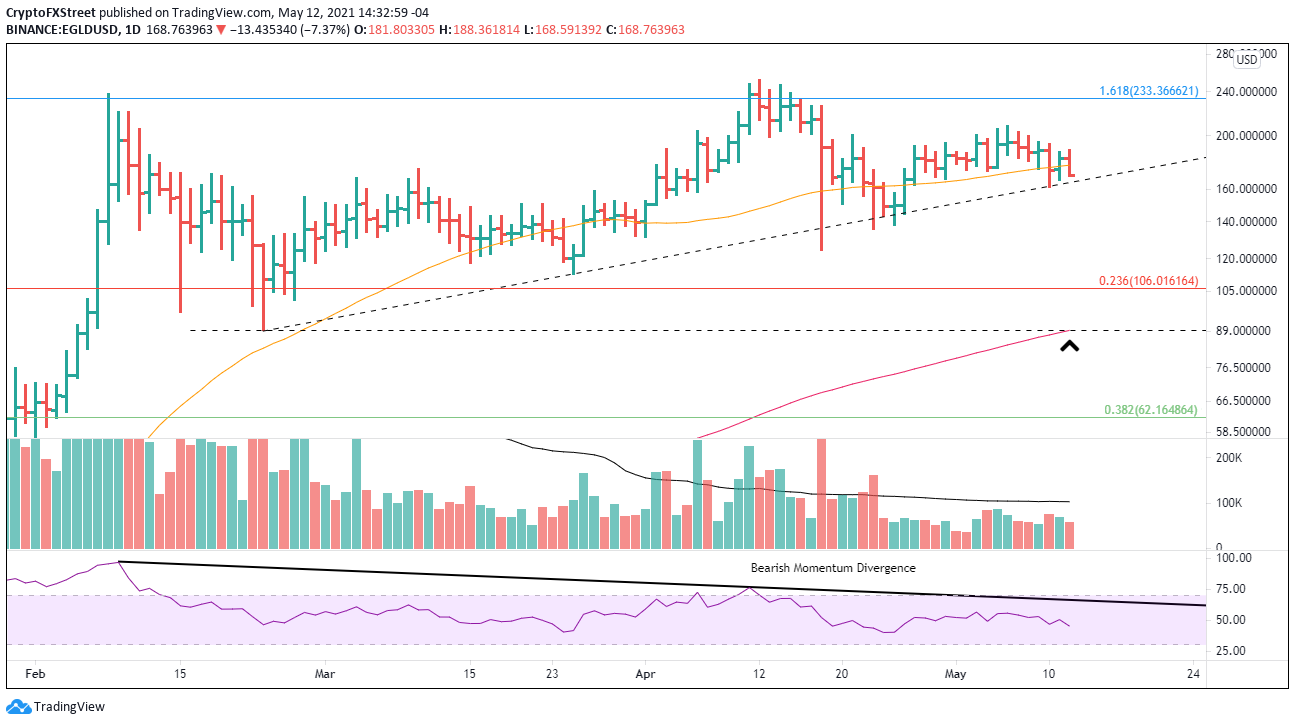 The probability of Elrond price arresting the bearish conditions resides near zero, but if the digital token does experience a breath of strength, the only resistance of relevance is the 161.8% extension level of the 2019-2020 decline.

Get the 5 most predictable currency pairs
Previous ArticleAUD/USD remains on track to close below 0.7750, loses more than 1%
Next Article Forex Today: Dollar runs on tightening speculation