Like Bitcoin, Ethereum has a record-breaking number of options contracts (460,000) expiring this Friday, September 25th. 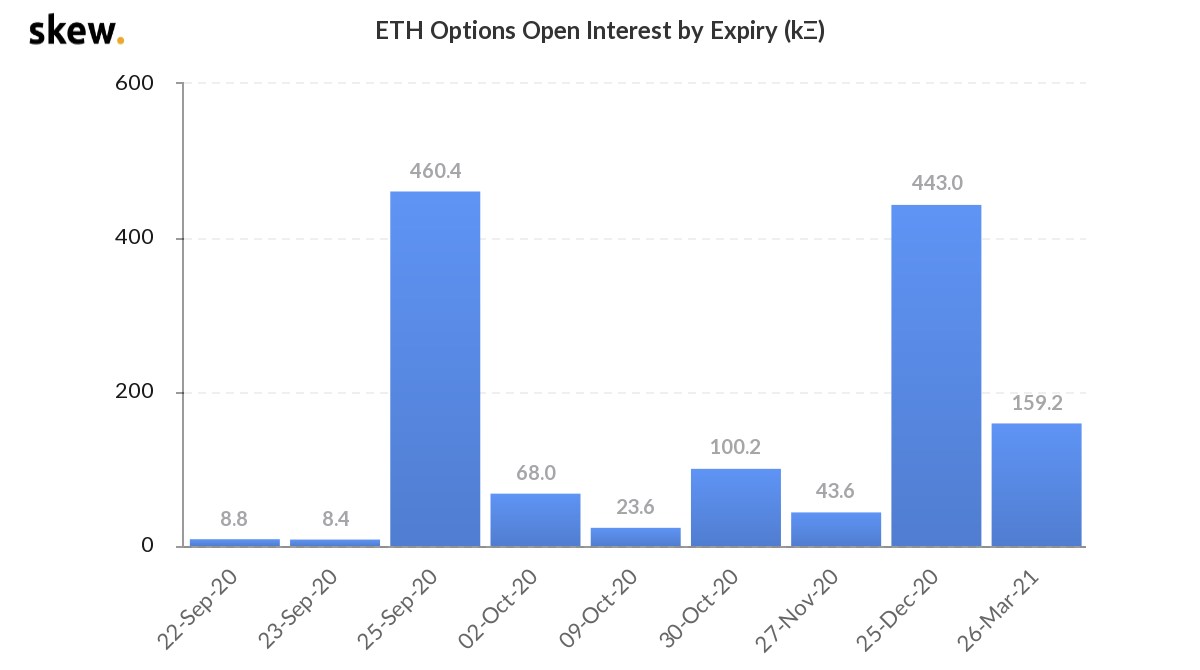 The expiration of this large sum is going to add to the existing volatility. Traders are currently on the lookout to  “hedge exposure on these positions, work out of them, or possibly take action in the spot market in anticipation.”

Diginex CEO compares the DeFi boom to the 2017 ICO craze

Decentralized finance (DeFi) is the latest, on-going trend in the cryptocurrency space. However, Richard Byworth, the CEO of Diginex, believes DeFi is still in its infancy. He also hopes that the DeFi space will not be like the ICOs craze in 2017.

The total value locked (TVL) across all DeFi platforms has surpassed $9 billion. Still, it is relatively small compared to the multi-trillion-dollar financial services industry. Echoing this sentiment, Byworth said that DeFi at the moment “is like trying to fly to the moon in a cardboard box.”

The failed experiments and inconsistency in the DeFi sector could taint the image of the space for new entrants, added the CEO. Byworth recalled the trend of initial coin offerings (ICOs) in 2017. The trend was later stomped out by regulation. In recent weeks, DeFi has given off similar vibes, with many assets spiking in price, as per Byworth.

I definitely look back to 2017, and this DeFi thing is probably not what we need right now. We’ve got MicroStrategy coming in, we’ve got Paul Tudor Jones coming in, we’ve got some really serious hitters starting to pay attention to this industry and I just hope that DeFi doesn’t become another ICO craze that people go, “you know what, everyone’s crazy in crypto,” and stay away from it for another few years.

Byworth is not the only industry expert comparing the current DeFi scene to the 2017 ICO. Messari founder Ryan Selkis recently noted that the DeFi bubble will burst shortly.

ICOs boomed for a while because everyone (laughably) thought there would be a coordinating utility token for every industry. DeFi is just one big pool of capital sloshing around a small group of insiders and mercenaries who will soon run out of victims to fleece.

ETH broke below the ascending triangle formation and the Bollinger Band this Wednesday and is currently priced around $325.75. The bulls have since entered the market and taken ETH back inside the band. However, this looks like a temporary reprieve as all signs point to an imminent bearish breakout. The Bollinger band has ceased squeezing and have started widening again. This shows the price consolidation period is over and the market is getting ready for a breakout. The MACD tells us that the market momentum is bearish.

So, if the price does fall, how far down is it going to go? For that, we will check the IOMAP.

IntoTheBlock’s “In/Out of the Money Around Price” (IOMAP) model reveals that there are weak-to-moderate supply barriers on the downside. If the second-largest cryptocurrency by market cap comes crashing down, the only notable supply wall that can stem the flow is at $300. In this level, 765.26k addresses have bought a total of 1.81M ETH. On the upside, the IOMAP reveals moderate-to-strong resistance walls.

Spikes in Santiment’s age consumed metric usually precedes a sudden price movement. This movement can be both bearish or bullish. As you can see, there were a couple of spikes this Wednesday with 113.85M and 85.27M age consumed coins. Following these spikes, the price has dipped in the short term.