Home » Ethereum Price Prediction: ETH braces for a challenging ride to $400, what to expect?

Ethereum Price Prediction: ETH braces for a challenging ride to $400, what to expect?

Ethereum is still trading within an ascending channel despite the recent rejection at $390. The losses extended below $360 tentative support to $353 last week, but recovery ensued with ETH/USD recovery the some of the lost ground above $360. However, the upside is still limited under $370.

The RSI shows the smart contract token falling into consolidation, especially with the Relative Strength Index (RSI) in the 6-hour timeframe at the midline. The ascending channel support must be supported at all costs because a slide under it could see Ether quickly refresh the support levels at $340.

According to on-chain data analyzed by Santiment, a leading blockchain data analytics platform, Ethereum Github activities have continued to spike, even hitting a 7-month high. Perhaps this is as a result of the developments within the Decentralized Finance (DeFi) ecosystem. Moreover, Ethereum is still the go-to platform for smart contracts development, launch, and execution. Besides, the activities could also be fueled by the ERC-20 and other token standards within the network.

@santimentfeed is indicating that #Ethereum is reaching #Github development rates not seen since February (a 7-month high)!$ETH continues to make its case as the most highly innovative network in #crypto, including the many ERC-20’s under its umbrella. https://t.co/QcE1g1xeOK pic.twitter.com/25H7E83Ooj

Ethereum nurtures the bullish case to $400

After recovery above $360, Ethereum bulls are not ready to give up on the mission to trade above $400. The 4-hour chart shows the price trading above the 50 Simple Moving Average (SMA) while the Relative Strength Index (RSI) recovers. Price action past the short term resistance at $370 would help shift the bulls’ focus to the next critical seller congestion zone at $380. The 100 SMA at $387 is also a formidable resistance that must come down for gains beyond $390 to materialize in line with the grand plan of breaking over $400.

The hourly timeframe chart emphasizes Ether’s developing bullish case within an ascending channel. Without a doubt, recovery will not come easy, especially with the price trading under the moving averages (the 100 SMA holding the ground at $370 and 50 SMA at $373.37). The RSI has improved to the midline from a dip into the oversold on September 13. There is a possibility of a leveling motion at 50 (midline), which would signal consolidation taking over.

Data by IntoTheBlock highlights the tough resistance Ethereum will face going towards $400. If the initial hurdle between $368 and $378 is broken, the run-to $400 not be simple considering the 1.14 million addresses that previously bought 2.6 million ETH between $378 and $389. Also, another 920,600 addresses bought 1.51 million ETH in the range between $389 and $400. It means that buyers must work extremely hard to outdo the selling pressure towards $400. 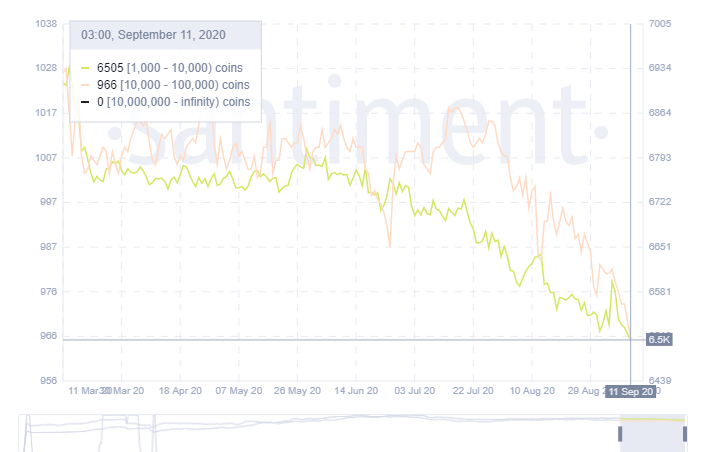 From the above data, Ethereum could abandon the bullish case to $400 in favor of a drop to $334 support. However, it is essential to realize that buyers are not ready to give up without a fight, hence keeping ETH within the initial support $355- $366 until a clear path to $400 is established. The bearish outlook is also confirmed by the move made by the whales to offload their coins. In other words, the largest holders of Ethereum expect the price to go lower in the near term.

EUR/JPY Price Analysis: Mildly offered inside a triangle above 100-HMA

Ethereum's short term technical outlook is bullish with the price recovery from $353. ETH/USD is heading into a cluster of resistance, as highlighted by on-chain metrics. Ethereum whales start to offload their holdings, hinting a possible breakdown to $330. Ethereum is still trading within an ascending channel despite the recent rejection at $390. The losses extended below $360 tentative support to $353 last week, but recovery ensued with ETH/USD recovery the some of the lost ground above $360. However, the upside is still limited under $370. The RSI shows the smart contract token falling into consolidation, especially with the Relative…