Ethereum price has catapulted almost 27% today after closing last week with the most significant weekly loss since trading began. At the time of writing, the 27% gain would be the largest one-day gain since December 12, 2017. There is a high probability that ETH has printed the correction low and has shifted to building a new base for a test of the all-time highs.

On May 12, Elon Musk announced that Tesla would no longer accept BTC as a payment method after realizing that Bitcoin mining used too much energy, primarily generated from fossil fuel.

Ethereum, the biggest rival for Bitcoin, appears to be on its way to solving the energy consumption problem by restructuring the underlying blockchain network that enables crypto transactions.

The restructure targets the proof of work system, a consensus structure that Bitcoin and Ethereum currently use to confirm transactions and add new blocks to the chain. The proof of work system needs an expansive network of computing capacity to run simultaneously every time a crypto transaction occurs, thereby generating substantial energy costs. According to the Cambridge Bitcoin Electricity Consumption Index, the current Bitcoin network supporting transactions uses more power per year than Pakistan.

Today, Elon Musk reiterated his interest in lowering energy consumption by miners by tweeting that he has engaged North American Bitcoin miners about current and planned renewable energy use.

Ethereum is switching to proof of stake to replace the proof of work system, where only Ether holders, not miners, are likely to be selected to confirm transactions. In proof of stake, miners invest Ether they already own, instead of footing enormous energy bills, in the  race for the next set of transactions, which will be ultimately rewarded with free cryptocurrency. As a result, the only energy cost to be derived is from servers that host Ethereum nodes.

In a Bloomberg interview this weekend, Ethereum founder Vitalik Buterin said the switch to proof of stake was “more urgent for us because of how crypto and Ethereum have grown over the last year.” According to Buterin, the transition solves “one of the biggest problems of blockchain.”

It is anticipated that the ETH transition from proof of work to proof of stake will take the current use of 45,000 gigawatt  hours per year and cut it to 1/10,000 of the energy.

Ethereum price full upside potential has yet to be realized

Yesterday, Ethereum price did fall below the May 19 low at $1,900 but rebounded strongly to close above the critical February high at $2,041.42. During the rebound, the smart contracts token generated a bullish hammer candlestick pattern on the 12-hour chart.

At yesterday’s low, ETH had fallen 60% from the all-time high and registered an oversold reading on the 12-hour chart.

Today, Ethereum price triggered the hammer candlestick pattern when it rallied above yesterday’s hammer high of $2,155. A 12-hour close above the candlestick preceding the hammer at $2,382 would confirm the signal.

The first technical obstacle for a continuation of the rebound is the 50-day simple moving average (SMA) at $2,797, followed closely by the double bottom trigger price of $2,999. An Ethereum price break out above $2,999 would further confirm that a long-term low has been printed in ETH. 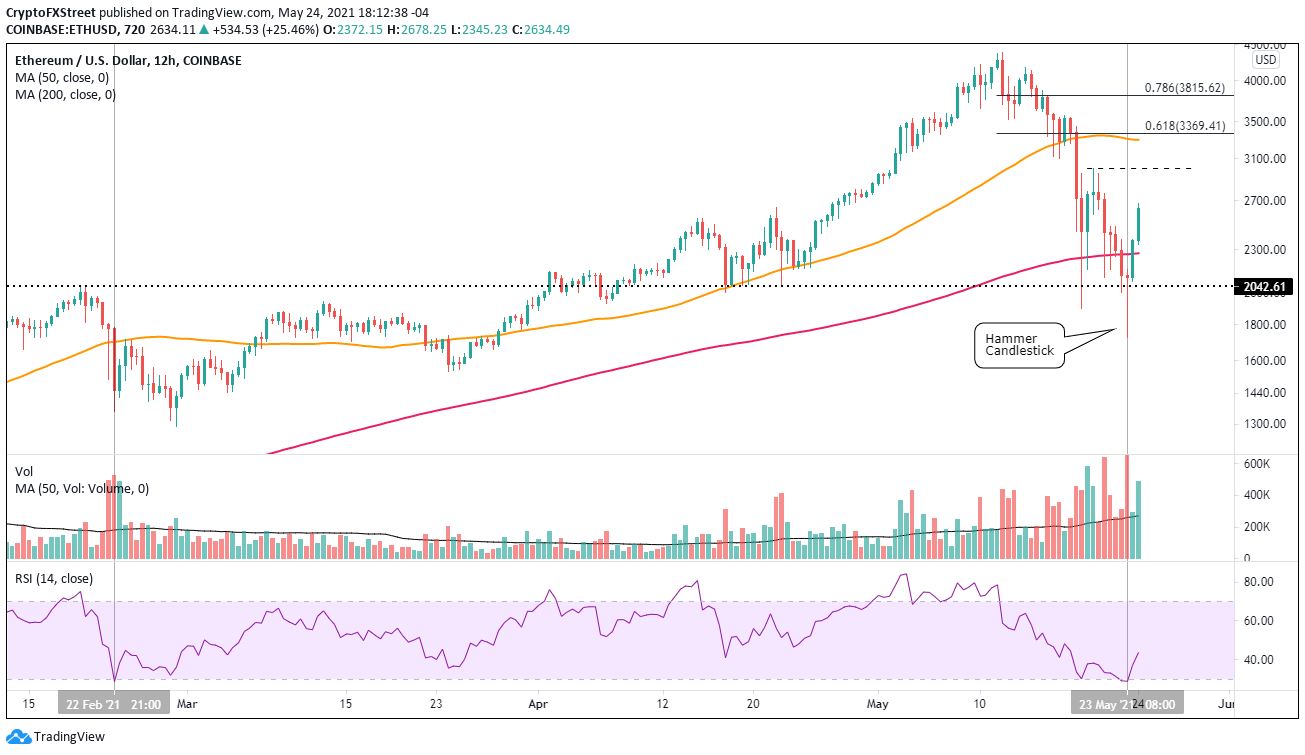 Another wave of selling and misfortune could drive Ethereum price back towards yesterday’s low, but the 200-day SMA would contain any additional weakness at $1,593. The current ETH outlook does not see that scenario emerging.

GBP/JPY Price Analysis: Stays on the bull’s radar around 154.00

Ethereum price closed Sunday with the largest weekly loss since 2016 at -41.44%. ETH triggers bullish hammer candlestick pattern on the 12-hour chart. Transition from "proof of work" to "proof of stake" highlights Ethereum's push to be more environmentally friendly. Ethereum price has catapulted almost 27% today after closing last week with the most significant weekly loss since trading began. At the time of writing, the 27% gain would be the largest one-day gain since December 12, 2017. There is a high probability that ETH has printed the correction low and has shifted to building a new base for a…