Latest
You are at:Home»EUR/USD Daily»EUR/USD Feb. 5 – Little Movement As PMIs Up, Retail

EUR/USD continues to look listless this week, showing little activity on Wednesday. Early in the European session, the pair is trading in the low-1.35 range. Eurozone releases were a mix on Wednesday. Service PMIs from Spain, Italy and the Eurozone were positive, as all three showed improvement in January. Eurozone Retail Sales was a big disappointment, posting a decline of 1.6%. In the US, there’s plenty of action, led by two key events – ADP Non-Farm Employment Change and ISM Non-Manufacturing PMI. 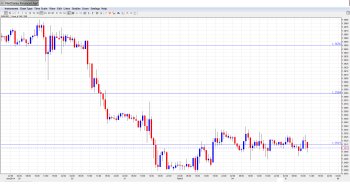