Euro-zone PMIs were  quite  mixed, but still pointed to some weak  growth,  despite the  already visible impact of the tensions with Russia on the economic zone. In the US, a  USD rally that commenced with  strong housing data  intensified with the  not-too-dovish FOMC minutes.  At Jackson Hole,  Yellen did not say anything new, and this allowed yet another fall in EUR/USD.  Is this divergence set to continue setting the tone?

EUR/USD daily graph  with support and resistance lines on it. Click to enlarge: 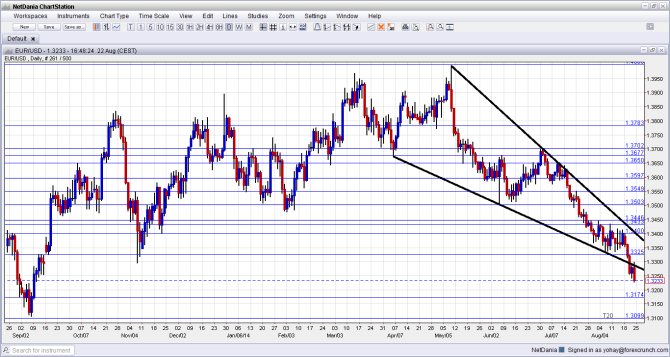 Euro/dollar  began the week with a failed attempt to move above resistance at 1.3415 (mentioned  last week), and from there the pair began a slide, eventually  losing the  downtrend support line.

We start from lower ground this time. 1.3650  worked as strong resistance during May and June but is weakening now.  1.3585  served as the bottom of the range and still carries weight despite the breakdown in June. 1.3550 worked as support in January  but is now weakening.

The round number of  1.35  worked as the last cushion in June and is strong also due to the roundness. 1.3450 worked as resistance in August 2013 and as support in September and October. It is now a key line on the upside.

Below, the round number of 1.31 served as resistance several times, and the all important figure below is 1.30.

As the thick black lines on the chart show, the pair broke below the  downtrend support and left the channel.  Downtrend resistance, that begins from the near 1.40 peak and was  mentioned here before is quite far from the line at the moment. Downtrend support accompanies the pair from May and was formed in  June.

I remain  bearish on  EUR/USD

While a correction could come after the big fall, it could be temporary. The dovish ECB and the  already  not-too-dovish Fed  gap is becoming more reflected in the lower value of EUR/USD, as  Mario Draghi explained us so well. Could we see a correction before the next move down? Perhaps, but this could be only temporary. A reminder of  weak inflation in the euro-zone  and of strong US growth could certainly shape the next fall.

If you are interested a different way of trading currencies, check out the  weekly binary options setups, including EUR/USD and more.

EUR/USD  suffered for yet another week, dropping to an 11 month low and dipping below long term downtrend support. What's next for the common currency? A key German survey and all important inflation figures are the highlights of this week.  Here is an outlook on the highlights of this week and an updated technical analysis for EUR/USD. Euro-zone PMIs were  quite  mixed, but still pointed to some weak  growth,  despite the  already visible impact of the tensions with Russia on the economic zone. In the US, a  USD rally that commenced with  strong housing data  intensified with the  not-too-dovish FOMC…