EUR/USD had a positive week, riding on the confident message from Mario Draghi and recapturing the broken uptrend support line. The ECB president will have another opportunity to rock markets now. In addition, industrial production and the all-important GDP figures are the highlights of this week. These are the main highlights for this week. Here is an outlook on the major events and an updated technical analysis for EUR/USD.

The ECB left all rates unchanged and president Mario Draghi gave a calm speech in which he provided an explanation for each inflation worry. Even though the ECB doesn’t really expect a change, it remains open to action, depending on data coming in March. PMI readings released earlier indicated modest improvement in January with positive Services PMIs from Spain Italy and the Eurozone  as well as solid figures in the manufacturing sectors but Eurozone Retail Sales disappointed by dropping 1.6%. In the US, the Non-Farm Payrolls report came short of expectations, but another drop in the unemployment rate with a big upgrade to past data left analysts skeptical that the taper train would derail. What is the next direction of the pair? Let’s start, 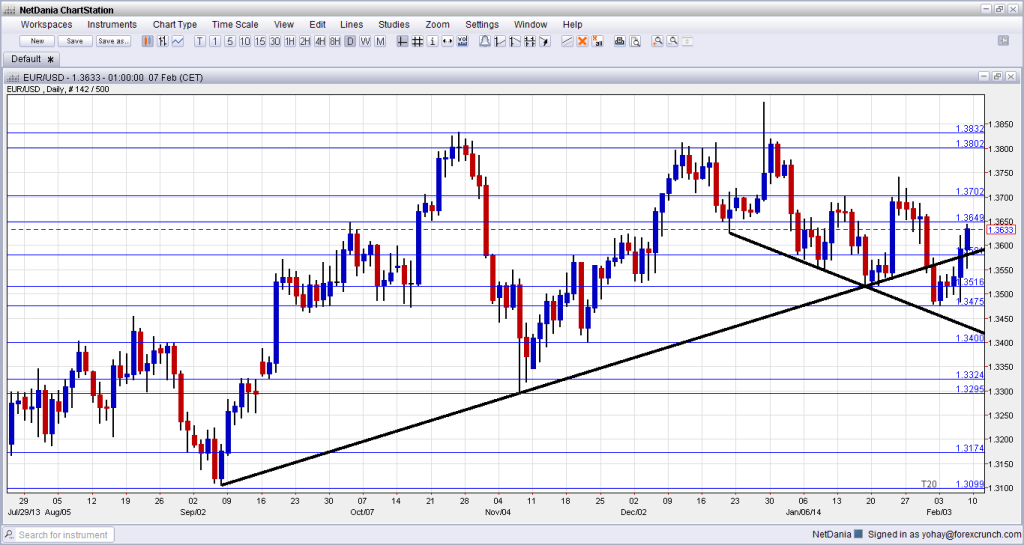 Euro/dollar started the week by trading on low ground, above support at 1.3470 (a line that joins our chart and didn’t appear last week). It then made a big breakout, eventually stopped just under the 1.3650 line to close at 1.3633.

1.38 is a round number and also worked as a temporary cap during that period of time and also in October 2013. Another round number, 1.37, is another resistance line after capping the pair in December.

1.3650 provided support in December and worked as resistance in September 2013, and is also a significant line. Also the February rally fell short of this line. Below, 1.3580 worked in both direction in the winter of 2013-14.

The round number of 1.34 worked as resistance several times in 2013, and is strengthening now. 1.3320 worked as a double top in early September and it was crossed only with a Sunday gap. It remains a clear separator of ranges.

1.3100 is worked as temporary resistance in December 2012 and is becoming more important once again, after capping a recovery attempt in June and then in July and providing support in September. Below, 1.3050 is minor support after holding the pair in August 2013.

A line beginning in the lows of early September that was connected to a line in November gave support to EUR/USD for some time, was broken in the previous week but now very nicely recaptured at the last minute. Is this a bullish sign?

Downtrend support that began in December and was formed in January is getting further away now.

Technically, the pair is stuck in the current trading range, and needs a serious trigger to break out. A big surprise in GDP or from Draghi are needed to make a move to the upside or to the downside, and this is not very likely.

While the door is still open to a negative deposit rate in March, only fresh inflation data can trigger expectations and this is not likely this week. In the US, the slowdown of job growth is certainly worrying, but the bigger picture has improved due to big revisions. This puzzling situation is not expected to move the taper train from its clear track. All in all, barring a really big surprise, range trading is probably the best option for this pair.

If you are interested a different way of trading currencies, check out the weekly binary options setups, including EUR/USD and more.