EUR/USD made a significant move downwards and is now at critical support, as a deal between Greece and the troika seems hard to achieve, and as the US enjoyed a positive jobs report. The ECB rate decision and another round of Eurogroup meetings are among the main market movers on our list. Here is an outlook on the highlights for this week and an updated technical analysis for EUR/USD.

Not only are the troika and Greece divided on labor reforms, but also from within: the IMF wants euro-zone governments to take a loss, and in Greece, the government is in a fragile situation. In addition, the required troika reforms could be unconstitutional. This could send the parties to the drawing board, as Greece will soon run out of money. In the US, Non-Farm Payrolls rose by 171K – more than expected. In addition, the rise in the participation rate and revisions also added to the good impression. This week, US voters go to the polls. The outcome will also have a significant impact on the markets. Will EUR/USD bounce or collapse? Fasten your  seat belts.

Updates: Spanish Unemployment Change looked terrible, climbing to 128.2 thousand. The estimate stood at 90.3K. Euro-zone Sentix Investor Confidence came in at a weak -18.8 points, slightly better than the market forecast. Spanish Services PMI rose slightly, to 41.2 points.  Italian Services PMI also improved, climbing to 46.0 points. Euro-zone Final Services PMI came in at 46.0 points, very close to the estimate of 46.2. German Factory Orders were a big disappointment, plunging by 3.3%. The markets had expected a modest drop of 0.3%. The markets will be closely attuned to the US presidential election results, with President Obama a slight favorite over Republican Mitt Romney. EUR/USD is choppy, and continues to test the 1.28 line. The pair was trading at 1.2794.  Obama is re-elected and the announcement is met with high volatility. EUR/USD rises to resistance at 1.2880 and then slides. The move downward accelerates on a warning by Draghi that Germany will enter a recession. The ECB left rates unchanged at a level of 0.75%. German Trade Balance came in at 17.0 billion, just below the  estimate of 17.2 billion. French Trade Balance improved, posting a deficit of 5.0 billion. This figure matched the market estimate. The ECB will hold a Press Conference later on Thursday. Euro-zone Retail Sales declined 0.2%, slightly  worse than  the estimate of 0.0%.  German data continues to point to an economy in trouble. Industrial Production slumped 1.8%, well below the estimate of -0.4%. The euro is steady after losing ground on Thursday morning. EUR/USD was trading at 1.2739. 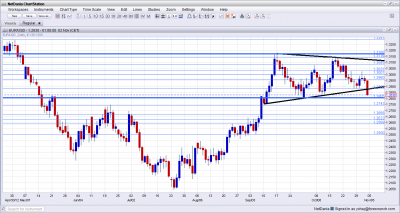 â‚¬/$ started the week trading above 1.2880 and along the uptrend support line (mentioned last week). It then moved higher and also temporarily flirted with the round 1.30 line, before beginning to descend. A late and strong fall sent the pair below uptrend support and all the way down to 1.2821 before closing at 1.2830.

1.3170 worked very well as a double top during September 2012 and is now the top frontier of the range. A failure to get closer to this line shows that the pair has limited momentum. 1.3140 was the high of October and is minor resistance before 1.3170.

1.3080 capped the pair in September and then again in October. 1.3030 provided some support at the same period of time. Both are minor in comparison with the next line.

The very round 1.30 line was a tough line of resistance for the September rally. In addition to being a round number, it also served as strong support. It recently worked as a battleground and the pair is now well below this line. It is closely followed by 1.2960 which provided some support at the beginning of the year and also in September and October – the line is weaker now.

1.2880 provided some support in October and now switches to resistance. 1.28 is the bottom border of the range, and it is close now. The pair fell to this low in September and later got close to it. A loss of this line will send the pair to a two month low.

EUR/USD broke below uptrend support late in the weak, and is more vulnerable now. Both downtrend resistance and uptrend support were formed early in September. This adds to the bearish sentiment, that could result in the loss of critical support rather than a bounce at this point.

The  failure of the EU Summit  regarding Spain was followed by a serious deterioration in Greece, just as the country seemed close to a deal.  Greece is on the brink, and time is running out towards a tentative deadline on November 16th, when Greece could run out of cash. With the new constitutional fears and the IMF suggestion that euro-zone government will take a loss, it seems that Greece and Germany are close to their limits. Will another can kicking  exercise be made in the last moment? Or will Greece leave the euro-zone “at the end of the autumn” as the head of the Eurogroup Jean-Claude Juncker hinted? Big moves could happen after the US elections, no matter who wins.

Regarding the US elections, a re-election of Obama (which got some positive NFP news) could boost the dollar on safe haven flows –  fears that it will be hard to resolve the fiscal cliff. A victory for Romney could weaken the dollar on risk appetite. There are additional scenarios.  See how to trade the US Presidential Elections with EUR/USD.

EUR/USD made a significant move downwards and is now at critical support, as a deal between Greece and the troika seems hard to achieve, and as the US enjoyed a positive jobs report. The ECB rate decision and another round of Eurogroup meetings are among the main market movers on our list. Here is an outlook on the highlights for this week and an updated technical analysis for EUR/USD.   Not only are the troika and Greece divided on labor reforms, but also from within: the IMF wants euro-zone governments to take a loss, and in Greece, the government is…