EUR/USD slid in range and lost the 1.30 line once again, as the debt crisis issues saw no progress, and as Germany looks weaker. President Draghi’s speech German retail sales and a meeting of the Eurogroup are the major events this week. Here is an outlook on the market-movers ahead.

Further EU weak data was released last week indicating a continued slowdown in the eurozone with lower than expected Flash PMI’s; Eurozone  Flash manufacturing PMI falls from 46.1 to 45.3, while services remained almost unchanged. The biggest worries surround Germany, that saw a significant drop in its manufacturing PMI to 45.7 and a drop in economic sentiment, as reported by IFO. Spain is still thinking what do regarding a bailout after mixed regional election results.  With Greece, the deal is not done yet. All the options are on the table after Germany’s finance minister cast doubt over Greece’s euro-zone membership.

Updates: ECB President Mario Draghi addressed a banking forum in Frankfurt. Spanish Flash GDP posted its fourth consecutive decline, posting a drop of 0.3%. This was a notch better than the estimate of -0.4%. Weak German data continues to alarm the markets. German Unemployment Claims jumped by 20 thousand, the highest level since June 2009.   Euro-zone Retail PMI fell in October, posting a reading of 45.3 points. The markets are waiting for the Italian 10-year Bond Auction later on Tuesday. The euro continues to edge higher, as EUR/USD was trading at 1.2950. The Italian 10-year Bond Auction was very successful, with yields falling to 4.92%. Germany finally posted some positive numbers, with Retail Sales jumping 1.5%. The estimate stood at 0.4%. French Consumer Spending rose a modest 0.1%, a notch below the forecast of 0.2%. The Italian Monthly Unemployment Rate came in at 10.8%, matching the forecast. European finance ministers met on Wednesday in Brussels, and reported good progress in talks between the troika and Greece. The French 10-y Bond Auction posted an average yield of 2.22%.Euro-zone CPI Flash Estimate rose 2.5%, matching the forecast. Euro-zone Unemployment Rate hit another dubious record, climbing to 11.6%. This was slightly above the estimate of 11.5%. Italian Preliminary CPI posted a flat 0.0%, below the estimate of 0.2%. The German 30-y Bond Auction posted a slightly higher yield, with an average of 2.34%. The euro has edged higher, as EUR/USD was trading at 1.2974. There are no Euro-zone releases scheduled on Thursday. 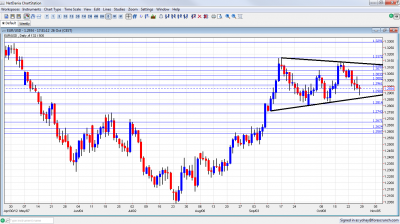 â‚¬/$ began the week with a failure to break above the 1.3075 line (mentioned last week). It then continued on a gradual path downwards, losing 1.30 and also temporarily dipping under 1.29.

We start from lower ground this time. The round level of 1.34 is a strong cap after serving as such during March. 1.3290 worked as resistance for the pair during April and is also of importance.

1.3170 worked very well as a double top during September 2012 and is now the top frontier. A failure to tackle this line shows that the pair has limited momentum. 1.3105 provided some support in April and is a rather weak line at the moment.

1.3075 worked as a nice separator in mid October and also in September. 1.3030 provided some support at the same period of time. Both are minor in comparison with the next line.

The very round 1.30 line was a tough line of resistance for the September rally. In addition to being a round number, it also served as strong support. It is now becoming more pivotal and a battleground. It is closely followed by 1.2960 which provided some support at the beginning of the year and also in September and October.

1.29 is a round number that also provided support when the euro was tumbling down back in May. It is weaker now. 1.2814 was the peak of a recovery attempt in May and also capped the pair in September 2012. A slide lower in October 2012 almost met this line.

Both downtrend resistance and uptrend support were formed early in September. Uptrend support is more significant, and the pair is getting close to this line.

The failure of the EU Summit was indeed felt in the value of the euro, but troubles are not over. Greece, where a deal seemed close, is not secure in the euro-zone after Wolfgang SchÃ¤uble, Germany’s finance minister, cast doubt on its membership. Is it a negotiation trick? Or have the Greeks reached their limits? Spain’s unemployment officially reached 25%, but as its funding needs are almost complete for the year, the government seems reluctant to ask for aid – a move the euro needs for a boost. And, the German locomotive has run out of steam as well, as forward looking data show.

In the US, things are getting slightly better, but as we’ve seen in the non event Fed decision, the big drama will probably wait for the elections, due in the following week.

EUR/USD slid in range and lost the 1.30 line once again, as the debt crisis issues saw no progress, and as Germany looks weaker. President Draghi's speech German retail sales and a meeting of the Eurogroup are the major events this week. Here is an outlook on the market-movers ahead. Further EU weak data was released last week indicating a continued slowdown in the eurozone with lower than expected Flash PMI's; Eurozone  Flash manufacturing PMI falls from 46.1 to 45.3, while services remained almost unchanged. The biggest worries surround Germany, that saw a significant drop in its manufacturing PMI to…