Euro/dollar  edged up on the last week of August, anticipating action from the ECB and also enjoying some dollar weakness. As volume and volatility return, the rate decision is the main event in a very busy week. Will Draghi turn strong words into action? A lot depends on Spain as well. Here is an outlook for the upcoming events and an updated technical analysis for EUR/USD.

In the US, Bernanke’s Jackson Hole speech had some dovish points such as calling the employment situation “grave” and justifying past QE. However, QE3 is far from certain and the Fed might opt for other types of monetary easing options on the next meeting. Expectations for a Spanish aid request rose after  Catalonia’s aid request, that added pressure on the central government. Without an aid request, the ECB will not buy. However, we may have to wait for the German constitutional court’s decision on September 12th for that to happen. Nevertheless, the busy calendar promises a lot of action before that.

Updates: Spanish Unemployment Change  pushed up 38.2 thousand, the first increase in five months. Euro-zone PPI rose 0.4%, above the estimate of 0.3%. The euro moved up after remarks by ECB head Draghi  at a closed meeting  were leaked,  providing some  details about the ECB’s bond buying plan, including an option to buy 3 year bonds – 3 years is also the length of the ECB’s LTRO. The euro has retreated, falling under the 1.26 line. EUR/USD was trading at 1.2594. German Services PMI slipped to 48.3 points, down sharply from 50.3 points last month. Spanish Services PMI came in at 44.0 points. Italian Services PMI posted a reading of 44.0 points, beating the forecast of 43.3 points. Euro-zone Final Services PMI disappointed, with a figure of 42.7 points. The market estimate stood at 42.7 points. Euro-zone Retail Sales declined by 0.2%, matching the forecast. It was the first drop for the indicator since June. The German 10-year Bond Auction disappointed, as only 3.61 billion euros were snapped  up  out of the 5 billion  euros  up  for sale.  The  yield was unchanged at 1.42%.  The euro has recovered and pushed  upwards, as EUR/USD was trading at 1.2555. The ECB will announce its key interest rate level on Thursday. As expected by most analysts, the ECB held its key interest rate at 0.75%, and the euro has responded by moving higher. Euro-zone Revised GDP declined by 0.2%, matching the market forecast.The French 10-year Bond Auction posted a yield of 2.21%, down from  the  previous  yield of 2.53%. The markets received a dose of  positive news from German Factory Orders,which were up 0.5%, beating the forecast of 0.3%. The markets will be waiting for the release of details of the ECB bond-buying proposal. The ECB will be hosting a press conference later on Thursday, and ECB President Mario Draghi will deliver remarks in Potsdam, Germany. The euro is climbing, as EUR/USD was trading at 1.2642. 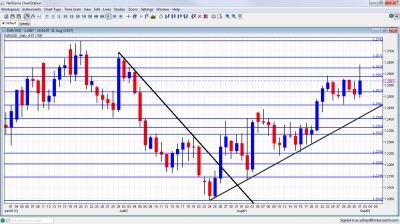 â‚¬/$ traded in a relatively narrow range throughout most of the week, falling short of the 1.2587 line it challenged last time, and at times held above the 1.2520 line (mentioned last week). Later on, the pair fell a bit lower only to make a sharp rise and challenge the 1.2624 line before retreating.

1.2624 is the previous 2012 low and remains important as also seen at the end of August, when it served as resistance. Below, 1.2587 is a clear bottom on the weekly charts but after holding the pair down for a while, it was eventually run through.

1.2520 had an important role in holding the pair during June, in more than one case, and it became stronger in August. 1.2460 is the next minor line of support after providing a cushion for the pair in August.

An uptrend support line can be seen on the chart. After bouncing off the line last time, the line slowly got closer to the pair that remained stable in range.

With tensions rising within the ECB, we might get more details from Draghi but action, including a Spanish request, will probably all wait for after the German constitutional court approves the ESM bailout fund. Data from Europe remains generally weak.

In the US, we could get more positive signs from the job market, lowering expectations for QE3. Without a threat of recession, it’s hard to see more QE. The picture might all change in the following week, but for now, there’s more on the downside in a week packed with many moving parts. 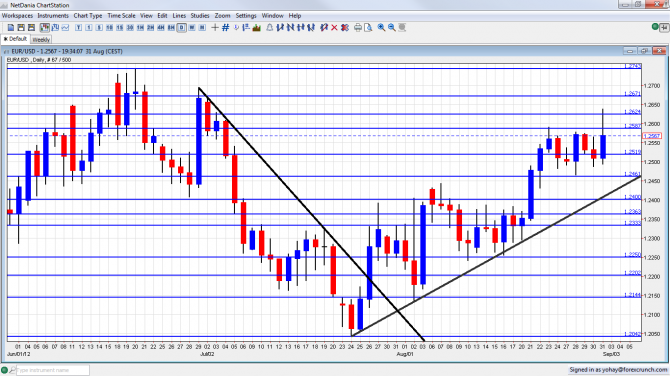 Euro/dollar  edged up on the last week of August, anticipating action from the ECB and also enjoying some dollar weakness. As volume and volatility return, the rate decision is the main event in a very busy week. Will Draghi turn strong words into action? A lot depends on Spain as well. Here is an outlook for the upcoming events and an updated technical analysis for EUR/USD.     In the US, Bernanke's Jackson Hole speech had some dovish points such as calling the employment situation "grave" and justifying past QE. However, QE3 is far from certain and the Fed might…