Euro/dollar  made impressive gains as the prospects for a Spanish solution rose once again. Can we expect a surge now? Or will optimism prevail?  A major German survey and an important Italian bond auction among other events will close the month, as eyes remain on Spain and also on Greece. Here is an outlook for the upcoming events and an updated technical analysis for EUR/USD.

Optimism began with a report about potential details of ECB bond buys and significantly strengthened as one German ECB member, Asmussen, backed the ECB’s bond buying ideas. As he is close to Merkel, this is practically a German approval. The result was a surge in the euro. Adding reports about negotiations between Spain and its euro peers regarding a solution and the new hopes of QE3 in the US, and you get a huge rally that woke markets.

Updates: The euro got a boost from a positive GfK German Consumer Climate release. The key indicator posted a reading of 5.9 points, beating the market forecast of 5.8 points. Euro-zone M3 Money Supply looked sharp, climbing 3.8%, as it easily exceeded the estimate of 3.3%. Euro-zone Private Loans were up 0.1%,  above the forecast of a 0.1% decline. EUR/USD was trading at 1.2547. German Preliminary CPI will be released throughout Wednesday. Italian Retail Sales surprised the markets, posting a modest gain of +0.4%. The market estimate stood at -0.1%. ECB head Mario Draghi is a surprise no-show for the Jackson Hole meeting of central bankers, citing a “heavy work schedule“. EUR/USD is trading in a narrow range, as the pair was trading at 1.2558. German Unemployment Change disappointed, as the unemployment rolls swelled by an additional 9,000 people. The markets had forecast a gain of 7K. Euro-zone Retail PMI dropped, posting a reading of 44.4 points. The markets cheered the Italian 10-year Bond Auction, which saw yields drop to 5.82%, down from July’s 5.96%. The markets are eagerly awaiting remarks from Fed Chair Bernanke in Jackson Hole on Friday, as speculation about QE continues. The euro continues to be rangebound against the dollar, as EUR/USD was trading at 1.2546. 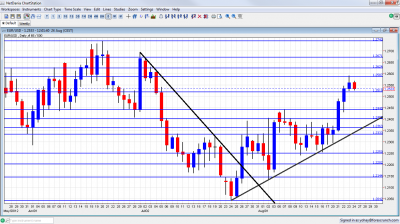 â‚¬/$ started the week with capped under the 1.2360 line (mentioned last week), before bouncing off uptrend support and making big gains. It first settled under 1.2440 before surging higher. 1.2587 provided a strong cap.

An uptrend support line can be seen on the graph. Another slide towards this line provided an excellent test. The pair is now far from this line, but it could be tested on a new fall.

I turn bullish to neutral on EUR/USD

After the big gains, there is some room for correction, especially as worries about Greece (which doesn’t rule out selling islands) weigh on the euro. On the other hand, optimism about Spain will likely prevail and a formal Spanish request could trigger a rally.

In the US, expectations are higher for QE3, but there are many reasons to doubt that this will be the outcome for September’s meeting. Just before markets close on Friday, Ben Bernanke could pour a lot of cold water on these expectations and strengthen the greenback, balancing ans Spanish optimism.

Euro/dollar  made impressive gains as the prospects for a Spanish solution rose once again. Can we expect a surge now? Or will optimism prevail?  A major German survey and an important Italian bond auction among other events will close the month, as eyes remain on Spain and also on Greece. Here is an outlook for the upcoming events and an updated technical analysis for EUR/USD.     Optimism began with a report about potential details of ECB bond buys and significantly strengthened as one German ECB member, Asmussen, backed the ECB's bond buying ideas. As he is close to Merkel,…