Euro/dollar  remains in range, as fears on both sides of the pond increased but remained balanced. With the narrowing channel closing on the pair, perhaps we will see a breakout . The main event of this busy week is the rate decision by the ECB, which will come after inflation and employment figures. Here is an outlook for the upcoming events and an updated technical analysis for EUR/USD.

The spotlight on Spain becomes stronger: S&P cut their credit rating and almost every 1 in 4 Spaniards is unemployed.  Purchasing managers’ indices have shown that the situation is serious in Europe, as have other indicators across the continent. US economic indicators have been worrying as well, but but the general picture is not bad enough for QE3.

Updates: The trading week started off with a host of economic releases. German Retail Sales climbed 0.8%, exactly as predicted. M3 Money Supply beat the market forecast as it posted an increase of 3.2%. The figure represents the best reading since July 2009. Private Loans increased by 0.6%, lower than the market prediction of 0.8%. Euro-zone CPI Flash Estimate came in at 2.6%, a notch above the market forecast of 2.5%.   Italian Prelim CPI  exceedeed the market forecast of 0.3%, posting an increase of 0.5%. EUR/USD is steady in the European session, trading at 1.3222. The euro moved higher following the weak US PMI release on Monday. EUR/USD is trading at 1.3254. May 1 is a national holiday in Germany, France and Italy, so the US will take center stage, with four releases later in the day, including Manufacturing PMI. The Euro has lost almost a full cent, tumbling on the poor employment releases out of the Euro-zone on Wednesday. A strong PMI reading in the US also contributed to the fall. German Unemployment Change showed an increase of  19K, much worse than the forecast of -9K. The Italian Unemployment Monthly Rate also was weak, coming in at 9.8%. Estimates stood at 9.3%. After these gloomy figures, the markets breathed a  slight sigh of relief at the Euro-zone Unemployment Rate, which posted a reading of 10.9%,   matching the market forecast. The Euro-zone Final Manufacturing PMI was also very close to the market forecast, with a reading of 45.9 points. Traders shouldn’t  expect any break in the action, as US Unemployment Claims, a key indicator, will be released on Thursday. Also on Thursday, the ECB will set the interest rate level. The markets are not expecting any change to the current level of 1.0%. French 10-y Bond Auction  released figures of  2.96\2.0. Euro-zone PPI came in at 0.5%, slightly below the market forecast of 0.6%. All eyes are on the ECB interest rate announcement, followed   by a press conference. EUR/USD has steadied after yesterday’s tumble, and was trading at 1.3136. 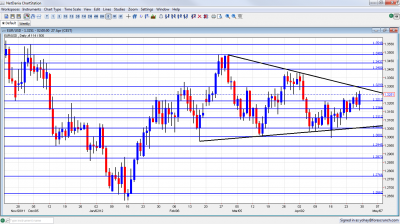 â‚¬/$ kicked off the week with a first failed attempt to cross the 1.3212 line (mentioned  last week). It hen fell to around 1.3110 before climbing again and challenging uptrend resistance, which wasn’t broken, despite a move higher and the close at 1.3250.

1.3212 held the pair from falling and switched to resistance later on. It proved itself as resistance once again in April 2012.  This was the bottom border of tight range trading in February. It is now pivotal as a support line.  1.3165 is now of higher importance. The line provided some support in December 2011 and worked as resistance in April 2012. It is stronger once again

As you can see in the chart above, the trading range of the pair is narrowing down. Both lines began in February, with uptrend support being more significant than downtrend resistance. A breach below this line was very temporary in its nature, and an attempt to break above downtrend resistance failed, making the line even stronger now.

Spain is in deeper trouble, suffering a toxic mix of economic troubles. Other euro-zone countries aren’t doing better, as PMIs and other indicators show. Tension remains high towards elections in Greece and France next week, with the projected results not too favorable for the euro.

In the US, things aren’t looking that good either, but the economy is still growing and not close to a recession. With persistent inflation (also acknowledged by the Fed), the chances of QE3 remain low. Even Bill Gross gave up on hopes for more dollar printing.

Euro/dollar  remains in range, as fears on both sides of the pond increased but remained balanced. With the narrowing channel closing on the pair, perhaps we will see a breakout . The main event of this busy week is the rate decision by the ECB, which will come after inflation and employment figures. Here is an outlook for the upcoming events and an updated technical analysis for EUR/USD. The spotlight on Spain becomes stronger: S&P cut their credit rating and almost every 1 in 4 Spaniards is unemployed.  Purchasing managers' indices have shown that the situation is serious in Europe,…