Euro/dollar  eventually climbed in the wide range, as positive German data and US weakness countered worries about Spain. The upcoming week will provide a forward looking view of the economy via the PMIs and a test of the debt crisis with an Italian bond auction among other events.  Here is an outlook for the upcoming events and an updated technical analysis for EUR/USD.

German surveys have been upbeat, while Spain and Italy continue struggling in finding a path for growth while lowering the debt. Will the north pull the south forward, or will the south drag the north down? In the US, A second week in a row of high jobless claims  cast serious worries that the slowdown isn’t so temporary. We will see what policymakers think about it.

Updates: EUR/USD gaps lower at the open as the first round of French presidential elections leaves a lot of room for uncertainty.  Socialist challenger Francois Holland did quite well, and he has called for a renegotiation of the Euro-zone fiscal agreement, in order to encourage growth. Monday morning started with a host of releases today out of the Euro-zone, France and Germany, with many falling below the market forecast. French Flash Manufacturing PMI came in at 47.3, exactly as predicted. However, both the German and Euro-zone Flash Manufacturing PMI were below the market prediction. Euro-zone Flash Services PMI posted a reading of 47.9, slightly below the market forecast. German Flash Services PMI came in at 52.6  almost matching the market forecast.  French Flash Services PMI was the biggest disappointment, as it dropped to a six-month low. The index came in at  46.4, well below the market forecast of 50.3.   EUR/USD continues to slide, trading at 1.3137.   Euro-zone Industrial New Orders  were a major disappointment,  posting a reading of -1.3%. The markets had predicted a rise of 1.4%. The Dutch government handed in its resignation on Monday, after failing to reach agreement on a budget to bring its deficit within EU limits. The election could be a referendum on the Netherland’s relationship with Europe, and put further strain on the Euro. In the short-term, the political uncertainty threatens to undermine the Netherland’s AAA rating.  ECB President spoke before the European Parliament earlier today. German 30-y Bond Auction released figures of 2.41|1.1, compared to last month’s reading of 2.62|2.1. Government auctions in Spain and Italy are worrying the markets, due to the very high borrowing costs these two countries are now facing. EUR/USD continues to test the 1.32 level, trading at 1.3202. Following the announcement by the Federal Reserve to maintain very low interest rates for the foreseeable future, and weak US Core Durable Goods, the euro moved higher against the dollar early  on Thursday.  However, the pair has since given up most  those gains, and is trading at 1.3214. We could see some movement by EUR/USD after the release of two key releases in the US on Thursday- Unemployment Claims and Pending Home Sales. 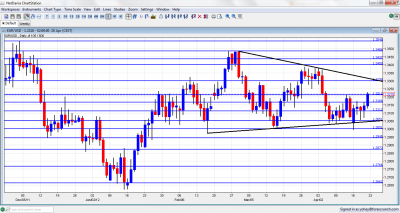 â‚¬/$ started the week with a negative tone: the pair dipped under the round line of 1.30 (mentioned  last week), but didn’t get too far. Also the break under uptrend support proved very short lived. It then changed course, hitting the 1.3165 line twice before a third attempt succeeded. The pair closed at 1.3218, just above the 1.3212 line. This break isn’t confirmed yet.

1.3212 held the pair from falling and switched to resistance later on. It proved itself as resistance once again in April 2012.  This was the bottom border of tight range trading in February. It is now pivotal.  1.3165 is now of higher importance. The line provided some support in December 2011 and worked as resistance in April 2012. It is a bit weaker now.

As you can see in the chart above, the trading range of the pair is narrowing down. Both lines began in February, with uptrend support being more significant than downtrend resistance. A breach below this line was very temporary in its nature, and eventually the pair is back in the middle of the range.

While Germany’s economy seems strong once again, the crisis in Europe’s larger peripheral countries is far from resolution. The PMIs will likely provide a stark reminder. Also the French presidential elections may weigh on the euro, as power within the continent shifts.

The pair is now in the middle of the wide 1.30 – 1.34 that characterized it in the past month, and also in the middle of the channel. It has more chances of falling within the range than rising also without any disasters in Europe. High hopes for QE3 hints in the US will likely be met with a disappointment, and not for the first time.

GBP/USD: Back To Bullish Mode Above 1.6 (Elliott Wave)

Euro/dollar  eventually climbed in the wide range, as positive German data and US weakness countered worries about Spain. The upcoming week will provide a forward looking view of the economy via the PMIs and a test of the debt crisis with an Italian bond auction among other events.  Here is an outlook for the upcoming events and an updated technical analysis for EUR/USD. German surveys have been upbeat, while Spain and Italy continue struggling in finding a path for growth while lowering the debt. Will the north pull the south forward, or will the south drag the north down? In…