Euro/dollar   finally broke out and made a very impressive rally, rising more than 300 pips. The second Greek bailout was agreed upon, and the euro shrugged off the long list of doubts. Has the euro turned a page, or is this a rise before the fall?  The highlight of the upcoming week is the second LTRO by the ECB, in which banks will get more money. Here is an outlook for the upcoming events and an updated technical analysis for EUR/USD.

Greece still needs to pass 38 demands by the troika until the end of February. That’s Wednesday. The Greek parliament was quicker with igniting the bond swap. Regarding this, the haircut for private bondholders requires 66% of volunteers. Will they be found when they’ll get only 26%-27% of their money, and some have insurance against a default? These are the two major hurdles. Let’s see the events. The past week’s German indicators were good.

Updates: EUR/USD is still above 1.34, but the pair is slipping from the highs reached last week. The G-20 meeting in Mexico has not provided any concrete resolutions, and   IMF funding for the Greek bailout is still up in the air.  S&P downgraded Greece to Selective Default, but this was shrugged off by the markets. German finance minister showed Greece the door, and another hit came from the Irish announcement of a referendum for the recent treaty changes. EUR/USD is slipping under 1.34 once again, after regaining it earlier. See how to trade the US GDP with EUR/USD. EUR/USD has moved upwards,  trading at  1.3440. The pair could react to the second LTRO of the ECB and Fed Chairman Bernanke’s testimony. The euro dropped sharply to 1.3320 after Fed Chairman Bernanke’s testimony. 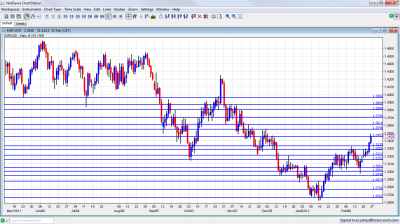 Euro/dollar began the week with more range trading between the 1.3212 and 1.3280 lines mentioned last week. It then broke higher, and after a temporary stop under 1.3333, it surged forward and ends the week around the 1.3450 line. The pair certainly deserves its high location in the list of most predictable currencies.

In case the rally continues in a stronger manner, we’ll start from a very high point: 1.3960. This was resistance in October 2011, as well as support more than once beforehand. 1.3868 served as resistance at during October and November, and is the next line of resistance.

1.38, that stopped the pair in September and also later on is weak and now not so distant resistance. 1.37 had a similar role at the same time and also worked as support afterwards. It is stronger resistance.

1.3450 was support in November. It is now a minor line of struggle, as seen recently. 1.3333 provided some support for the pair during December 2011 and is a stronger line now after being very distinct.

Quite close by, 1.3280 had a similar role at the same time, but is weakening once again after working only in a temporary manner.  1.3212 held the pair from falling and switched to resistance later on. It is now support, after working as resistance more than once in February 2012.

1.3150 is the updated version of the 1.3145 line, after the recent choppiness. The lowest point recorded in October 2011, is now a pivotal line in the middle of the range. 1.3050 is the updated version of 1.3060, which was the top border of a very narrow range that characterized the pair towards the end of 2011. It is now serious support on the downside after serving as the bottom border of the range and despite a temporary move under this line.

The round number of 1.30 is psychologically important but is much weaker now. It was a pivotal line before Bernanke’s rally.  The 1.2945 line is stronger once again and still provides support.

1.2873 is the previous 2011 low set in January, and it returns to support once again. This is a very strong line separating ranges.  1.2760 is a pivotal line in the middle of a recent range. It provided support early in the year.

Despite the huge rally, I remain bearish on EUR/USD

There are too many reasons to doubt the chances that the Greek bailout will see light: the timetable for passing 38 reforms, the unknown contribution of the IMF, the German refusal to add more funds, the uncertainty of the bond swap and lots more. It also seems that the creditors, and especially Germany, just want the deal to fail. After the banks get the necessary cash in the LTRO, all hell could go loose. Full details are available in the special report. Join the newsletter to download it.

On the other side of the Atlantic, things are OK. Ben Bernanke might be soft, but the chances of QE3 in March remain low.

Euro/dollar   finally broke out and made a very impressive rally, rising more than 300 pips. The second Greek bailout was agreed upon, and the euro shrugged off the long list of doubts. Has the euro turned a page, or is this a rise before the fall?  The highlight of the upcoming week is the second LTRO by the ECB, in which banks will get more money. Here is an outlook for the upcoming events and an updated technical analysis for EUR/USD. Greece still needs to pass 38 demands by the troika until the end of February. That's Wednesday. The…