After the recent rally, a busy week expects Euro/Dollar traders. Apart from many important indicators, Friday’s stress tests are critical for the Euro. Here’s an outlook for the European events and an updated technical analysis for EUR/USD, now in higher ground. 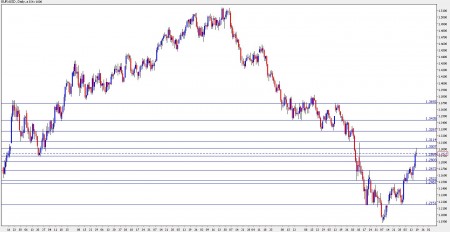 The Euro continued riding on the greenback’s weakness in the past week, and disregarded a credit downgrade for Portugal. Currently, German strength holds the Euro-zone. Will this continue? Let’s start:

Euro/Dollar continued struggling with the 1.2672 line at the beginning of the week. It later made a convincing break above this line and then continued above 1.28 (a new line that didn’t appear on last week’s outlook) and managed to cross 1.2880 before closing at 1.2927.

Looking up, a significant line of resistance appears at 1.3110. EUR/USD was supported on this line before it collapsed, and found resistance at that point after the collapse.

Lower, 1.2520 is a minor line of support, followed by the stronger 1.2460 which held the pair before the recent rally.

The significant lines below are 1.2150, which was a clear line in both directions and 1.20.

The convincing break of 1.2670 and the worsening conditions in the US send the Euro up. While the situation in Europe hasn’t significantly improved, these rises cannot be ignored. The stress tests results on Friday will be very important for the debt crisis and the Euro. I think that the pair will trade in a range till then.

This pair receives excellent reviews on the web. Here are my favorites:

After the recent rally, a busy week expects Euro/Dollar traders. Apart from many important indicators, Friday's stress tests are critical for the Euro. Here's an outlook for the European events and an updated technical analysis for EUR/USD, now in higher ground. EUR/USD daily chart with support and resistance lines marked. Click to enlarge: The Euro continued riding on the greenback's weakness in the past week, and disregarded a credit downgrade for Portugal. Currently, German strength holds the Euro-zone. Will this continue? Let's start: Current Account: Published on Monday at 8:00 GMT.  The difference in value between money transfers, services and…