The German ZEW Economic Sentiment is the major European event this week. Will it end the Euro rally? Here’s an outlook for the European events and an updated technical analysis for EUR/USD. 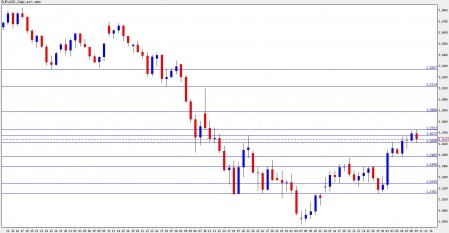 Riding on weak economic data from the US, EUR/USD edged up to new highs. The big question is if it’s sustainable. We didn’t get many headlines about the debt crisis recently, so the indicators have a bigger role. Let’s start:

The Euro gradually went up during the week, but struggled to make a convincing break above 1.2670. It did reach 1.2720 (a new line that was added on last week’s outlook), but eventually closed at 1.2670.

Looking up above the past week’s peak of 1.2720, EUR/USD will find last year’s line of support at 1.2880 as its next resistance line. Above, 1.3110 was a strong support line before the collapse of the pair, and now provides resistance.

The next support line that now turned into a resistance line is 1.3267, still far away for now.

Looking down, 1.2608 serves as an immediate line of support after working well in the past week. It’s followed by 1.2480, which is already a strong line of support.

Below, 1.2395 is the next minor support line, working temporarily as a resistance line in mid June. Lower, 1.2250 worked as a support line and is still relevant.

The strongest support line is 1.2150. This worked as a support line before the Euro collapsed under 1.20, and serving as the bouncing spot before the recent rally. A drop below this line will open the road to a collapse.

I return to the bearish sentiment on the Euro.

EUR/USD made a strong correction, and is leaning towards the bottom of the uptrend channel. The debt issues in Europe are far from over, and American figures should show the difference once again, resuming the downtrend.

If you like this article,please vote for it on Forex Factory.

This pair receives many great reviews on the web. Here are my picks:

The German ZEW Economic Sentiment is the major European event this week. Will it end the Euro rally? Here's an outlook for the European events and an updated technical analysis for EUR/USD. EUR/USD daily chart with support and resistance lines. Click to enlarge: Riding on weak economic data from the US, EUR/USD edged up to new highs. The big question is if it's sustainable. We didn't get many headlines about the debt crisis recently, so the indicators have a bigger role. Let's start: German ZEW Economic Sentiment: Published on Tuesday at 9:00 GMT. This major survey has a history of…