Euro/dollar  closed the month with a bang, rising from the abyss to high levels as hope from the EU Summit took over any doubts. Are we set for more gains? Or will the rally fade out as in past summits. The rate decision is the main event of this week. Will the ECB finally cut rates?Here is an outlook for the upcoming events and an updated technical analysis for EUR/USD.

Germany finally made concessions and agreed to direct buying of bonds and injecting capital into banks. This comes with quite a few conditions, and some details are still lacking. Despite some obvious holes, this rally was stronger and lasted more time than the post Spanish bailout and post Greek elections rallies. The ball now moves to Draghi’s court: he can contribute to the rally, or pour cold water on it. We will also get to see how bond markets react to Spain’s improved bailout conditions.

Updates: Italian Manufacturing PMI came in at 44.6  points, matching the market forecast. Euro-zone Final Manufacturing PMI posted a reading of 45.1, slightly above the estimate of 44.8 points. Italian Monthly Unemployment Rate dropped down a notch to 10.1%, beating the forecast of 10.4%. The Euro-zone unemployment rate  hit a record in May, climbing to 11.1%. It was the highest level since the euro was introduced in 1999. Spain’s weak housing sector received more bad news, as house prices declined by 2.8% in Q2. Euro-zone PPI fell by 0.5%, well below the market forecast of a 0.2% decline. There is talk of  the ECB announcing a rate cut to help stimulate the struggling euro-zone economies. The markets are predicting that the central bank will  lower the present rate of 1.0%  to 0.75%.  EUR/USD is testing the 1.26 line, as the pair was trading at 1.2590. Italian Services PMI came in at 43.1 points, slightly above the market forecast of 42.6 points. The index has been below the 50 point level for over a year, indicating sustained contraction in the Italian service sector. Euro-zone Final Services PMI  also posted a reading slightly better than the market forecast. The index posted a reading of 47.1 points, just above the estimate of 46.8 points. Euro-zone Retail Sales  had a strong performance, posting  a 0.6% increase. This was  well above the market  forecast of 0.2%. Euro-zone Final GDP, a quarterly release, came in at a flat 0.0%, matching the market prediction. The US markets are closed for the Fourth of July holiday. The markets are anxiously awaiting the ECB interest rate announcement on Thursday. Most analysts are predicting a 0.25% cut, but some analysts are saying that the ECB could slash rates by 0.50%. EUR/USD has edged downwards on the market uncertainty, as the pair was trading at 1.2570. For those looking for some market movement, Thursday certainly did not disappoint. The  ECB  did indeed cut the benchmark interest rate, from 1.0%  to 0.75%. The deposit rate of 0.25%  was eliminated, as it was lowered to 0.0%  . This represents a historic new low for the ECB interest rate level. The rate announcement will be followed by a press conference with ECB head Mario Dragahi. The euro has slumped on the news, and was trading at 1.2432. The Spanish government auction of 10 year bonds raised EUR 3 billion, but the average yield climbed to 6.43%. This was higher than last’s month yield of 6.04%. The French treasury’s auction of 10 year bonds fetched an average yield of 2.53%. German Factory Orders posted a 0.6% gain, easily exceeding the market forecast of 0.1%. This was particularly good news after a recent host of weak data out of Germany. 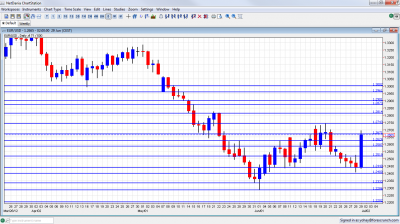 â‚¬/$ quickly lost the 1.2520 line (mentioned last week) and dropped further down, unable to reconquer this line. After grinding lower, the picture dramatically changed on Friday with a huge leap. The pair eventually closed at 1.2665.

The round number of 1.30 was a tough line as support, and pro-bailout victory in Greece could challenge this line. 1.2960 is close by, after providing some support before the bigger fall.

1.2750 capped the pair after the Greek elections and also had a similar role in the past. It is now of higher importance. 1.2670 was a double bottom during January and was the high line of the recovery before the Greek elections in June. This will be a pivotal line at the beginning of the week.

1.2520 had an important role in holding the pair during June, in more than one case, and it is key support now. 1.2440 provided support for the pair at the same time. and worked as double bottom.

The relatively surprising outcome of the EU Summit is a good step forward and seems to have a stronger effect. Mario Draghi has a chance to contribute to stabilization with the rate cut and perhaps more steps, after he got action from the governments. However, the decision is full of flaws and the implementations is till to be seen. Markets might begin doubting the results and seeing through the holes before things really stabilize. All in all, the bears and bulls might be balanced at these levels. A break above 1.2750 will be bullish.

In the US, the housing sector continues to shine while all the rest are dragging along. The Non-Farm Payrolls could boost the dollar on Friday, as it will probably not be bad enough for QE3, and not good enough to boost risk appetite.

Euro/dollar  closed the month with a bang, rising from the abyss to high levels as hope from the EU Summit took over any doubts. Are we set for more gains? Or will the rally fade out as in past summits. The rate decision is the main event of this week. Will the ECB finally cut rates?Here is an outlook for the upcoming events and an updated technical analysis for EUR/USD. Germany finally made concessions and agreed to direct buying of bonds and injecting capital into banks. This comes with quite a few conditions, and some details are still lacking. Despite…