Euro/dollar  reached out to new highs after the Greek elections but couldn’t hold on to them, eventually ending lower.  The EU summit is the main event of a busy week, and hopes are high. Will we see another disappointment that will send the pair lower? Here is an outlook for the upcoming events and an updated technical analysis for EUR/USD.

Spanish yields made new records and they stabilized thanks to refreshing German flexibility: the EFSF bailout fund will be able to buy bonds directly. The exact manner of how this will work is still to be seen. Spanish stability is also critical for Italy. Greece managed step back from the headlines after pro-bailout parties won the elections and formed a new government. However, Greece is far from meeting the targets, and a renegotiation of the terms may lead to a third bailout, if not the dreaded Grexit. Europe is not alone in its troubles: also the US economy is struggling and no magic QE3 is in sight.

Updates: The euro dropped as the markets are in a gloomy mood to start the trading week. Spain has formally submitted a request for aid, and the data out of Germany and Italy has  been weak.  Both countries will release data on Tuesday.  An EU Summit will take place at the end of the week, but expectations are very low for any breakthroughs.  EUR/USD continues to sag, and was trading at 1.2484. German Consumer Climate posted a reading of +5.8 points, slightly above the market forecast. This was welcome news, as it brought to an end a string of  weak  German releases in recent weeks. Italian Retail Sales declined by 1.6%, well below the market forecast of -0.6%.  There were government bond auctions in Spain and  Italy on Tuesday. In  Spain,  the government  sold about  EUR 3  billion  worth of three and  six-month debt instruments. The yields for both were well above the May figures. Following the auction, the yield on Spanish 10-year bonds climbed to 6.71%.  In Italy, the government auctioned off about EUR  3  billion worth of two-year bonds. The yield of 4.71% was the highest since December. The Spanish banking sector continues to concern the markets. In the latest development, the Moody’s ratings agency has downgraded 28 Spanish banks. The euro continues to struggle, and has again dropped below the 1.25 line. The pair was trading at 1.2479. German data again disappointed, as Import Prices contracted 0.7%, a bit lower than the market estimate of a 0.6% drop. The markets will  be hoping for better news from the German Prelim CPI, which will be released later on Wednesday. The euro continued to trade in a narrow range, as the markets await for the EU Summit, which begins Thursday in Brussels. There is skepticism that the meeting will deliver  any concrete results. In Spain, the yield on 10-year bonds were again on the rise, pushing up to 6.87%. Meanwhile, the government has passed a new law limiting cash transactions, which  is unlikely to  enhance the embattled government’s popularity. EUR/USD has edged downwards, and was trading at 1.2488. The EU Economic Summit takes place on Thursday and Friday, but the markets are not expecting any tangible progress. The euro was down sharply as a result. German data continued to disappoint the markets, as employment figures were released on Thursday. The number of unemployed people rose by seven thousand, exceeding the estimate of five thousand. The unemployment rate came in at 6.8%, above the 6.7% forecast. German Prelim CPI contracted by 0.1%, while the markets had predicted no change in this month’s reading. Euro-zone Retail PMI came in at 48.3 points, indicating continued contraction in the retail industry. Italian Preliminary CPI rose 0.2%, matching the market forecast. Also in Italy, a 10-y bond auction took place, with an average yield of 6.19%. 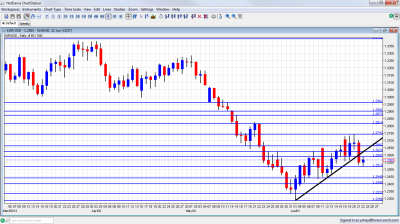 â‚¬/$ kicked off the week with a nice weekend gap and hit a new level of 1.2748. This later became a stubborn line of resistance. After the Greek euphoria passed, the pair fell under 1.26 and made another attempt to break higher. After this failed, it found support at 1.2520 before closing at 1.2565.

Note that some lines have changed since last week. The round number of 1.30 was a tough line as support, and pro-bailout victory in Greece could challenge this line. 1.2960 is close by, after providing some support before the bigger fall.

1.2520 had an important role in holding the pair during June, in more than one case, and it is key support now. 1.2440 provided support for the pair at the same time.

As the graph shows, the pair traded alongside an uptrend channel. This has been broken now. It should be noticed in addition to the regular lines.

High hopes towards the EU summit may underpin the pair at first. Given the past, there is a high chance of disappointment. Nothing has been solved in Spain – the assessment about the funding needs of banks are probably short of mark and will be revised higher. Italy’s pro-reform government is unstable of late and will find it hard to make new decisions. Greece finally has an elected government, but the trouble is far from over.  Even Germany, which certainly enjoys the safe haven status within the zone, is already feeling the economic contagion.

The dynamics in the US have changed as well: as only a catastrophe might move the Fed to QE3, the worsening conditions over there just boost the dollar as a safe haven. All in all, European weakness and US weakness help the dollar. Positive news on both sides of the Atlantic is needed for the pair to rise, and this is hard to find.

4 Reasons to Expect a Disappointment from the EU Summit:

Euro/dollar  reached out to new highs after the Greek elections but couldn't hold on to them, eventually ending lower.  The EU summit is the main event of a busy week, and hopes are high. Will we see another disappointment that will send the pair lower? Here is an outlook for the upcoming events and an updated technical analysis for EUR/USD. Spanish yields made new records and they stabilized thanks to refreshing German flexibility: the EFSF bailout fund will be able to buy bonds directly. The exact manner of how this will work is still to be seen. Spanish stability is…