Euro/dollar  made quite a few attempts to recover, but had no success and eventually ended the week on the edge of the high cliff – a historic support line. Will it fall off?   Forward looking purchasing managers’ indicators, and various surveys fill the agenda this week. Here is an outlook for the upcoming events and an updated technical analysis for EUR/USD.

Spain drew attention: despite the Eurogroup approval of the bailout (with an extended deficit target) and the German approval of the option to directly recapitalize banks, the troubles in the region of Valencia and the skyrocketing yields eventually hurt the euro, that fell on its own. Also Greece returned to the limelight with an official ECB rejection of its bonds as collateral. Even with more weak US data, the dollar couldn’t beat the euro in the race to the bottom.

Updates: EUR/USD dropped to two-year lows on market concerns over the debt crises in Greece and Spain. There are fresh fears of a Grexit as Greece is already on track to miss a debt-to-GDP target, as part of the bailout package. Germany continues to warn that the bailout plan will not be implemented if Greece fails to comply with its obligations under the plan. In Spain, Treasury Minister Cristobal Montoro announced that the recession would last into 2012, and GDP would fall 0.5% in 2013, reversing the original estimate of a 0.2% increase. Meanwhile, Spanish 10-year bonds were trading on Monday at a record 7.37%, well above the 7% threshold which is widely considered unsustainable. The euro dropped below the 1.21 line, but recovered slightly, as EUR/USD  was trading at 1.2119. Euro-zone Consumer Confidence will be released later on Monday. The market forecast stands at -20 points, which is identical to last month’s reading. Euro-zone Consumer Confidence came in at -22 points, its lowest level in  almost three years.  There were a string of PMI releases on Tuesday, and most were disappointing. French, German and Euro-zone Flash Manufacturing PMIs all fell below the market estimate. German and Euro-zone Flash Services PMIs were within market expectations, while the lone PMI which did well was the French Services PMI, which posted a five-month high. The yield on Spanish 10-year bonds continues to set new records, with a current yield of 7.59%. Moody’s reduced the outlooks on Germany, the Netherlands and Luxembourg, although it maintained the triple-A rating of all three coutries. The rating agency stated that countries such as Germany will have to carry the burden of  weaker EZ members, such as Spain and Greece.  The euro continues to test the 1.21 line, as EUR/USD was trading at 1.2095.  There was more bad news out of Germany, as the German Ifo Business Climate fell to 103.3 points, a two-year low raising concerns about the health of the German economy. The yield on the German 30-year Bond Auction dropped, coming in at 2.17%. The euro strengthened on Wednesday, following comments from a senior member of the ECB. Ewald Nowotny, a member of the ECB Governing Council, spoke in favor of providing a banking license to the ESM, the Euro-zone’s bailout fund. Such a move would  provide  the ECB  with more ammunition to  fight the debt crisis. The euro pushed across the 1.21 line, as EUR/USD was trading at 1.2136. GfK German Consumer Climate came in at 5.9 points, matching expectations. German Import Prices disappointed the markets, dropping by 1.5%. M3 Money Supply posted a 3.2% gain, beating the estimate which stood at 2.9%. Italian Retail Sales dropped by 0.2%, slightly more than the forecast of a 0.1% loss. Eurozone Private Loans declined 0.2%, matching the market forecast. Italian Retail Sales dropped by 0.2%, slightly more than the forecast of a 0.1% loss. Eurozone Private Loans declined 0.2%, matching the market forecast. ECB head Mario Draghi will be joining BOE Governor Mervyn King at a conference in London on Thursday. The euro was up sharply following another weak US release. New Home Sales fell below the market forecast, raising hopes that the US Federal Reserve will step in and implement monetary measures to help the troubled US economy. EUR/USD was trading at 1.2260. 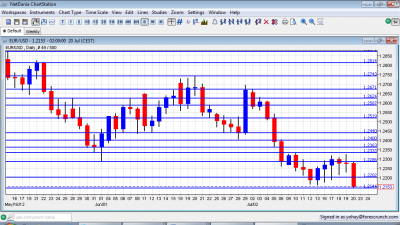 â‚¬/$ made more than one attempt to break higher, but it couldn’t breach the 1.2330 line (discussed last week). It eventually closed lower, just above critical support at 1.2150.

Further below, 1.2330 is another historical line after being the trough following the global financial meltdown in 2008. It’s stronger after working as strong support. The now previous 2012 low of 1.2288 is of higher importance now after being reached twice.

1.22 is now minor resistance, after serving as such in June 2010.  1.2144 is already a very strong line on the downside: it was a clear separator two years ago, when Greece received its first bailout.

Next we have the 1.20 line, which is a round psychological figure. The post crisis low of 1.1876 is the final frontier before lines last seen in the good years.

Everything is working against the euro. When pro-euro Angela Merkel doubts the success of the European project, many eyebrows were raised, in addition to the already mounting pressure coming from Spain. Greece and Italy will likely get more attention, but the competition with Spain is tough.

Weak data in the US is still not enough – Bernanke didn’t provide the necessary QE3 hints, and not for the first time. 1.2144-1.2150 is critical. A loss of this area could trigger a downfall.

Euro/dollar  made quite a few attempts to recover, but had no success and eventually ended the week on the edge of the high cliff - a historic support line. Will it fall off?   Forward looking purchasing managers' indicators, and various surveys fill the agenda this week. Here is an outlook for the upcoming events and an updated technical analysis for EUR/USD. Spain drew attention: despite the Eurogroup approval of the bailout (with an extended deficit target) and the German approval of the option to directly recapitalize banks, the troubles in the region of Valencia and the skyrocketing yields eventually…