Euro/dollar  suffered from another weak week, falling to levels last seen in over 2 years. An important German survey is the highlight this week, as headlines from the debt crisis continue dominating the scene.   Here is an outlook for the upcoming events and an updated technical analysis for EUR/USD.

While euro-zone finance ministers did make some progress in providing aid for Spain, there is still much to be desired. Legal issues in Germany could delay the usage of bailout funds forever. Spain showed everyone that the bank bailout doesn’t really skip the sovereign, and announced a huge austerity program. However, also this failed to lower Spanish yields and just hurt the euro. In the US, the FOMC minutes showed that the appetite for printing dollars isn’t high. All this supports more falls. Will the euro continue grinding lower? Or are we set for a correction?

Updates: Euro-zone and Italian Trade Balances both looked sharp. The Euro-zone Trade Balance hit 6.3 billion, well above the market estimate of 4.8B. Italy showed a surplus of 1.01B, surprising the markets, which had predicted a deficit of 0.97B. Euro-zone CPI and Core CPI posted readings of 2.4% and 1.6%, respectively. Both figures matched the market estimates. German ZEW Economic Sentiment, a key indicator, will be released on Tuesday. The markets are again talking about a possible QE3 in the US, following a weak UoM Consumer Sentiment release last week. Fed head Bernanke will be testifying before a Senate Committee later this week. The euro  was down to start the trading week, dropping below the 1.22 line. EUR/USD was trading at 1.2190. Euro-zone and German ZEW Economic Sentiment were both weak, and both fell below the market forecasts. The EZ reading came in at -22.3 points, much lower than the estimate of -18.3. The German release posted a figure of -19.6 points, lower than the market prediction of -17.3. Weak retail sales numbers in the US helped the euro and raised speculation that the Federal reserve may take monetary easing action. EUR/USD was up sharply, and crossed over the 1.23 line, before giving up some of its gains. The pair was trading at 1.2280. The euro dropped following market disappointment over the Federal Reserve’s lack of monetary stimulus. Speaking before a Senate Committee, Fed Chairman Bernanke acknowledged serious problems with the US economy, but gave no clues about the Fed taking any action. EUR/USD was trading at 1.2245. Current Account sparkled, posting a figure of EUR 10.9 billion. This easily beat the market forecast of 5.3B.    The euro  took a brief hit  after Chancellor Angela Merkel publicly stated that she was uncertain if the Euro-zone would be successful. Although she did  add that  she was “optimistic”, her remarks were enough to spook the already nervous markets. In Spain, bond yields continue to climb. Following Thursday’s government bond auction, the yield on 10-year bonds jumped to 7.02%, above the critical 7% threshold which analysts consider unsustainable. The  euro  has rebounded, crossing the 1.23 line. EUR/USD was trading at 1.2305. The markets are anxiously awaiting three key releases out of the US  later on Thursday – Unemployment Claims, Existing Home Sales, and the Philly Fed Manufacturing Index. 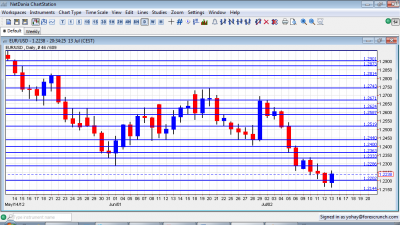 â‚¬/$started the week with a small recovery attempt, but this met the 1.2330 line (mentioned last week). From there, it was all downhill as the pair gradually lost ground, getting close to the critical 1.2150 line.

We start from lower ground this time. 1.2623 is the previous 2012 low and remains important despite recent battles over this line. Below, 1.2587 is a clear bottom on the weekly charts but is only a minor line now.

Further below, 1.2330 is another historical line after being the trough following the global financial meltdown in 2008. It proved its strength by capping a recovery attempt in July 2012. The now previous 2012 low of 1.2288 is of higher importance now after being reached twice.

1.22 is a round an important line that served as support back in June 2010.  1.2150 is already a very strong line on the downside: it was a clear separator two years ago, when Greece received its first bailout.

Next we have the 1.20 line, which is a round psychological figure. The post crisis low of 1.1876 is the final frontier before lines last seen in the good years.

Nothing has been solved in the EU Summit or the Eurogroup meeting. Spain is walking the same dead end path of harsh austerity, and Italy may also need some help soon. Both these large countries are suffering from unsustainable high yields for too long. After the recent elimination of the deposit rate by the ECB, money continues flowing out of Europe.

In the US, the situation is mixed. For example, jobless claims fell sharply, but another figure favored by Bernanke shows that job growth has practically stalled. This  environment  is perfect for the dollar: the US isn’t a global locomotive, therefore not encouraging risk. So, the dollar is a safe haven. On the other hand, things aren’t bad enough to trigger QE3 that will devalue the dollar. Unless there is something totally unexpected, there is more room on the downside for EUR/USD, in a gradual move. 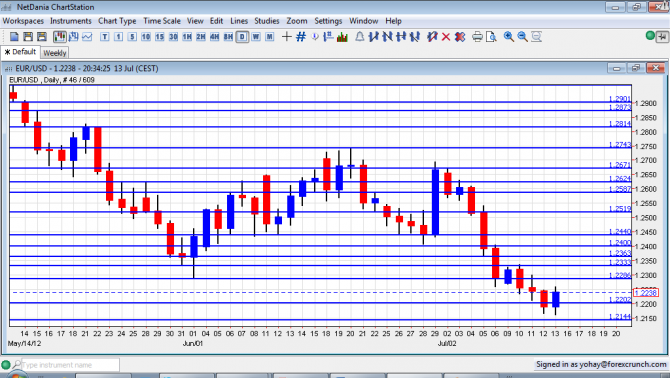 Euro/dollar  suffered from another weak week, falling to levels last seen in over 2 years. An important German survey is the highlight this week, as headlines from the debt crisis continue dominating the scene.   Here is an outlook for the upcoming events and an updated technical analysis for EUR/USD. While euro-zone finance ministers did make some progress in providing aid for Spain, there is still much to be desired. Legal issues in Germany could delay the usage of bailout funds forever. Spain showed everyone that the bank bailout doesn't really skip the sovereign, and announced a huge austerity program.…